“Same Great Taste”… Now Triple the Disease
According to a new study, people who drink diet sodas daily have three times the risk of having dementia or a stroke than those who rarely drink them.
Read More

You might want to rethink popping open that can of diet soda in the break room – your brain will thank you. According to a new study, people who drink diet sodas daily have three times the risk of having dementia or a stroke than those who rarely drink them.

The study published by the American Heart Association’s journal Stroke was conducted by researchers from Boston’s University School of Medicine, and backs up what previous studies have shown over the years about how bad for your health soda and diet soda really are.

The study examined “beverage intake of 2,888 people over the age of 45 for its stroke analysis and 1,484 people over the age of 60 for the study’s dementia analyses.” For seven years, researchers questioned participants at different points in time about their diet soda intake. They then followed up with participants over the following 10 years on who had suffered a stroke or dementia.

This is the first study of its kind to show a correlation between drinking soda sweetened with artificial sweeteners and an increased risk of dementia. The team did not however find the same risk with sugar-sweetened beverages. Not surprisingly, the American Beverage association which lobbies for the soda industry released a statement to NBC arguing against the study, saying “the Alzheimer’s Association points out that the greatest risk factors for Alzheimer’s are increasing age, family history of Alzheimer’s, and genetics — not sugar intake, from any source.” 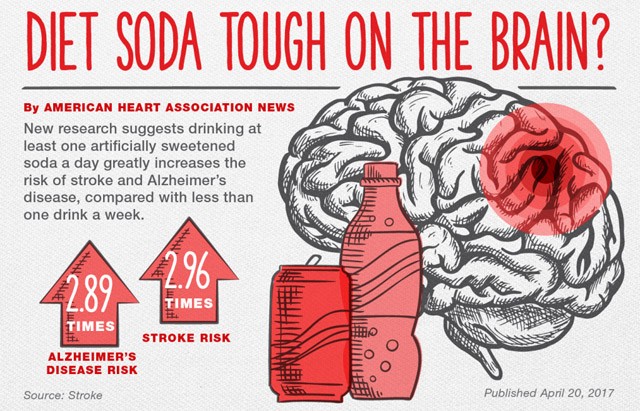 Diet soda has been gaining popularity for years over traditional soda with its zero-calorie marketing, promoting a false idea that it’s a healthy choice. It’s been estimated that the average American drinks 44 gallons of the syrupy brown beverage a year. The idea that opting for a diet soda over a traditional soda because it’s somehow healthier is an equally dangerous trade-off. Artificial sweeteners are often sweeter than sugar and trick your brain into wanting more. They confuse the body’s ability to manage calories, and can actually have the opposite affect of a “diet” drink, lead to weight gain and contribute to type 2 diabetes.

“A lot of people assume they must be healthy choices because they are not sugared beverages, but the critical thing for people to understand is we don’t have the evidence,” Professor Susan Swithers, from the US’s Purdue University told the BBC.

This doesn’t mean that you should switch back to chugging down regular cans of Coke and Pepsi. Regular soda is just as bad for your body and contributes to a number of problems, from diabetes to weight gain, heart disease, and a serious assault on dental health.

While most doctors would prefer that you just cut soda of every form out of your diet altogether, a lot of people aren’t going to do that. Dr. Mehmet Oz recommended on the Today Show, that if you want to indulge in the drink every now and then, try to cut back to just one a week and dilute your soda with some seltzer water. “You’ll be surprised that it still taste good enough.”