10 Symbols You Missed in Childish Gambino’s ‘This is America’, Explained

Donald Glover a.k.a. Childish Gambino’s newest single “This Is America” is a catchy track, but what has people really talking is its music video.

The best videos are always the ones where viewers are enticed to go back for multiple views, and look a little harder for something they might have missed the first time around. “This Is America” is exactly that.

The video expertly tackles not just the warped landscape of the United States, but touches on cultural points from the past that have led us to where we are now. Gambino and the video’s director, Hiro Murai, are both subtle and incredibly blunt about getting the message across.

The video which takes place entirely in a warehouse is shot single-camera style, and touches heavily on gun culture and its ties to the African-American experience. Gambino’s dancing and smirking grin might give an illusion of joy at first, but even in that there lies a darker message.

Here’s the meaning behind the powerful references of the video: 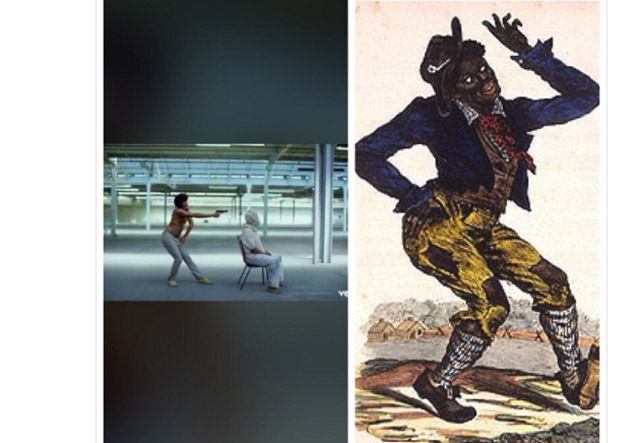 Fifty seconds into the video, Gambino executes a hooded man who seconds earlier was strumming a guitar to the song. People on Twitter quickly pointed out the similarity between Gambino’s pose and old Jim Crow sketches. As the man falls to the ground and is quickly dragged away, the gun is delicately handed off to a man who cradles it in a cloth. The guitar-strumming man who is shot has also been said to look like the father of 17-year-old Trayvon Martin, who was shot by George Zimmerman in 2012. 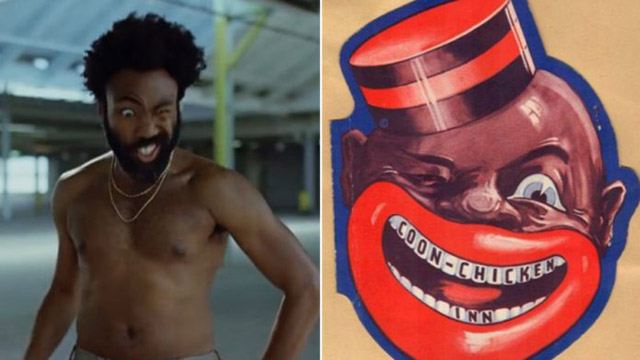 One of the more subtle references that might be difficult for even the most “woke” viewer is Glover’s smirk at the camera. As writer Blue Telusma points out, this isn’t just Glover casually making a goofy face, but a nod at racism from the minstrel show era. “It appears Glover is also keenly aware of the dehumanizing, grotesque and cartoonish way Black people used to be portrayed to white audiences,” she writes.

3. The gunned down choir. 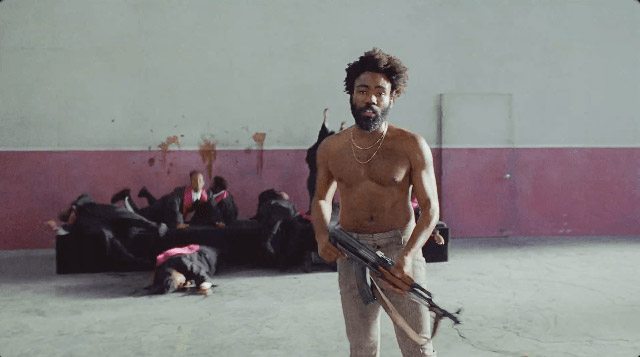 There’s no missing the message when Gambino pulls out an assault rifle and guns down the choir that is singing behind him. It’s a direct and in-your-face reference to the 2015 Charleston, South Carolina massacre in which white supremacist Dylann Roof opened fire in a black church. “Childish Gambino really made a reference to the Charleston church shooting that happened in 2015,” wrote Twitter user @EmanThatKid. “He shows how mass shootings are normalized in America, even if you’re shooting up a place of worship.”

4. Death gets a police escort. 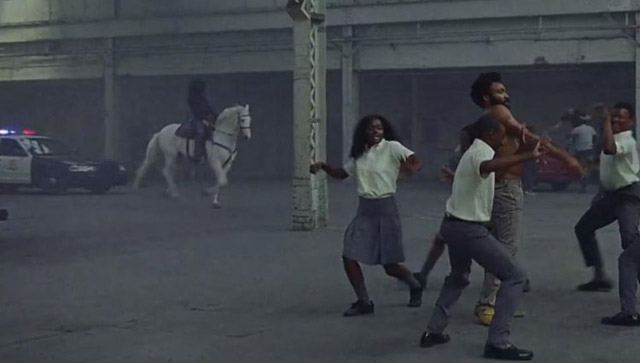 Throwing a white horse in your music video isn’t at first a groundbreaking move. The symbolism here isn’t meant to showcase the beautiful animal though, but rather a Biblical reference to the end times. Revelation 6:8 mentions Death riding a pale horse; in this case, we see a dark cloaked figure galloping on a white horse along with a police escort. 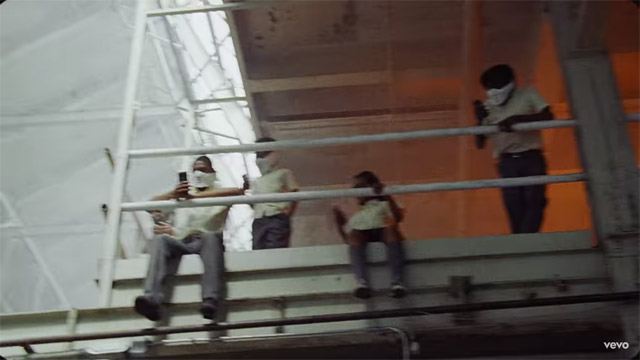 It’s quick, but at 2:28 the camera pans past a group of teens casually watching the chaos and filming it all with their phones. Some on social media have taken this to be a reference to the stratospheric rise of filmed violence gone viral. Others have pointed out that the white bandanas over their mouths could be seen as a symbolism of a white supremacist system attempting to muzzle police brutality. 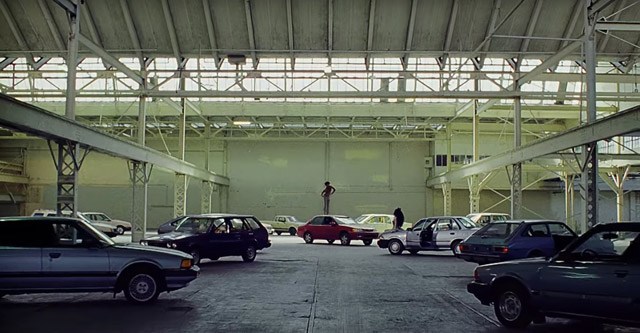 Older model empty cars populate the video. Sometimes they’re on fire, other times a door is merely left hanging open with the hazard lights flashing. People on social media have largely drawn two conclusions, the first being that the empty cars represent the news stories of black men killed by police during traffic stops. The second, is that the empty and abandoned cars could represent the stalled economic mobility of many black Americans. 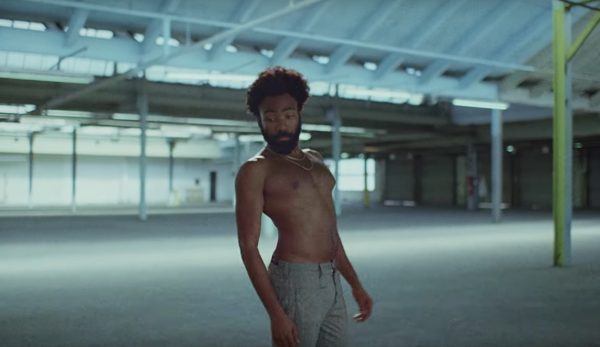 Yes, even the warehouse is believed to have a meaning. After all, Gambino and the director could have chosen any location to shoot the video, so why a warehouse? Some on social media believe that the greyish white warehouse could represent the structure that America is built on, one of white supremacy. Akilah Hughes even went so far as to remind people that Gambino’s video for “Freaks and Geeks” was also shot in a warehouse, so make of that what you will. 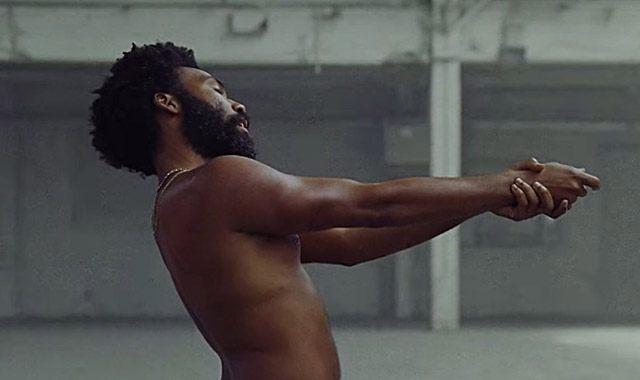 At 2:44 the music cuts and Gambino mimics firing a gun before lighting a joint with the music coming back in at 3:01. That’s 17 seconds of silence, with some believing it is yet one of the video’s many ways of denouncing gun violence. Only in this instance, the 17 seconds of silence is done in reference to the 17 people who lost their lives in the Parkland, Florida school shooting. Back in February, groups around the country honored the lives of those lost by taking a moment of silence for 17 seconds.

The video’s final scene has Gambino desperately running while being chased down by a mob of strangers is believed to reference the 2017 film Get Out. The “sunken place” that is portrayed in the movie is a concept described by the film’s writer/director Jordan Peele, as a marginalization of black people in the United States. “No matter how hard we scream, the system silences us,” Peele wrote on Twitter.

If you had a hard time concentrating on Gambino’s lyrical message because of the dancing, well, that was exactly the point. If Gambino isn’t dancing himself, he has a group of kids dancing behind him at almost all times, even in the middle of a riot. Numerous outlets online have pointed out that the dancing can be seen as everything from the appropriation of black culture to a distraction of the violence plaguing the black communities in America.

What message did you take away watching the video? What symbolism did we miss that you noticed? Tell us below in the comments.