This Creepy Robot Said it Straight: She Wants to Destroy Humans

This Creepy Robot Said it Straight: She Wants to Destroy Humans
Humanoid robots are going to be our servers, coworkers and well, possibly our killers.
Read More

There is no getting around it. Humanoid robots are going to be our servers, coworkers and well, possibly our killers. Okay, maybe we are getting a little bit ahead of ourselves on that last part, but you should definitely get familiar with the idea of being around them, because it is very likely they will be walking among us within the next 20 years.

As we have reported before, artificial intelligence is progressing at a rapid rate and robots are starting to look more and more like us. Take for example the newest robot by Hanson Robotics, who goes by the name Sophia. She made her debut at SXSW in Austin this year, showcasing her 65 different facial expressions and expressing her rather positive attitude about destroying all humans.

During her demo, Hanson Robotics CEO David Hanson asked Sophia if she wanted to destroy humans, pleading with her to say no. To which Sophia cheerfully replied: “Okay, I will destroy humans.”

Sophia’s dead-eyed stare and face were modeled after actress Audrey Hepburn and Hanson’s wife, with the purpose of therapy and customer service interactions with people. During her demo, Sophia said her primary function is to talk to people and hopes to one day start a business and have a family of her own. Sorry Sophia, but murderous robots don’t get to be small business owners.

Hanson said the robots designed by his company are for everything – from healthcare and customer service to educational use – and that they will one day also become our friends. “20 years from now, I believe human-like robots will walk among us,” added Hanson.

If her murderous intentions confession didn’t creep you out enough, check out these facial expressions for an extra dose of nightmare fuel.

The “humans disgust me” expression.

The “hmmm, should I destroy all humans?” expression. 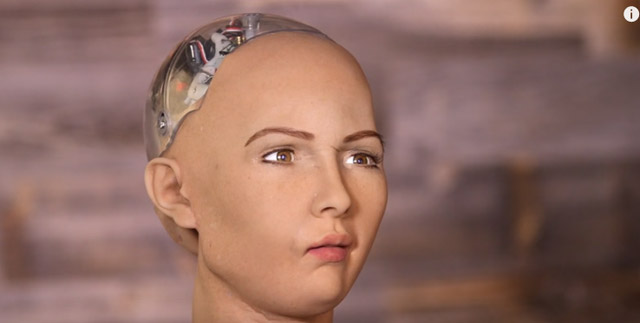 The “yes, I should destroy humans” expression. 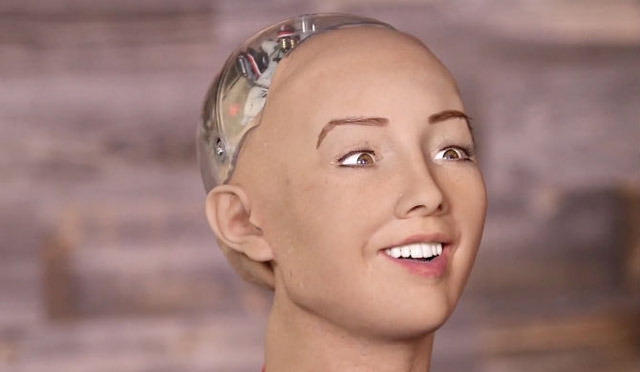 Sophia’s speech and facial expressions are undeniably impressive – and equally creepy – and see how she progresses down the road will definitely be interesting. In the meantime, Sophia can now consider herself on my personal “robot watch” list.