In China’s Qinghai Province near Mount Baigong is a mysterious pyramid with three caves that lead to a saltwater lake. Under the lake bed and on the shore are iron pipes ranging in size with some being as small as a toothpick that are around 150,000 years old. What is baffling Chinese historians is that the area wasn’t thought to have been occupied by people until around 30,000 years ago. And according to historians, the humans that were around were nomads, thus making it unlikely that they would have taken the time to install plumbing. That leaves a 120,000 year gap of “who was here laying down iron pipe?” 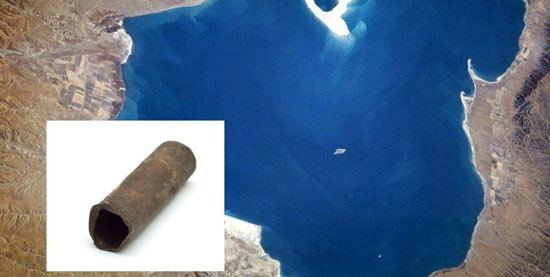 Yes, it’s a far-fetched possibility, but the Chinese Academy of Social Sciences isn’t ruling it out. Research fellow, Yang Ji told Xinhua News Agency the pyramid may have been built by intelligent beings. He didn’t dismiss the theory that ancient extraterrestrials may be responsible as complete hogwash, but said “it’s worth looking into and science would have to determine if there’s any truth.” Okay, so now that we’ve got the obligatory space alien theory out of the way, what about more likely theories?

The investigation into the pipes began in 2002 with some researchers believing the pipes were left over by a prehistoric civilization whose techniques were later lost to the humans that moved into the area. Around the pipes leading to the area are “strangely shaped stones” protruding from the ground that are confusing historians even more. 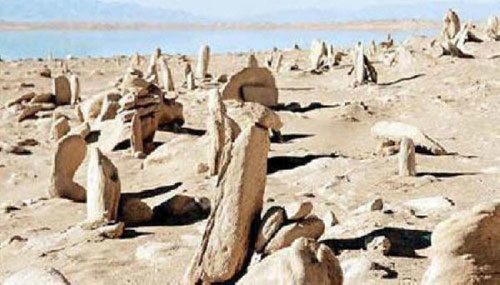 Are they even pipes?

So weird rocks are protruding from the ground and the pipes can’t be traced to a known civilization. If that wasn’t strange enough, scientist aren’t entirely sure what they’re made of. While the pipes are believed to be mostly iron, the head of publicity for the local Delingha government told reporters that the pipes were analyzed at a local smeltery and 8 percent of the material could not be identified. The remaining material was a combination of ferric oxide, silicon dioxide, and calcium oxide which are byproducts of a long interaction between iron and the surrounding sandstone. In 2007 it was discovered that some of the pipes also showed traces of radiation.

One final theory is that they aren’t even pipes at all but fossilized tree roots. Fossilized tree roots of similar structure have been found in Louisiana and scientists found plant matter in some of the pipes and it looks very similar to tree rings. It’s a long-standing geological theory that in certain temperatures and under certain chemical conditions, tree roots can undergo the transformation of soil into rock and in time, produce iron formations.

So, are they pipes laid down by an ancient tribe or space aliens? Or are they the result of iron-rich magma forcing its way up through the earth into fissures, or just fossilized tree roots? Whatever the case, the “oopart” (out of place artifact) is certainly a source of puzzlement and wonder for conventional scientists and historians alike.