Audi Has Created an Eco-Fuel Made Only From Water And Air
The car company is about to roll out a fuel option never seen before.
Read More

As more and more car companies explore alternative fuel options, the varieties of energy to power cars of the future is looking better than ever before. The latest of those is an “e-fuel” designed by scientists with Audi, which is carbon-neutral and made from water and carbon dioxide.

Yep, it’s completely fossil fuel free, and while its still in its early developmental stages, researchers are hopeful for creating a much more eco-friendly combustible engine that runs on the fuel. “Synthetic diesel using CO2 is a huge success,” says Germany’s Federal Minister of Education and Research Johanna Wanka. The plant set up by Audi in Dresden, Germany and run by clean tech company Sunfire, is reportedly going to start pumping out 160 liters of the synthetic diesel every day in the upcoming months.

Using a three-step process, the scientists are able to create the base product of the fuel, called Blue Crude. Making the fuel involves first, harvesting renewable energy from sources such as wind, solar and hydropower. The energy is then used to split water into oxygen and pure hydrogen. From there the hydrogen is mixed with carbon monoxide that is created from carbon dioxide that’s been harvested from the atmosphere. When the two react at high temperatures under pressure a long-chain hydrocarbon compound is formed, making up the blue crude.

It’s then refined and can be used to power an engine on its own or mixed with regular diesel fuel. Here’s what the scientific process looks like. 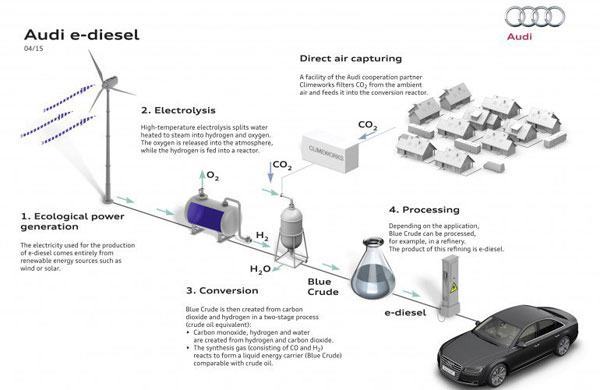 Alternative powered cars are already beginning to hit the roadways and will only become more common in the future. Toyota is launching Mirai next year, a four-door hydrogen-powered sedan that can go up to 300 miles on a tank and emits nothing but water vapor.

It’s exciting to think that it might one day the norm for gas stations to offer alternatives to harmful petroleum-based gasoline and motorists can fill up on a fuel that doesn’t create as much pollution. We’re still probably pretty far off, but Audi’s chief of sustainable product development, Reiner Mangold is committed to the cause. “We are promoting another fuel based on CO2 that will allow long-distance mobility with virtually no impact on the climate.”