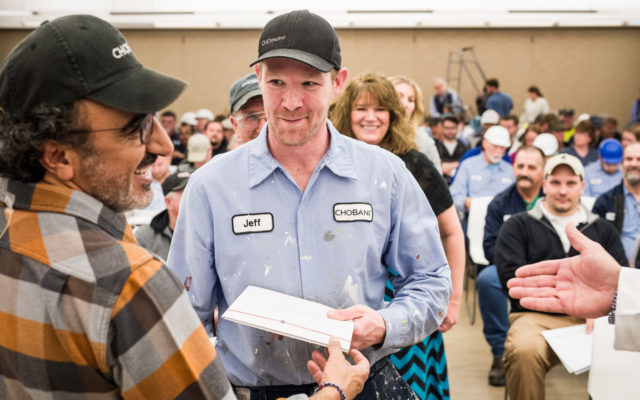 Chobani CEO Just Did What Every Employee Would Ever Dream Of

Chobani CEO Just Did What Every Employee Would Ever Dream Of
It's been a good week for Greek yogurt, or more accurately, for the employees of Greek yogurt company Chobani.
Read More

It’s been a good week for Greek yogurt, or more accurately, for the employees of Greek yogurt company Chobani. The company’s founder, Hamdi Ulukaya, shocked his employees last Tuesday and likely sealed his title as “boss of the year” when he made the announcement during a company meeting that all of his full-time employees would have an ownership stake in the privately held company. And if the company, which produces more than $1 billion in revenue a year goes public, some of those employees could find themselves with a pay bump worth hundreds of thousands of dollars.

“We used to work together. Now, we are partners.” – Chobani CEO, Hamdi Ulukaya

The announcement was met with surprised looks from employees at the company’s factory in upstate Berlin, New York. Those looks of surprise soon turned into smiles and even tears of joy, as Ulukaya explained that an ownership grant was always part of his company dream and that it wasn’t a gift, but a mutual promise to work together to create something of lasting value.

It’s a grand gesture for certain, but perfectly in-line with Ulukaya’s reputation for being a man of outspoken civic duty and generosity. Ulukaya started the company in 2007 with just five employees after immigrating from his native Turkey, and has hired hundreds of Syrian refugees that makeup his workforce of 2,000 employees. Ten percent of the company’s profits go to charity. “I’d like to give back to them and say, ‘You and this community and America have been so great to us, that I’d like to return the favor'” Ulukaya told NBC. 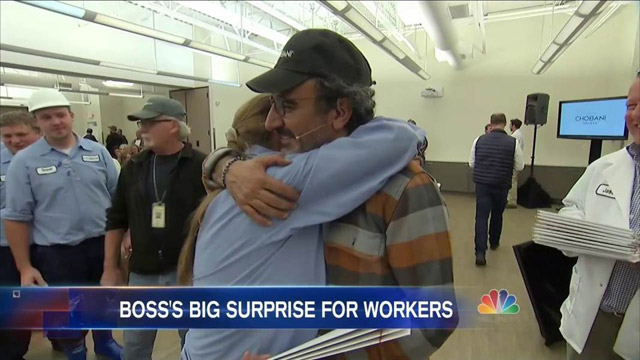 Ulukaya knows though, that a minimum wage raise isn’t a solution to the problem of economic inequality and really only affects a small percentage of the workforce. Figuring out a program that would really benefit his full-time employees and let them know that they truly have a stake in the company’s success was crucial, according to Chobani spokesperson, Michael Gonda. “One of the hardest things to do for a program like this, is when you have 2,000 employees that you want to participate in it, is figuring out that allocation” Gonda told NPR. “Obviously, time and role at the company have a huge part to play, but this is a very personal part of the process for Hamdi, and he spent a lot of time going through that.”

While Chobani’s promise of stock ownership awards – which will makeup around 10% of the company’s estimated $3 billion value – aren’t typical business moves, there is a growing trend in employee stock ownership plans. Companies such as Whole Foods, Schreiber Foods and Starbucks, have launched their own ESOPs, though not with the reward potential of Chobani. It’s estimated that should Chobani go public, the average employee stock award could be worth as much as $150,000 with long-standing employees possibly landing stocks worth $1 million. ESOPs like Chobani’s have been almost common place in the world of Silicon Valley, where startups like Google and Facebook made millionaires out of their first employees through similar share programs. One likely reason that such plans are starting to see an increase is that it provides a way for soon-to-be retiring baby boomers to pass down ownership, as well as tax benefits.

What makes Chobani’s new rewards rollout, is unlike tech startups, Chobani is offering its employees a piece of the company after its success is firmly established, but before it’s on the stock market. For Ulukaya, who started the company with a loan from the Small Business Association in an old Kraft yogurt plant with his mother’s strained yogurt recipe, this is simply a way to show his gratitude for the company’s success. And for Chobani workers like Rich Lake, it’s the most generous gesture an employee could ask for. “It’s better than a raise,” said Lake. “It’s the best thing because you’re getting a piece of this thing you helped build.”