This Awesome Lab Saved the Life of a Boy Lost in the Wild
If you need any confirmation about why dogs are man's best friend, just read this.
Read More

If you need any confirmation about why dogs are known to be man’s best friend, just ask 14-year-old Juan Heriberto Treviño. The teen has a labrador retriever named Max to thank for saving his life in the wilderness of Mexico’s Sierra Madre Oriental mountain range.

Juan was attending a summer camp just like thousands of kids each summer, when he became separated from his group while collecting firewood and fell down a ravine. Disoriented by the fall, the teen was stuck in the ravine without being able to alert anyone from his camp. What could surely have resulted in a tragic ending was avoided when a lab named Max followed the teen into the ravine. For the next two days, Max didn’t leave Juan’s side and helped keep him alive until rescuers could find them.

The two walked for several hours trying to find a way out of the ravine and back to camp, until it became too dark and were forced to wait for daybreak. As the teen slept under a tree, Max slept on the boy’s legs to help keep him warm through the night. Juan told the Spanish language news service Noticieros Televisa, that Max’s presence made all the difference that night in the wilderness. “I grabbed [Max] and put him on my legs to not be so cold, and hugged him,” he said.

When the sun rose, the pair set out once again in search of rescuers, with Max finding a source of water along the way to help them both stave off dehydration. Eventually, after 44 hours in the wilderness, the teen and the dog were spotted by two men on horseback, who said the boy ran and hugged them upon finally seeing them. 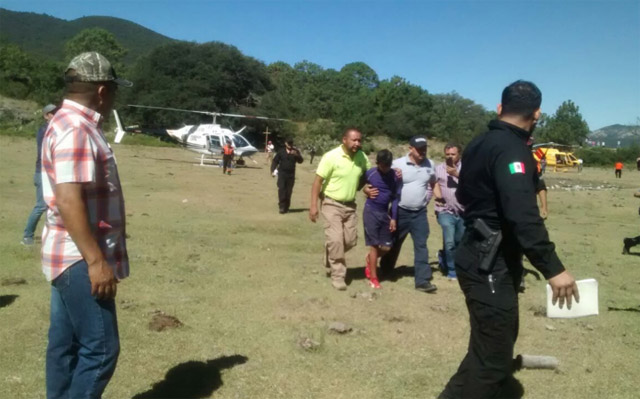 Martin Castillo, deputy director of the local police, noted how lucky the teen was to have Max with him for support and how easy it is to become lost in the mountain range. “In that part of the mountain it is very easy to get lost. In addition, it’s very cold at night, as it is very high,” Castillo said. Both Juan and Max were tired and thirsty upon being rescued, but lucky to be alive and happy to be at the end of their harrowing ordeal, added Castillo.

The family of the teen was so grateful for the dog’s guidance that they were willing to make Max a permanent part of their family, before learning that Max already had a home with a family in the area.

This story of a dog going above and beyond to help a person in need is far from a rarity. In fact, Max is just one of a number of amazing canines that have helped out both their owners and strangers in times of need.

Last year, a Scottish dog named Rauour helped find a woman in the middle of a blizzard who had fallen in the hole left by a tree’s roots, and became unconscious due to hypothermia. “Without him finding the casualty when he did, the outcome could have been very grave indeed,” said Rauour’s handler, John Romanes.

Dogs haven’t shown their heroism only in the wild. Earlier this year in Monterrey, Mexico, a golden retriever named Rosco sustained burns to its body when it stayed in the house during a fire to ensure a four-year-old child made it out safely. Thankfully, both the child and the dog survived and were quickly reunited with their family.

If you need to take a minute to wipe your eyes and then give your own dog a hug, we totally understand.