Should We Redesign Our Hospitals to Improve Staff and Patients’ Lives?

Should We Redesign Our Hospitals to Improve Staff and Patients’ Lives?
The 'healing by design' approach could shape the hospitals of the future.
Read More

A visit to the hospital is certainly far from pleasurable. In addition to the burden of pain, discomfort and embarrassment that is associated with our ailment, we are further troubled by the prospect of spending many days and nights in an unfamiliar and unsettling environment. However, the healing by design approach to hospital construction is looking to turn that around— and it’s having widespread success.

Healing by Design at Maggie’s Centre in the UK

Maggie’s Newcastle is a cancer treatment and support facility located on the lush grounds of Freeman Hospital, Newcastle, UK. It boasts a range of attentively designed and meticulously constructed architectural features that are not only aesthetically pleasing and spatially intuitive, but ultimately crafted to improve patient well-being.

The center is named after writer, artist and garden designer Maggie Keswick Jencks. During her two-year battle with cancer, she formulated a new type of care that focused on the potential of one’s environment to aid in recuperation and healing. According to BBC Future, Jencks believed that “people should not lose the joy of living in the fear of dying.”

Interior designer for Maggie’s Newcastle, David Wallace took Jencks’s vision to heart. “Everything that the visitor to the center encounters is reassuring, honest, stimulating. There is a place to rest at the entrance – to pause, to be welcomed and to take in the surroundings. The interior is unlike a clinical environment. It feels very domestic – there’s no signage, for example. The textiles are interesting and colorful. The experience is disarming, human,” he said.

A vast improvement to current facilities

Many of today’s healthcare facilities consist of a depressing labyrinth of dispassionate rooms, corridors and stairwells not too dissimilar to a cold, dingy, clandestine bomb-shelter or perhaps even a cheap, washed-out highway hotel. The common hospital environment of today— the sights, the smells, the sounds— is uninspiring to say the least.

In one article published by Gizmodo, a cancer sufferer named Simone related her hospital experience. “Some of those corridors really give you the creeps. They’re those sort of beige magnolia colors, the sort of slightly sick vomity color… and that feeling of being really claustrophobic. And the waiting rooms… you were all sitting almost like on a bus,” she said.

She later received treatment at a Maggie’s Centre. Her experience was in complete contrast to any other of her previous experiences. “The light, the kitchen table, everything is so welcoming and so inclusive… People can walk in here and come in anonymously… if you just want to sneak in and make a cup of tea you can do that. Usually somebody will smile at you, but no one will force you to do anything,” she said.

JJ, who also received treatment at a Maggie’s Center, explains, “there’s places you can disappear to as well. I used to go and have a little sleep. I don’t do much here, I like to soak it all in. I’ll sit and talk to people, sit in the garden and absorb the weather. It’s therapeutic.” 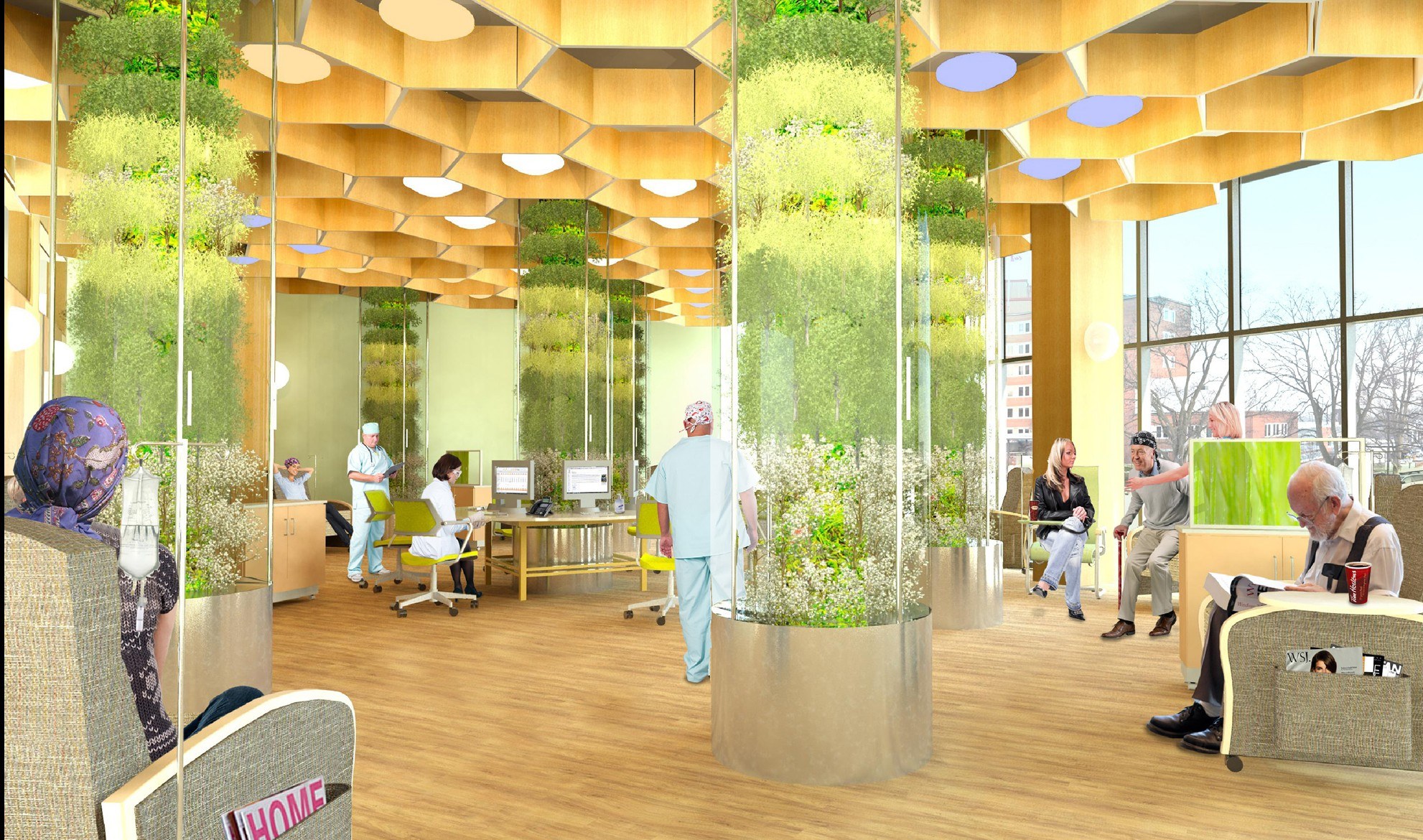 Evidence validates the principle of Healing by Design

Indeed, there is a growing body of evidence that suggests that enhanced hospital architecture and design can make a huge difference to the patient experience. It can also have a positive effect on patient recovery times and health outcomes.

For example, one study found that morning sunlight reduces the length of hospitalization in cases of bipolar depression. Another study suggested that patients tend to require fewer medications for anxiety when photos of landscapes line hospital walls rather than abstract art, or rather than being left bare. And another one reported improvements in a patient’s pain tolerance when they watched videos featuring natural scenery during treatment as opposed to watching a blank screen. One report even suggested that better hospital design can reduce staff stress and fatigue and increase effectiveness in delivering care.

The Healing by Design principle influences many new construction projects

These positive results are inciting many of the world’s leading hospitals to re-think the way they design their facilities. The new expansion of Lucile Packard Children’s Hospital, Stanford, for example, incorporates ‘3.5 acres of garden and green space, complementing the original building’s numerous terraces and green-lined walkways’ and ‘a floor-to-ceiling sloping glass wall that looks out to the Emerald Garden; an imaginative, open garden space that features a sea-themed play area and an amphitheater for activities and events.’

Like Lucile Packard Children’s Hospital and Maggie’s Newcastle, many healthcare facilities are incorporating this idea of healing by design into their construction projects. The principle will re-shape the hospitals of the future— undoubtedly improving health outcomes for many of the world’s citizens in years to come. 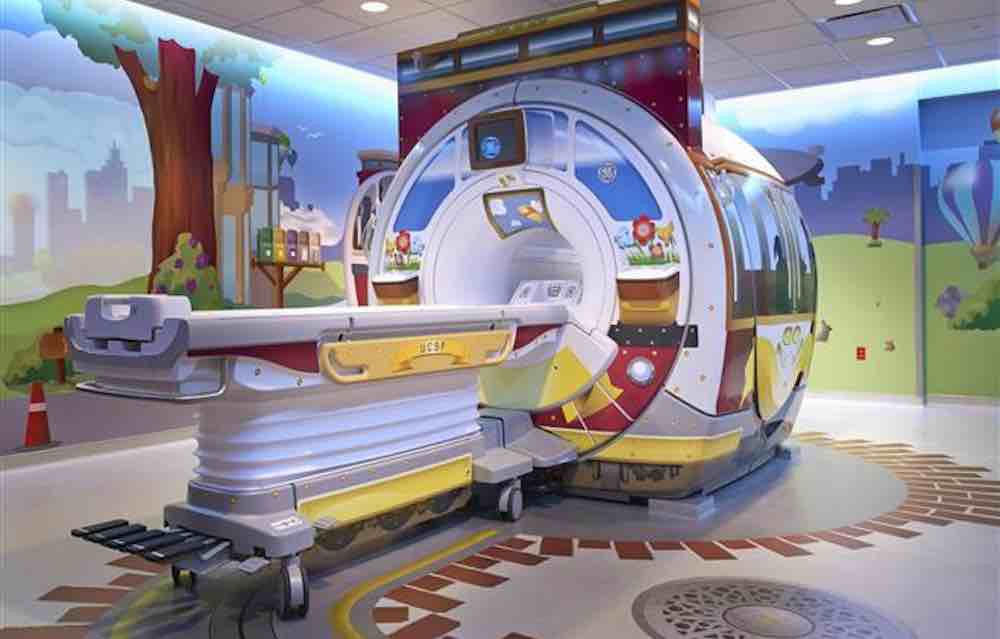 MRI scanner for children at the University of Pittsburgh Hospital.