How Detroit is Becoming a Leader in Green Infrastructure

How Detroit is Becoming a Leader in Green Infrastructure
Read More

Like many parts of the United States, the Great Lakes region has a deteriorating water systems infrastructure in need of a face-lift. Not just a face-lift of repaired pipes, but a total overhaul and new way of filtering and bringing water to communities, because the old way is terribly flawed.

In many communities across Michigan, storm water, wastewater systems, and municipal water are managed by separate entities with separate funding, regulation, and in many cases have personnel who may not even meet. Because of this system many lakes, rivers, and streams have become choked with sediment contributing to an ecological degradation of the area as well as increased water treatment cost from plants, having to use more energy to export water to other communities because their own aquifers are tapped.

Michigan faces a great challenge in changing the way it handles its water treatment and distribution, but Detroit is on a comeback trail and working to change that, switching out grey infrastructure (pipes and concrete storage tanks) for a green infrastructure that uses the natural relationship of plants and rainfall. As part of the Detroit Future City initiative, people like Dan Kincaid, director of projects, are working to change the framework of Detroit. Dan believes that because of Detroit’s abundance of vacant land they have an advantage over most cities, and he plans on putting that land to use. 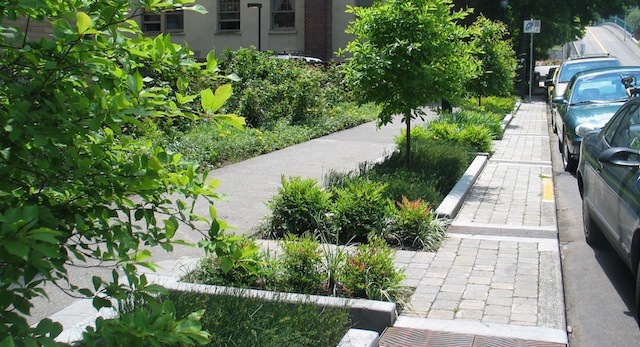 “First, as an adaptive reuse mechanism for vacant land in the city; to complement existing fixed infrastructure, reduce existing and future capital and operational costs, provide better stormwater management and reduce our combined sewer overflows,” he says. “The second is to understand how Detroit can become a leader in deployment of green infrastructure, and how that can begin to have a multifaceted impact, not just regarding stormwater management and CSO’s, but also for energy production, water storage, air quality and to reduce the urban heat island effect.” 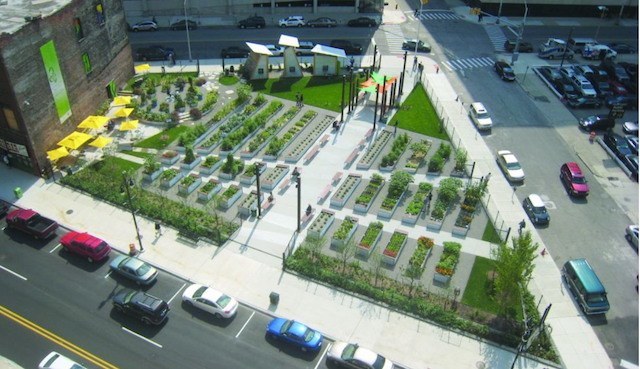 Not only would building up the city’s green infrastructure work to reduce operational costs and provide better water service, but proponents of the plan also believe it could help control flooding. In August of last year Detroit was pummeled with over 6 inches of rain in the course of a week, and advocates for the city’s green infrastructure say that an improved system of trees, gardens and ponds built to retain rainwater could have made a difference. “Whenever you get 5 inches of rain in a three-hour period, it’s difficult for any kind of system to be able to manage that,” said Chris Dorle of the Detroit Future City Implementation Office. Chris added that a network of of more natural water retention systems would have helped to reduce the impact of the flooding.

With $2 million in federal funding, the Detroit Future City office has begun changing 30 to 50 vacant lots into green spaces and are working with the Detroit Water and Sewerage Department to finalize plans to implement more green strategies. Chris says its about managing the storm water flow and adding extra natural greenery to concrete islands and believes that a more natural system is overall the best system. For a city like Detroit that has fallen on hard times over the last decade, the future is looking greener than ever.