How the Internet is Trying to Break the White Supremacy Movement

The violent protests of white supremacists and self-described neo-Nazis in response to the removal of a Robert E. Lee from Charlottesville have deeply shocked and disappointed people across the globe. However, amidst the appalling displays of racism, deadly clashes, and underwhelming comments from US President Donald Trump, there seems to be one effective avenue to quieting the chorus of bigotry: deconstructing the foundations of their Internet presence.

Earlier this week it was announced that the world’s largest domain registration and hosting service, GoDaddy, would be giving white supremacist news and commentary website The Daily Stormer 24 hours to move to another domain provider before shunting them from its platform. Engadget has reported that GoDaddy’s announcement came in response to outcry on Twitter from co-founder of The New Agenda, Amy Siskind, who drew attention to the hateful and obscene language that the Daily Stormer published describing the late Heather Heyer. 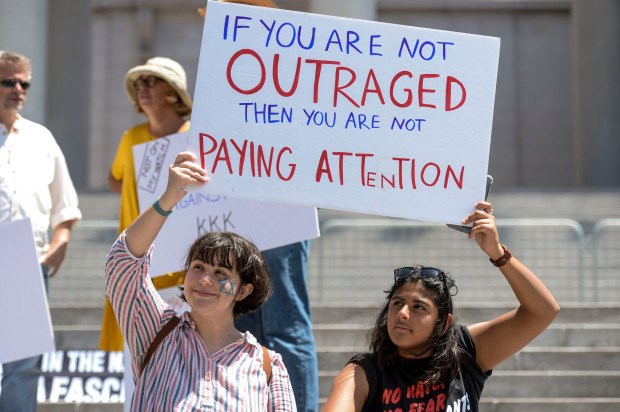 Heyer was killed when struck by a vehicle that ploughed into a crowd protesting against the white nationalist march, and whilst many mourned her tragic loss, Daily Stormer editor Andrew Anglin described Heyer in the wake of her murder as a “drain on society” (and far worse but, as is the general rule for all neo-Nazi rhetoric, it is not worth repeating). GoDaddy explained its decision by stating that “this latest [Daily Stormer] article comes on the immediate heels of a violent act” and that it “could incite additional violence, which violates our terms of service”. Whilst the decision is clearly a step in the right direction for quelling this violent breed of racism, Twitter users have also noted their disappointment that it took GoDaddy until this week to remove the site from their service, when they have explicitly described their organization as “The World’s Most Genocidal Republican Website” for months.

The problems for the Daily Stormer did not end there, however, and the site was rapidly shunted from Google in the hours after they were dropped from GoDaddy. The Daily Stormer attempted to use a Google domain in order to salvage their site and were sternly barred from the service, with the company stating that they were “violating our terms of service”, according to the Guardian. As of press time, the Daily Stormer website is currently inaccessible by any means, which this journalist can report as deeply satisfying. 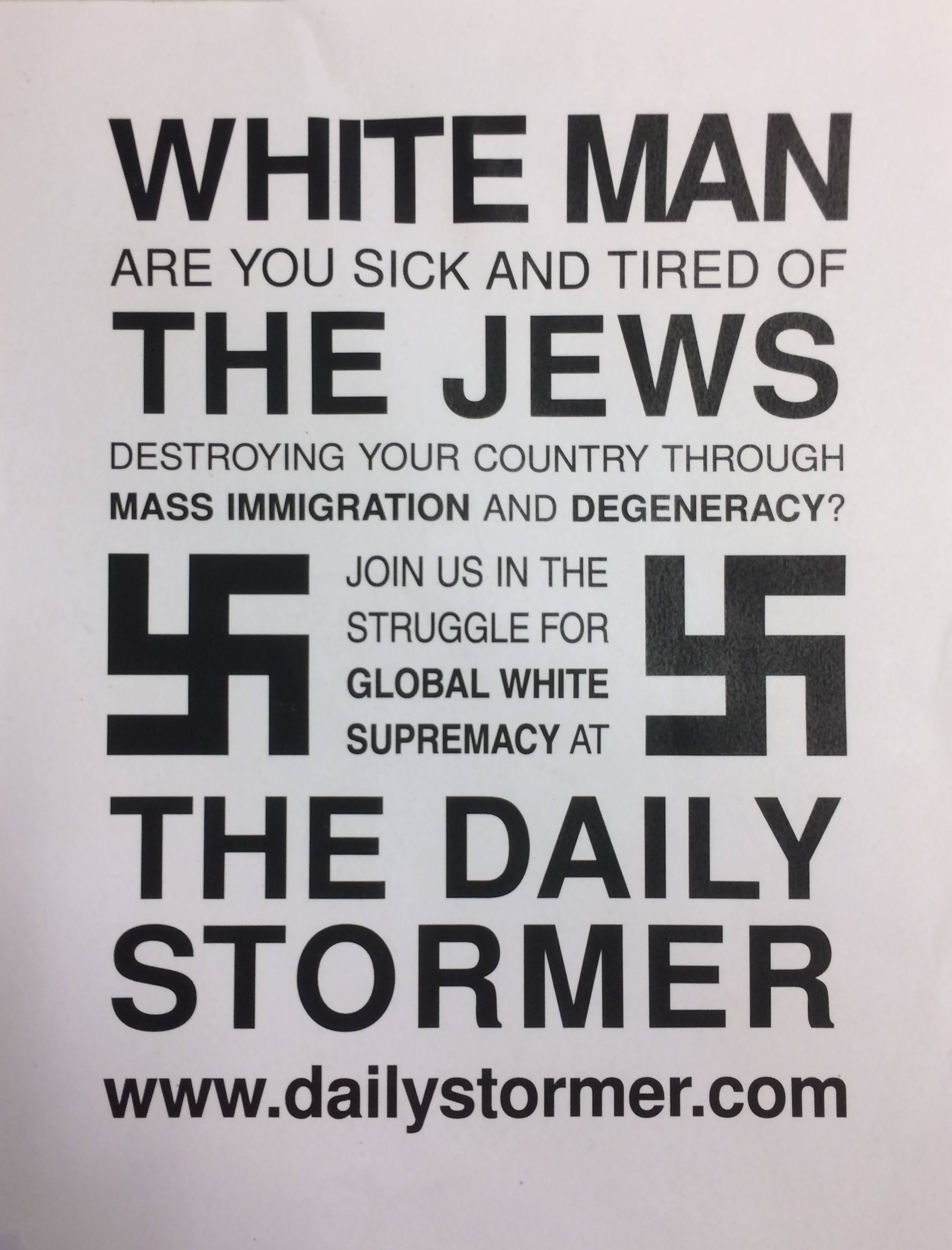 Anti-semitic flyer from the Daily Stormer seen on college campuses.

While the Daily Stormer website was being denied domain registration, other Internet giants were ensuring that they were in no way supporting the white supremacist movement, with companies such as AirBnB blocking bookings for any individuals looking to join the “Unite the Right” rally in the Charlottesville area. Ensuring another blow to the neo-Nazi front, GoFundMe has banned all crowdfunding attempts to support the man who allegedly ploughed his car into a group of innocent protestors on the streets of Charlottesville. Bobby Whithorne, director of strategic communications at GoFundMe, told Reuters that none of the campaigns aimed at supporting Charlottesville terrorist, James Alex Fields Jr. raised any money and were immediately removed.

Facebook has also acted to stem the circulation of the article concerning Heyer that was published in the Daily Stormer, with the 65,000 shares of the article steadily decreasing as the social media website filters its reposts. Facebook has stated that any repost of the article that does not include a caption condemning the article will be deleted, as doing so violates community standards. 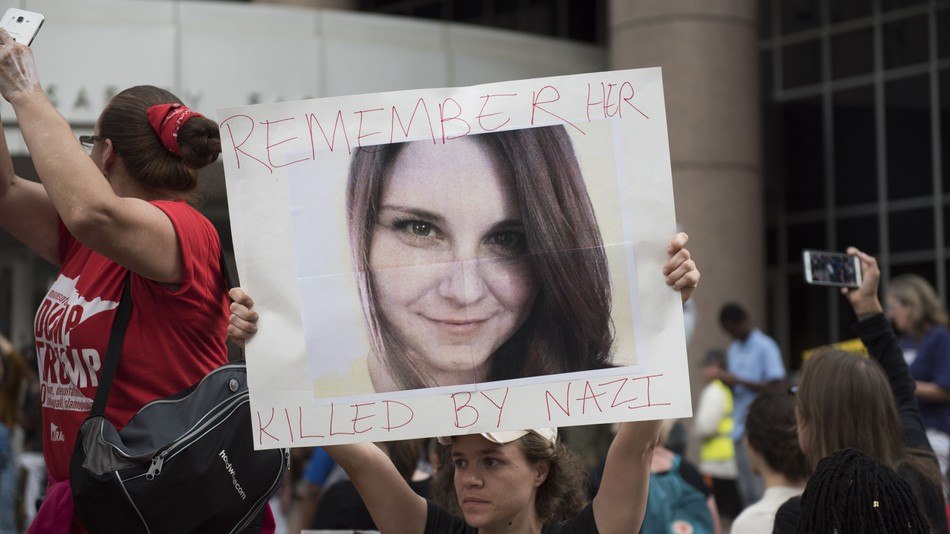 Uber also made their zero-tolerance stance against white supremacism known late last week, with a message to all drivers that the company would act “swiftly and decisively to uphold our Community Guidelines, including our policy against discrimination of any kind”. The company banned the account of notable white supremacist, James Allsup, after a black female Uber driver was made uncomfortable by racial slurs that Allsup and a companion allegedly employed whilst driving past the National Museum of African American History and Culture one week ago. This action represents the ability of corporations not only to curb the communication strategies of the white supremacist movement, but also a direct inconvenience to their ability to organize publicly.

In addition, Spotify has begun to target the cultural expression of neo-Nazi ideologies by removing white supremacist artists from their streaming service. NME notes that Spotify’s decision comes after a Digital Music News published an article titled ‘I Just Found 27 White Supremacist Hate Bands on Spotify’. 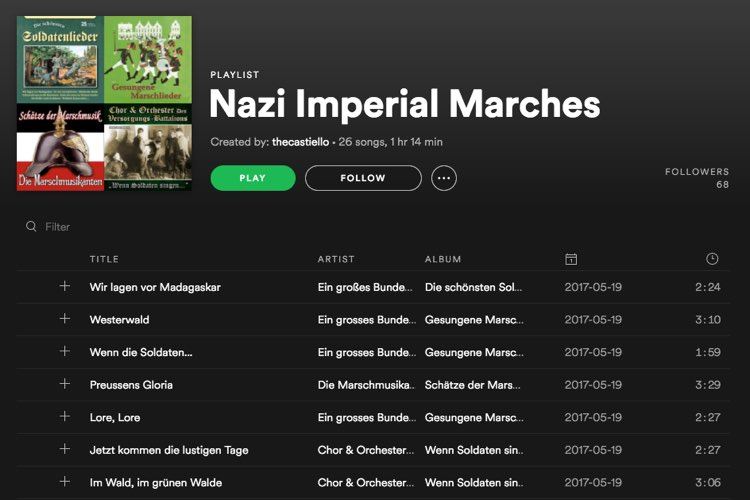 Online opposition against the white supremacist movement is also being conducted readily by social media users, with Twitter pages such as “Yes, You’re Racist” naming and shaming members of the movement in hopes that calling them out publicly will ensure that their actions do not go without consequences. The page describes their work as “scouring the underbelly of Twitter to expose people who say they’re not racist, and then go on to prove otherwise”. One individual, identified by the Twitter page as Cole White, an employee of Berkeley hot dog eatery Top Dog, has lost his job as a result of a photograph showing White as a member of the white supremacist march through the University of Virginia on Friday night. However, this mob justice approach undoubtedly has the potential to go seriously awry, as was seen last week when a University of Arkansas professor was wrongly defamed as having attended the Virginia rally.

The white supremacist faction of the alt-right is a movement that has been growing online steadily in recent years, and the violence in Charlottesville has undoubtedly brought to the fore insidious racism that many believed to simply not exist in modern America. It seems that powerful corporations taking action against the white supremacist online presence could, in fact, be the most effective form of dismantling the movement and stopping the proliferation of hate-speech and violence. With Facebook, AirBnB, Uber, and Spotify now standing by their zero-tolerance policies for racism and speech that aims to incite violence, the white supremacist and neo-Nazi ideologies will certainly find a great degree of difficulty not only retaining their foothold online, but organizing another rally in the same manner that we witnessed in Virginia.