What Will Humans Look Like in 100,000 Years?
Artist Nickolay Lamm teamed up with computational geneticist Dr Alan Kwan to construct a visual answer to the question.
Read More

No one really knows what the future holds, but isn’t it fun to speculate? Nickolay Lamm is an artist and researcher who has made a career out of doing just that. In a recent project, Lamm teamed up with computational geneticist Dr Alan Kwan to construct a visual answer to the question ‘What will humans look like in 100,000 years?’

The two sat down and discussed the factors that may come into play before Lamm created his illustrations. One drawing predicts what we will look like in 20,000 years, one in 60,000 years, and one in 100,000 years.

Kwan based his speculations on the changing climate, technological advancements and his prediction of what living environments might look like in the future. He also considers past trends in evolution. One of the main changes is that we could have larger foreheads to accomodate larger brains. It’s a feature that has already been expanding since the 14th and 16th centuries.

However, Kwan and Lamm note that where in the past, natural circumstances controlled how humans would evolve, moving into the future will be quite different. For example, rapid changes in earth’s climate between 800,000 and 200,000 years ago coincided with the rapid growth of the human skull and brain. Consequently, the human face became flatter.

But nowadays, our mastery of technology and genetic engineering has altered the way we use our minds and bodies, faster than evolution can. Lamm and Kwan predict a future world where zygotic genome engineering technology let us control our own evolution, much like we control electricity. Kwan summarizes:

“The fate of the human face will be increasingly determined by human tastes.”

Take a look at Nikolay’s final predictive illustrations below: 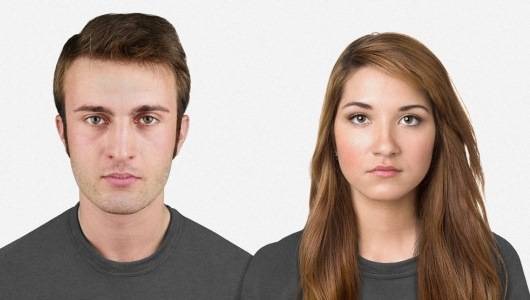 This image illustrates an average male and female face today. 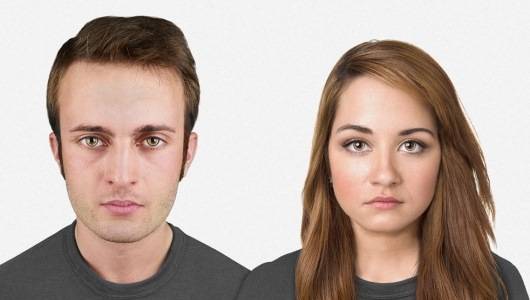 Here, Nikolay’s predictions show some slight changes. Our models’ heads have grown a little to accomodate their growing brains. The light yellow rings you can see in their eyes are special lenses that have developed to act like an inbuilt Google Glass. 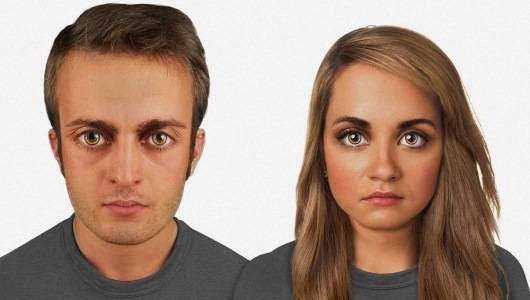 In 60,000 years, Lamm predicts our heads will be larger again. Our eyes will also grow due to human colonization of other planets in the solar system. On planets that are further from the sun, humans will have to adapt to environments with less light.

Because we will be living outside of the earth’s protective ozone layer, skin pigmentation will darken and our eyelids will thicken to offer more protection against UV rays. 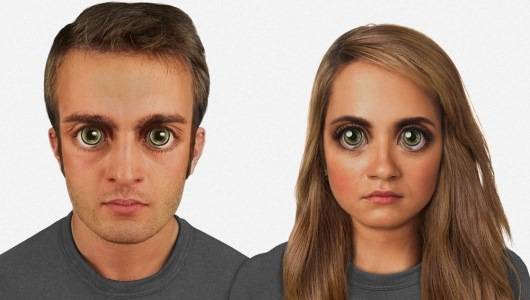 Lamm predicts that in 100,000 years our eyes will be significantly larger with some seriously interesting features. To protect our sight from cosmic rays, he thinks we might develop an “eye-shine to enhance low-light vision and even a sideways blink from a re-constituted place semilunaris.”

We will also have larger nostrils, to make breathing easier in new environments that may not be on earth. Denser hair helps to prevent heat loss from their even larger heads. Our ability to control human biology means that the man and woman of the future will have perfectly symmetrical faces.

Lamm and Kwan explain that this is only ‘one possible timeline’. Lamm says:

“There is a subtle but important distinction between a prediction and a hypothesis. Obviously, nobody can predict what will happen 100,000 years from now, but this is one possibility based on reasoned thought.”

And one that certainly raises some interesting questions.

Go to Lamm’s website to see more of his speculative graphics and illustrations – his work has gone viral many times due to its thought provoking nature.