How Indigenous Wisdom Is Healing Our World

How Indigenous Wisdom Is Healing Our World
Indigenous people build a real bridge between the ancient & modern worlds.
Read More

Dozens of elder chiefs gather atop a mountain. They are surrounded by a curious crowd, people who seek to learn about the ancient ways. The leaves of the pine trees above cast shadows over the faces of beholders. Everyone watches as elder Mayan Tata Pedro inhales mapacho, or sacred ceremonial tobacco. As he puffs a cloud of smoke into the air, his daughter Marina explains that he is purifying the space from any dark shadows that may be lingering from an earlier time. Marina stretches her arms up towards the birds soaring in the clouds and says that oneness with all begins by tuning into divine energy.

“We are here to help you find the part of the divine that lives within you,” she says, “and within everything that surrounds you.”

Marina and her father were among 30 indigenous tribe leaders who were invited to participate in the Aniwa Gathering, which took place earlier this summer from July 13 to 16 in Ibiza, Spain. Aniwa brought together people from all over the globe to create a platform for knowledge sharing and unified prayer. Sacred rituals and workshops motivated guests to live more mindfully, specifically through shamanic healings, consciousness talks, medicine dance, drumming ceremonies, sound healing, art installations, yoga and meditation.

The indigenous representatives that made an appearance came from several tribes, including the Hopi, Ashaninka, Shipibo, Huni Kuin, Yawanawa, Aruaco, Dakota and Maori native communities from America and Oceania. The first annual nonprofit gathering of its kind, Aniwa partnered with the Boa Foundation to raise funds that assisted indigenous communities in building schools and delivering clean drinkable water to their villages.

When learning about this gathering, there are skeptical people who may ask, how can the messages of these tribes remain relevant in first world countries if our culture is so far removed from theirs? Through the inspiring stories of indigenous participants of this gathering, it becomes evident that their truths and concerns, though seemingly different, are quite relatable to our own. 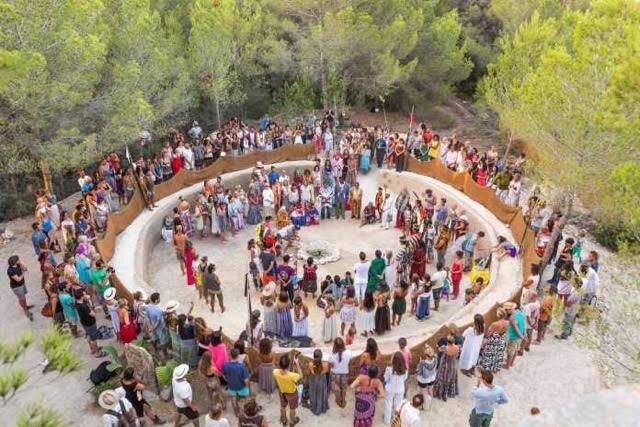 Anthar Kharana, member of the Pan-American Eagle and Condor Nation and founder of the School of Sound and Tribal Healing Arts in Scotland, organizes sound healing retreats both in Colombia and the UK.

As he locks eyes with his audience at Aniwa, Anthar says that inner work is a vital step in empowering community. The Colombian native explains that from a cell comes a tissue; from a tissue, an organ; from an organ, a human; from a human, a family; from a family, a community; from a community, the world and from the world, the universe.

“We are all related,” he says. “From one individual to the next, everything is built up, making it impossible for us to consider ourselves merely irrelevant dots in the universe.”

Anthar’s theory—reinforced by Einstein’s theory of relativity and theory of strings—is that through our collective consciousness, we feel everything and everything feels us both in the physical and spiritual realms. The interconnection of all beings is what makes the universe so glorious, Anthar says, adding that all beings are important and therefore equal. 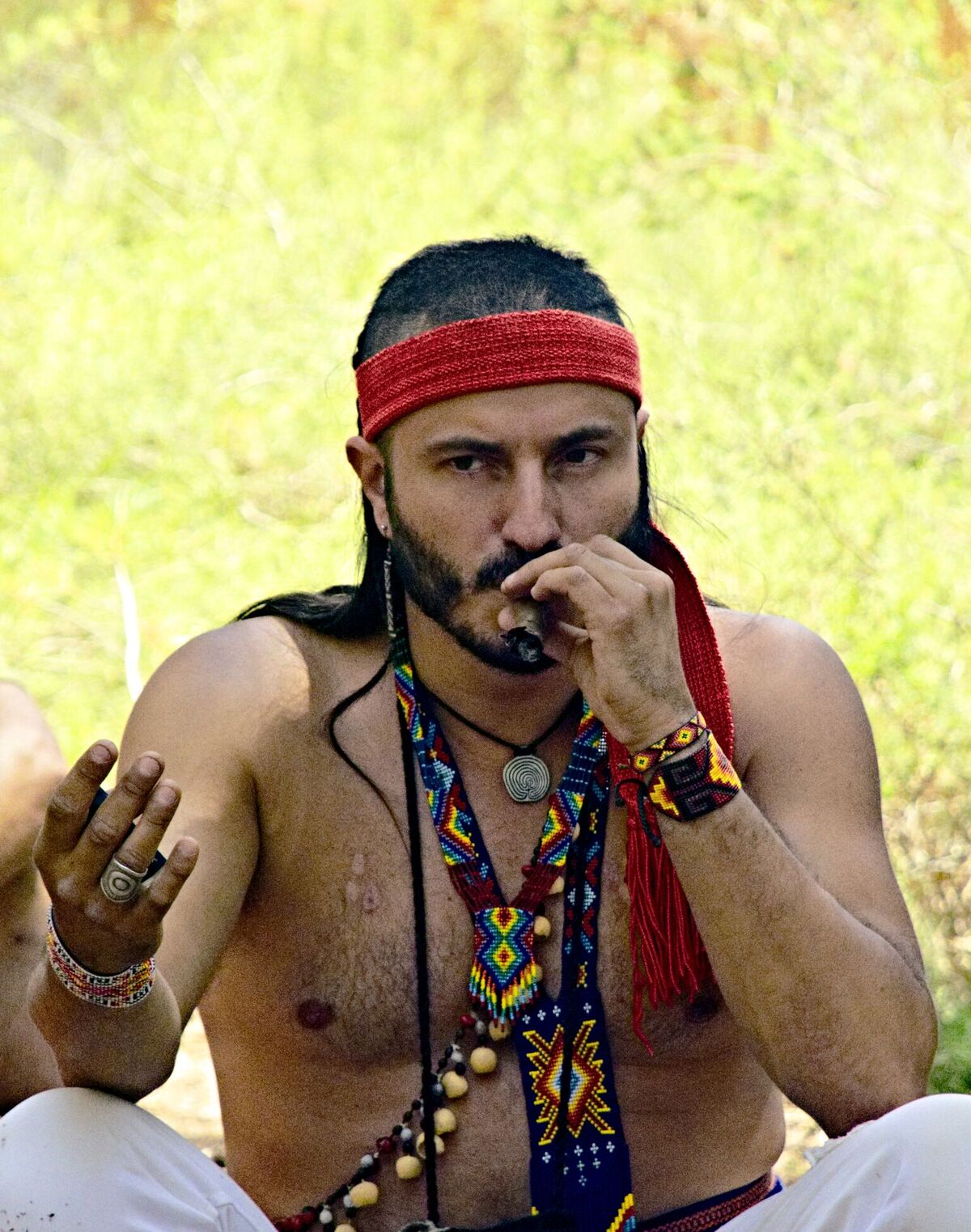 With a warm, benevolent smile, Sergio Torres Lopez from the Nayari tribe says that in his native Mexico, indigenous culture is intertribal, with tribes honoring and sharing each other’s culture. By addressing this point, he is advocating for multiculturalism, a prominent issue in our age.

Moreover, Sergio says that the origins of our existence are tied to the four natural elements: earth, wind, fire and water. His tribe, along with many native tribes across the planet, believe in the importance of praising and respecting the elements. This piece of ancient wisdom is not far removed from basic human essentials. We need earth to live, clean air to breathe, fire to stay warm and water to exist, says Sergio, yet there’s continued resistance against the wide-scale usage of renewable energy systems, mostly due to fear of the unknown.

Life is being sacrificed to short-term thinking. The ultimate consequence of global warming is a drastic reduction of temperatures. With polluted air, contaminated water and a lack of warmth and sun for life to prosper, life on Earth could be conquered by unsustainable practices—which is why natives and environmentalists alike insist that preserving the elements is fundamental to our existence. 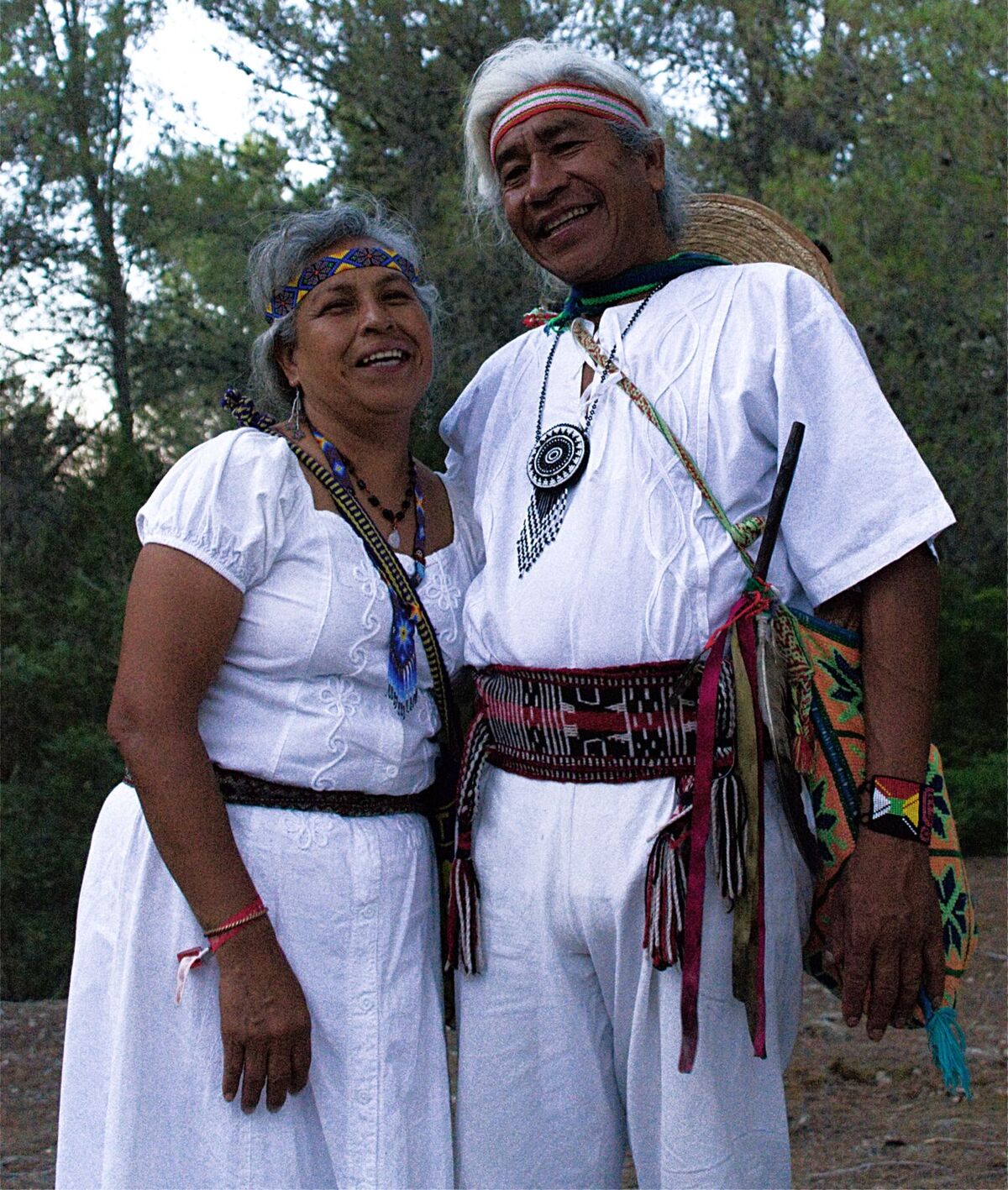 During the gathering, the aforementioned Chief Tata Pedro and Marina offered a healing ritual that’s long been performed by their ancestry: the cacao ceremony. The father-daughter duo carefully brewed the smooth chocolate beverage while explaining that their Mayan heritage—dating back to one of the most advanced ancient civilizations—began celebrating the cacao tree as being sacred long ago.

According to Marina, the Mayans see cacao as a heart opener that helps with fine-tuning emotion, particularly love. In fact, phenylethylamine, found in cacao, has been proven to help with emotional stability. To provide the most nutrients, she says, cacao must be consumed as raw as possible. 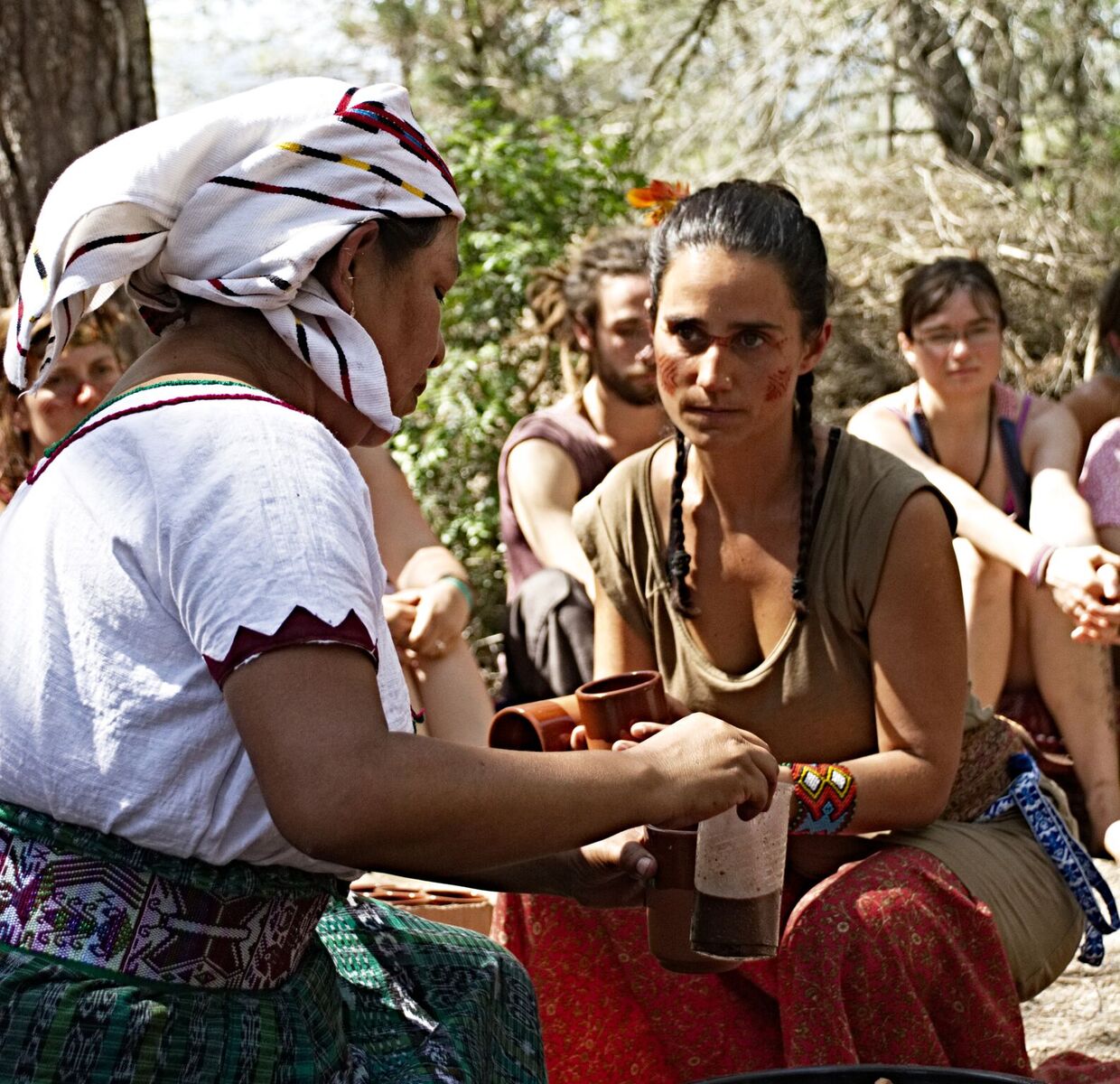 One of the few grandmother elder chiefs at the gathering is Mona Polacca, who comes from the Hopi tribe of Arizona. Polacca means butterfly, a metaphor of transformation. From a young age, Mona has lived up to her name, seeking to create change, which she shares has come over time mostly through political activism.

Greater freedom and recognition for indigenous people was obtained during the 1970s, Mona says, but repression was still strong. So she began helping tribal youths on issues like mental health, alcoholism and substance abuse. She found that reconnecting youths to their native identity positively influenced them in these matters. In time, she found that connecting people in general to native culture—including singing, drumming and sharing circles—was a beneficial form of psychotherapy. Mona created the Turtle Island Project based on these findings.

At Aniwa, Mona humbly reports not to be a healer, but a facilitator. As a United States ambassador, Mona has served on several committees for indigenous peoples at the United Nations. Her life’s work demonstrates that trying to embody and instigate the change we want is the only possibility we have of making the world a better place, for ourselves and those around us.

“There is no hell after death,” she says. “We live hell and glory here. We live these in our lifetime. Whether it becomes hell or glory depends on our actions.” 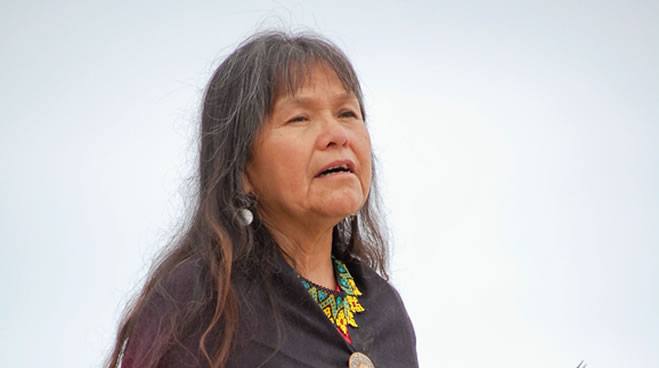 Lili and Laura attended Aniwa as representatives of the Shipibo on behalf of their mother Ynes Sanchez who couldn’t attend the gathering. Both sisters were initiated as healers from a young age. Their community—creators of indigenous art and keepers of plant medicine—are generally tight knit and live far within the jungle.

Their mother Ynes, one the chief shaman elders of the tribe, seeks to promote education in an alternative way. She plans to set up a school of medicine for people who wish to learn about ancient medical practices. Lili and Laura, however, have chosen to build a village outside the community where they welcome orphans, abandoned children and youth who don’t have access to education.

The Shipibo family highlights the importance of finding spiritual purpose, though there’s no right or wrong method of achieving this, says Laura. For the Shipibo, spirituality could be obtained through acts of self love such as retreats and meditation, or selfless acts such as building a home, starting a family and providing a safe haven for others.

Coming all the way from New Zealand, Matua represents the Maori natives. He defines his tribe as “a humble and giving warrior race asking for nothing in return other than equal respect.” Matua seems to fit the description; when he speaks he is fierce, kind and humble. Matua explains that the teaching of the Maoris concerning a soul’s journey is that we continue existing once we die because our soul is infinite. He believes that the purpose of the soul’s journey is to search for authentic identity.

When asked about the most effective way to elevate consciousness, Matua says that mass consciousness is only possible through individual consciousness. In his view, fear is untruth and love is truth. For people to be individually conscious they must operate from love, which Matua believes stems from their quest for self love. For Matua, self love is loving all of you, the best and the worst. He believes it is necessary to love oneself wholesomely to be able to love everyone and everything else in the same manner.

At Aniwa, Matua teaches the attendees the dance of the peace stick. This Maori practice is a form of active meditation. He says that through movements that require repetition and focus, we find an easy and natural way of balancing both the active and passive energies within us. The practice requires balancing one’s own movements as one balances oneself. Self healing takes place as the fluid movements allow us to remember there really is “no separation” between active and passive energy, as they “flow continuously as one.” The movements vary, and Matua says the peace stick helps us remember our souls as we rejoin and balance our fragmented polarities, truly honouring the entirety of ourselves. 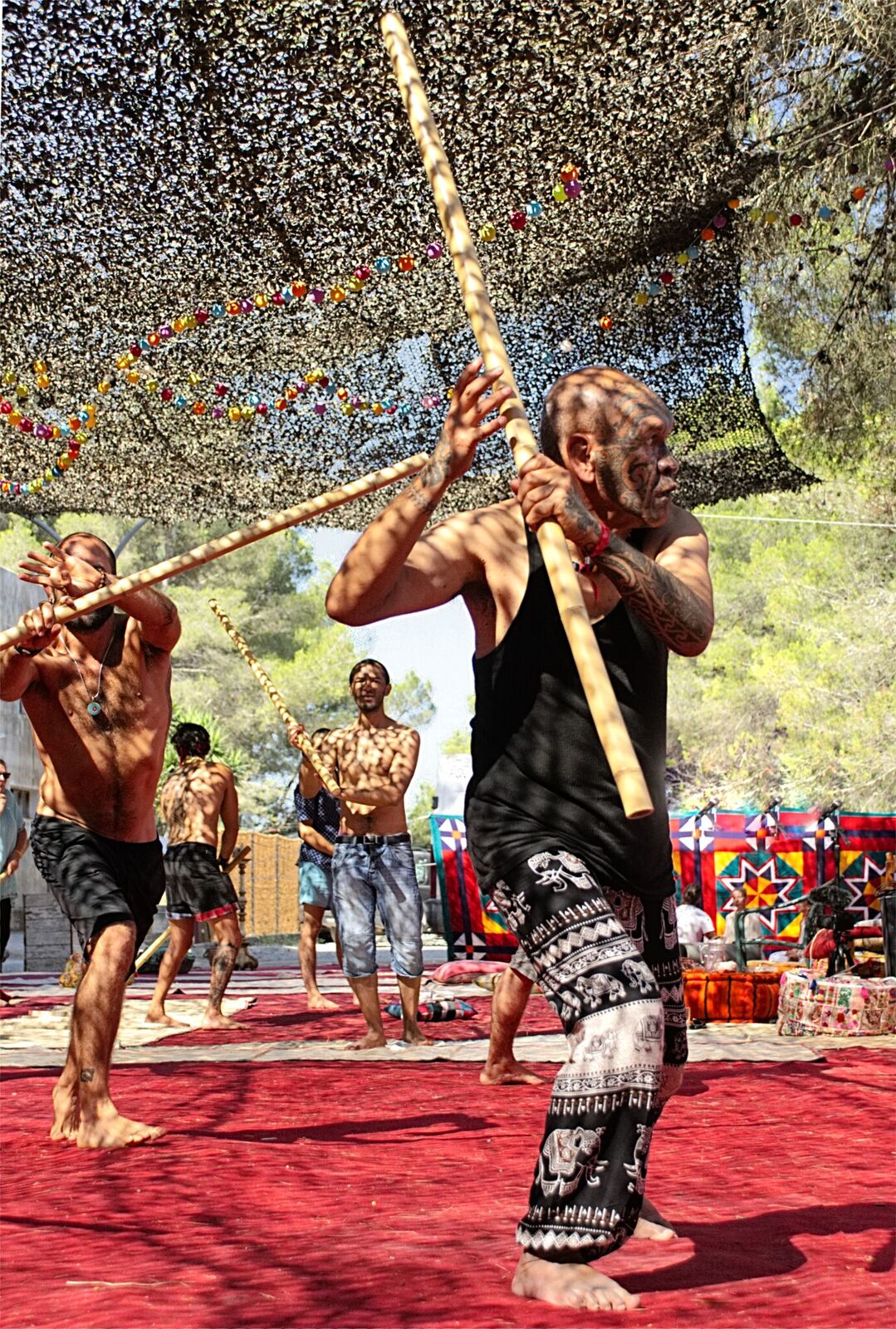 Nessi Gomes, who was born in the Channel Islands to Portuguese immigrants, has found music to be a bridge since her early years. As a songwriter and artist, Nessi is in touch with the darker side of herself. She says that sometimes even in spiritually conscious circles, there is an omniscient self righteousness where negative emotions tend to be suppressed or deemed wrong. Nessi believes there is no need to beat ourselves up over our darker thoughts.

“It is easy to get caught up in spiritual ego,” she says as she rolls a cigarette. “The most important thing to remember is to be kind to others. Kindness is my religion.”

She believes we all have something to offer and she encourages her audience be curious about one another, even the failures, for everyone can learn lessons from them. Nevertheless, accepting, recognizing and honoring negative feelings, she says, is as important as not wallowing in them for long and moving forward. She shared this beautiful message in one of her songs titled “Diamonds and Demons,” sung acoustically during a beautiful quiet evening, closing the powerful event that was the Aniwa Gathering.

There are differences between us all in each of our communities, and many would think that there are even more substantial distinctions between the indigenous and non-indigenous. The truth, however, is that the principles we share and prioritize are not so different, and that, essentially, many of us believe the same basic truths. We seek to protect who and what we love, to make the world a better place and to live our lives in the best way we can. We might find that the native stories and messages shared throughout the gathering resonate with us. Hopefully, these messages can inspire us to merge our own beliefs with theirs. If we are inspired, if we dare to venture a different world, there is no telling what may happen. But one thing is for sure: our minds and hearts will open as we build a bridge between the two worlds.