America’s Lunch Shaming Issue is Disgusting and Easy to Fix. So Why Aren’t we?

America’s Lunch Shaming Issue is Disgusting and Easy to Fix. So Why Aren’t we?
For those who can’t afford school cafeteria, lunch shaming has become all too common.
Read More

20 million kids in America receive free school lunches, but many others struggle to pay the $2.35 fee. For those who can’t pay, “lunch shaming” has become all too common.

Cafeteria staff in some states are instructed to throw away a student’s hot lunch and replace it with a cold cheese sandwich served in a paper bag. Worse, some schools require students to wipe down cafeteria tables in front of their peers to pay off their lunch debt.

“It’s the worst part of the job. Nobody likes it,” says Matt Antignolo, director of food services for Houston’s Lamar Consolidated District.

Cafeteria staff have even resigned over their schools’ harsh lunch shaming policies. “I had to take a little first grade boy’s chicken and give him this ‘cheese sandwich,’” recalls Stacy Koltiska, a former cafeteria worker from Pittsburgh. “I will never forget the look on his face and then his eyes welled up with tears.”

The shaming has gotten so bad that legislators are beginning to fight back. New Mexico recently became the first U.S. state to make it illegal to stigmatize students who cannot afford to pay for their lunch. The bill received strong bipartisan support: it was introduced by Democratic State Senator Michael Padilla and signed into law by Republican Governor Susana Martinez.

“People on both sides of the aisle were genuinely horrified that schools were allowed to throw out children’s food or make them work to pay off debt,” says Jennifer Ramo, executive director of anti-poverty group New Mexico Appleseed. “It sounds like some scene from ‘Little Orphan Annie,’ but it happens every day.”

Padilla understands the issue intimately — he experienced these same shaming tactics growing up in foster care. He would mop the cafeteria floors to pay for his lunch, and became friends with the lunch ladies. “It’s very obvious who the poor kids are in the school,” he says. 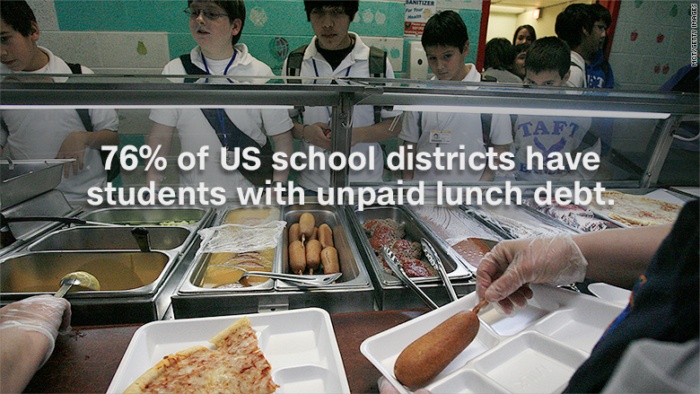 The bill, dubbed The Hunger-Free Students’ Bill of Rights, puts the onus on schools to help parents apply for federal meal assistance programs, and even to fill out applications themselves.

More proactive assistance from schools has already made a huge difference in reducing lunch debt. When Antignolo set up a system to remind parents to sign up for free and reduced-price meal programs, school lunch debt fell from $180,000 to $61,000. Many families qualified for aid, but didn’t realize what programs were out there.

While lunch debt is a serious problem, with some districts racking up debt as high as $4.7 million a year, it’s not a problem that should land on the shoulders of elementary schoolers.

“A 6-year-old maybe up to about an 11- or a 12–year-old, a 14-year-old, they have no power to fix this issue and to resolve this,” says Padilla. “If their parents have debt in the lunchroom, then that is not something that they have control over, and I don’t know why we’re punishing them. So this prohibits that — it outlaws that — and it focuses more on the child’s well-being rather than the debt itself.”