MDMA is Being Developed Into a Prescription Medication

MDMA is Being Developed Into a Prescription Medication
As of right now, MDMA is labelled as a schedule I drug, the same class as heroin, LSD and marijuana.
Read More

Here’s something you may know: MDMA, better known by its street name “ecstasy”, is an illicit drug first synthesized in the early 20th century and recognized by the DEA as a schedule I drug, the same class as heroin, LSD and marijuana. Here’s something you may not know: as of 2017, the FDA has approved phase-three clinical trials of MDMA as a treatment for Post-Traumatic Stress Disorder (PTSD) and the United States could witness the legalization of the drug as medication by 2021.

PTSD is a debilitating mental illness caused by exposure to a traumatic event that threatens the life or safety of the individual or witnesses a traumatic event happening to somebody else. It is defined by a set of symptoms such as severe emotional detachment, involuntarily reliving the traumatic event, panic attacks, severe sleep disturbances, and avoidance of everyday activities that may trigger stress. According to the National Center for PTSD, approximately 7–8% of the population will suffer from PTSD at some point in their lives and for U.S. veterans, this rate can be between 11–30%, depending on the war that they were deployed to.

PTSD is also notoriously difficult to address as a mental illness despite the relative success of specialized treatments such as Eye Movement Desensitization and Reprocessing therapy (EMDR). While it may be unconventional, treatment involving MDMA is reaping astonishing results, particularly amongst patients for whom prior treatment with traditional therapies has failed. 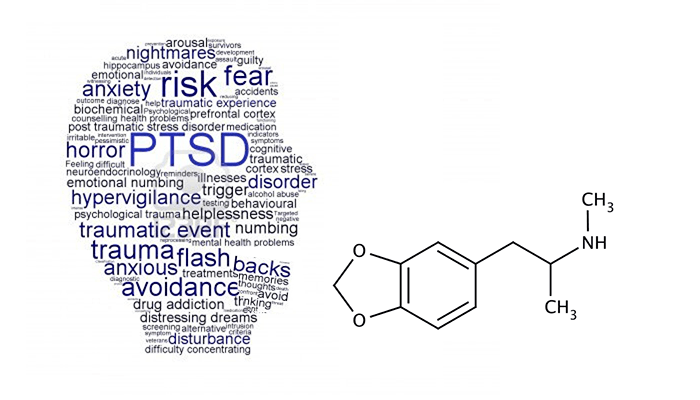 At the forefront of MDMA research for PTSD is the non-profit research company Multidisciplinary Association for the Study of Psychedelics (MAPS). “MDMA affects the part of the brain that’s mostly responsible for fear, the fight or flight response. With people who have PTSD, their amygdala is hyperactive. MDMA directly reduces that; we see it in MRI brain imaging” states Brad Burge, the director of communications from MAPS. The drug is also reputed for releasing stores of serotonin, oxytocin, and prolactin – all promoting feelings of empathy, euphoria, and love; this is clinically useful because they strengthen the patient-therapist relationship and encourage patients to become more emotionally open. The clinicians involved in the MAPS trials have come to refer to MDMA as a “chemical security blanket” for this reason, and while it can equally arouse anxiety in patients by raising heart rates and body temperature, this is not necessarily perceived as detrimental to the therapeutic value.

MDMA is also incredibly useful as an assisting drug in psychotherapy because it is administered only a few times in the course of treatment, rather than taken daily for many years like many other medications for treating mental illness.

When a drug undergoes clinical trials for marketing in the U.S., there are three phases that it has to pass including safe dosage trials, inspections on how it is metabolized in the body and later, efficacy in small trials of patients. As of 2017, MDMA is approved for the third phase of these trials, which are larger and far more rigorous statistical inspections. The phase two trials conducted by MAPS involved 136 patients. Now, they will have to take MDMA to treating 400 patients with PTSD “from all sorts of causes”, says Burge. Separate European trials will also be conducted.

As for when MDMA will become available to the American public, it is possible you will never see the drug hit pharmacy shelves because of the high likelihood of recreational abuse. Assuming that the drug is approved by FDA standards following its phase-three trials, there is still the chance that public perception will negatively sway the decision regarding its availability and it may never be approved. Kenneth Kaitin, director of the Tufts Center for the Study of Drug Development states that experimental psychedelics “have a somewhat higher hurdle because the public’s view of the type of drugs these are”. That being said, MAPS had little issue in being granted study approval back in 2000 when they first proposed their research to the FDA. If and when MDMA is approved for commercial use by the FDA in 2021, its use will be heavily restricted to dosage in psychotherapy and administered only by therapists who have undergone the approved MAPS training program. MDMA will never reach the status of a take-home drug, even with FDA approval, but if legalized as an aid for treatment-resistant PTSD, it could well save the lives and well-being of millions of Americans in years to come.