Meet The Guy Who Wants to Convince You to Drink Coffee made of Elephant Sh*t
Would you pay $60 for elephant poop coffee? One Canadian man thinks you should.
Read More

Blake Dinkin likes his coffee. Not just any coffee, though, he wouldn’t be caught dead sipping on the swill served by Starbucks. No, Blake Dinkin likes his coffee straight from elephant turds. And he’ll pay $60 a cup for it, and wants to convince other people that they should shell out ridiculous amounts of cash for an elephant dung cup of joe, too.

In 2002, Dinkin heard that people were paying $50 for coffee beans that were first digested by an small mammal called a civet. Seeing a potential business opportunity, Dinkin left a cushy job working for a Japanese trading company in Tokyo to start Black Ivory Coffee: the world’s most expensive brand of coffee and ONLY one that sources their beans straight from steaming piles of elephant poop. “There’s easier ways to make money,” he says. “I wouldn’t spend 10 years and put my life savings on this if I didn’t think it’s for real, or I thought it was just going to be an overnight gag,” Dinkin told NPR. 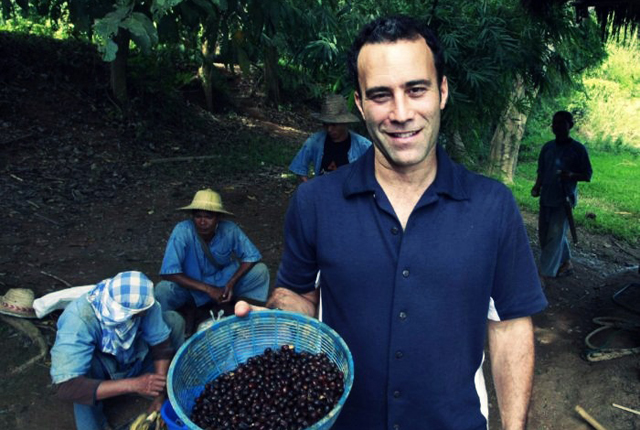 Poop jokes aside, Dinkin believes that the coffee is worth making and selling because unlike civets, elephants are herbivores and their digestive system removes the bean’s bitterness.

“They eat a lot of grass and a lot of green, leafy matter. A herbivore, to break that down, utilizes fermentation to break down that cellulose. Fermentation is great for things like wine or beer or coffee, because it brings out the sugar in the bean, and it helps impart the fruit from the coffee pulp into the bean. I want people to taste the bean, not just the roast. The aroma is floral and chocolate; the taste is chocolate malt with a bit of cherry; there’s no bitterness; and it’s very soft, like tea. So it’s kind of like a cross between coffee and tea.”

Just a wild guess, but a bitter coffee bean is probably the least of people’s concerns when drinking a cup of coffee that was literally a pile of sh*t 24 hours earlier. To ensure that people don’t get poop in their coffee, workers sort through the piles of poop for the coffee beans which are then thoroughly — VERY hopefully — cleaned.

Feeding elephants some fruits and coffee beans and then rinsing the beans isn’t as easy as it sounds. Dinkin’s had his fair share of obstacles taking Black Ivory Coffee from just a crackpot idea to a crazy-but-totally-real company. “I honestly thought it was going to be as simple as giving them some good coffee, out it comes, wash it off, and you could start to drink it,” he said. “I can tell you that first time, it tasted and smelled exactly as you would think; it was disgusting.” There’s also quite a bit of crap Dinkin has to deal with in order to get a bag of coffee; it takes about 33 pounds of coffee beans to make just 1 pound of Black Ivory Coffee.

There was also the task of finding a group of elephants and farmers in Thailand that were willing to help him out. Dinkin surveyed about 35 elephant sanctuaries before he finally found what he was looking for and was able to bring in a full-time vet to help with the rescued elephants — almost all gone through some sort of emotional or physical abuse. Elephants are a prized possession in Thailand among farmers and had to ensure them that the coffee beans wouldn’t be getting their animals hopped up on a caffeine buzz. So far it’s turned out to be a lurcrative gig for both the elephants and the workers. The elephants eat fruits and veggies all day while the workers wait around for them to take a dump and receive a wage of $10 an hour, an amount close to a full day’s pay in parts of Thailand.

So, just what does this elephant poop turned high priced coffee taste like? Well, according to those who’ve tried it, it taste a bit nutty at first, but not at all bitter. Most people probably won’t shell out $60 for it, but that’s okay with Dinkin. “I’m not looking to produce a lot of this,” Dinkin says. “I just want to keep it as a small, niche business. I get to work with people I really enjoy being with, I can make a decent living from it, and everyone’s happy.” 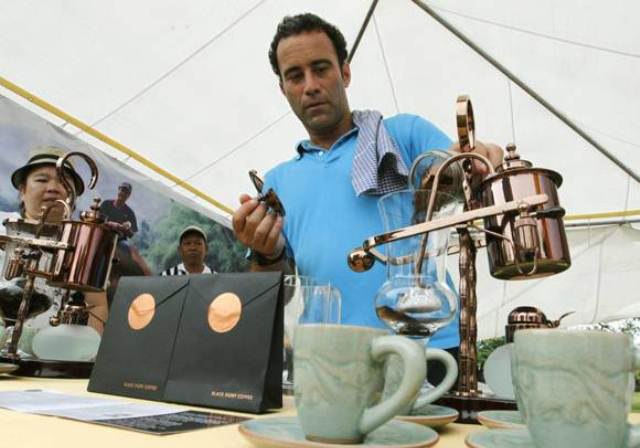