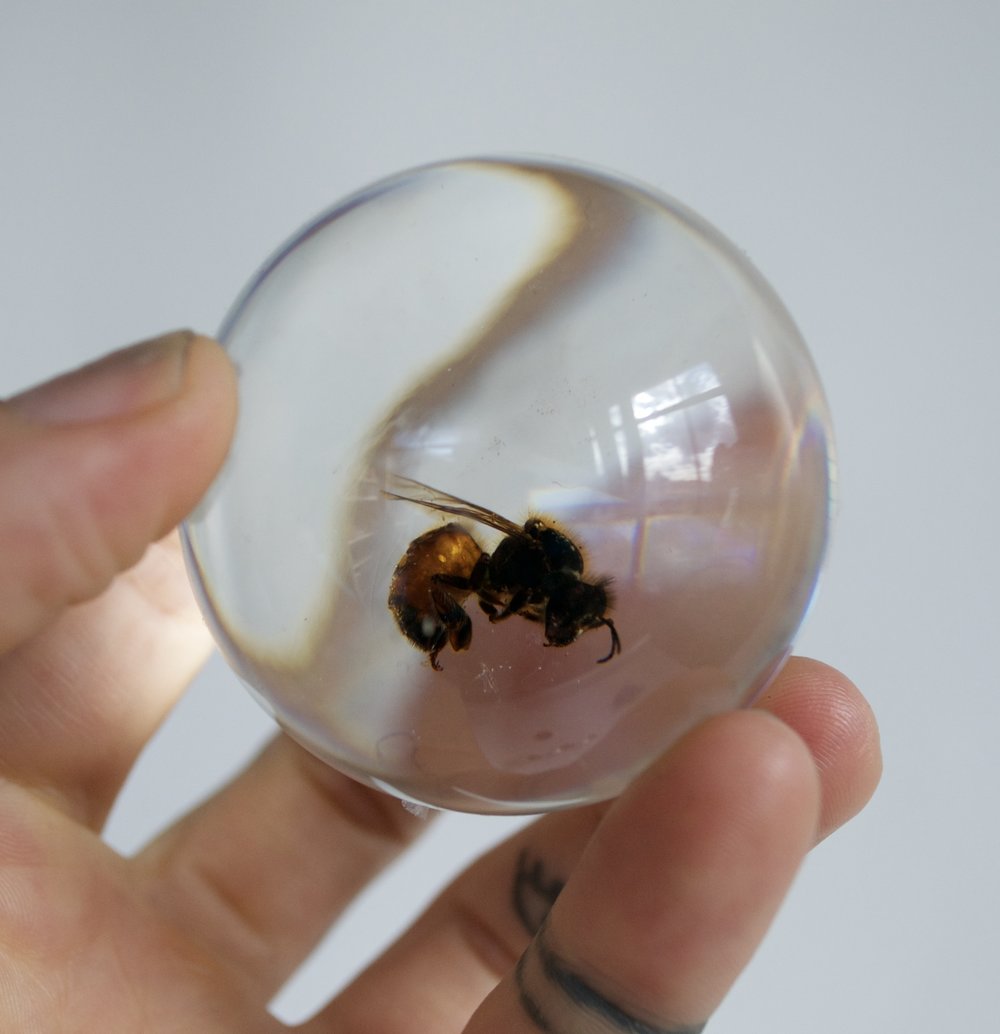 Australian based artist Onejessa has been collecting dead honey bees for 2 years. But what seems like a morbid obsession is, in reality, her preparation for an astounding feat of willpower, environmental activism, and mind-blowing artistry.

“I’m going to build a Cathedral.”

The 28 year old artist wears a full face respirator mask and protective suit as she precisely measures the liquids used to create the glassy orbs. Beside her sits a steel chest, filled with hundreds of precious spheres. Each contains a perfectly preserved honey bee, every veined wing and antenna magnified by its curves.

“Bees have become the poster children of the climate crisis. They’re the most important species on Earth, they hold everything together. Their plight as a species in decline has become iconic of the many environmental tipping points we face.”

Onejessa assembles her bee orbs into mesmerising, suspended installations that play intimately with the changing light and air movement throughout the day. Each resin orb is hung individually. Hundreds of them are suspended together to form floating shapes that at once seem solid, fluid and gaseous.

The process, the artist says, is dangerous, meticulous, and slow. She has been perfecting it for 2 years. But her obsession with bees, and the commitment to delivering her message has only grown over time.

“When an orb comes out perfectly, the beauty and power of these insects is impossible to look past. But imagine a world where we remain distracted from the unfolding ecological crisis until it’s too late, and all we have left are these sparkling reminders of what was?”

Looking at a single orb, you are taken by the beauty of each bee. When you see them en masse, the effect is breathtakingly beautiful, but solemn. Swarms of thousands of dead bees, silently glitter in the light.

Onejessa says that with the global pause caused by the Covid-19 crisis, pulling attention to the fragility of our natural environment is more important than ever before. She believes that artists and media have enormous potential to influence collective consciousness, and that now more than ever, that responsibility must be upheld with devotion.

“We are at a crossroads. Now there is an opportunity for governments to make real structural change towards a greener future, and mitigate the impacts of the climate crisis while the global economy has paused. But Covid-19 also provides a convenient excuse for governments to roll back environmental protection policies and prepare to double down on fossil fuels while the public, media, and most of politics are distracted by the health crisis.

This moment in time could make or break the future of our planet, and our future as a species. It is an opportunity to crystallize our focus on solving the climate crisis in a real way, but it also threatens to derail it. We don’t have time for the second option.

As this goes to print, Onejessa is in the process of building her largest installation yet.

Her bee installations will grow in size, culminating in a final, monstrous form. A floating cathedral, made entirely of the suspended orbs.

“It will be a sacred space where people can enter and sit in silence. A place for reflection, for mourning, for repentance. A place to consider what the world would be like if we worshipped Earth’s systems with the same devotion that we worship abstract idols and gods.

I’m now looking for the perfect site to build it.”