Could Religion Actually Make Children Less Generous?
According to a recent study, kids from religious families are less altruistic than their non-secular peers.
Read More

The idea that religious individuals are more compassionate, giving, and morally sound than the rest of us is one that has been embedded in the minds of American society for a very long time. However, a recent study led by Professor Jean Decety, a neuroscientist from the University of Chicago, suggests that the opposite may actually be true, and that religion and moral behavior don’t necessarily go hand-in-hand.

“Our findings support the notion that the secularization of moral discourse does not reduce human kindness. In fact it does just the opposite,” says Decety.

While previous research has examined generosity in adults, Decety’s study is the first to take a large-scale look at how religion and moral behavior intersect in children from around the world, focusing specifically on altruism, or the willingness to give someone else a benefit that also comes with a personal cost. 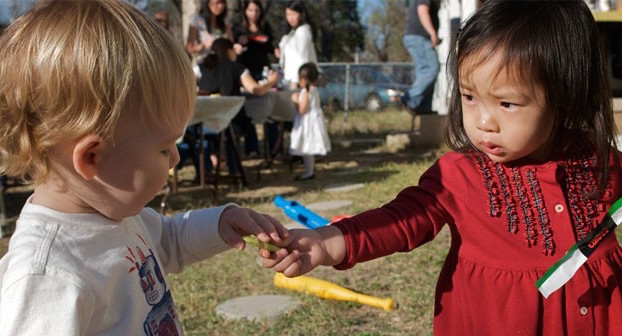 The Study
Researchers looked at 1,170 children, aged 5-12 years old, from the US, Canada, China, Jordan, Turkey, and South Africa. The majority of the children were from households that identified as Christian (24%), Muslim (43%), or not religious (28%).

The kids were individually paired with an adult who let them choose their 10 favorites from a selection of stickers. They were then informed that the adults didn’t have time to distribute the rest of the stickers to other kids in a fictitious class, who were described as being from the same school and ethnic group, but that each child could put some of his or hers in an envelope to be shared with them. The researchers then used the number of stickers put in the envelope as a measure of the kid’s altruism.

Another part of the study assessed the children’s views on justice by showing them videos of individuals being pushed or bumped and asking them for a rating of “meanness,” as well as the level of punishment they thought the perpetrator deserved.

Compared to the other two groups, Muslims saw these mildly harmful actions as more mean, and believed a harsher punishment was warranted. Christians judged the harm to be more severe than secular kids, though their punitive ratings were the same.

Overall, religious children were less tolerant of harmful actions and favored harsher penalties. These findings are consistent with fundamentalism, when actions are either right or wrong, with no gradient in morality between the two extremes.

Potential Explanations
Decety says the pattern of religious children being less generous may be tied to a phenomenon called “moral licensing,” or when a person feels permitted to do something wrong because they see themselves as morally correct, even if only subconsciously.

Benjamin Beit-Hallahmi, a psychologist at the University of Haifa in Israel and an expert in the psychology of religion, suspects the results are connected to the importance many religions place on external authority and threats of divine punishment. Whereas children in religious households learn to act out of obedience to a watchful higher power, children raised in secular homes may be taught to follow moral rules just because it’s the right thing to do. “Then, when no one is watching,” Beit-Hallahmi says, “the kids from nonreligious families behave better.”

Decety has expanded his research to examine the effects of religion on children’s behavior in 14 countries, and is also studying whether religion influences how children decide to distribute goods among different people in a group. “My guess is that I will find the same result as I did in this study,” he says.