This Secret Space Plane Was in Orbit For Two Years. Nobody Knows Why.

This Secret Space Plane Was in Orbit For Two Years. Nobody Knows Why.
Its launch didn't get a lot of press, fueling a number of theories on what it was doing exactly.
Read More

On May 20th 2015, a secret military space plane was launched from Cape Canaveral, Florida. Known as X-37B, the space plane was on its fourth mission and after orbiting the Earth for nearly two years, it returned home this week with a sonic whoosh marking its arrival. What it was exactly doing up there in space is a big mystery, and likely one that the U.S. Air Force will be keeping hush, hush for some time.

“Today marks an incredibly exciting day for the 45th Space Wing as we continue to break barriers,” Brigadier General Wayne Monteith, who commands the space wing, said about its return in a statement.

Designed by Boeing and launched into orbit 718 days ago by a United Launch Alliance Atlas V rocket, the spacecraft looks similar to NASA’s space shuttle but is much smaller. With a wingspan of not even 15 feet and a weight of around 11,000 pounds, it’s been labeled as being the Air Force’s “newest and most advanced” re-entry spacecraft. 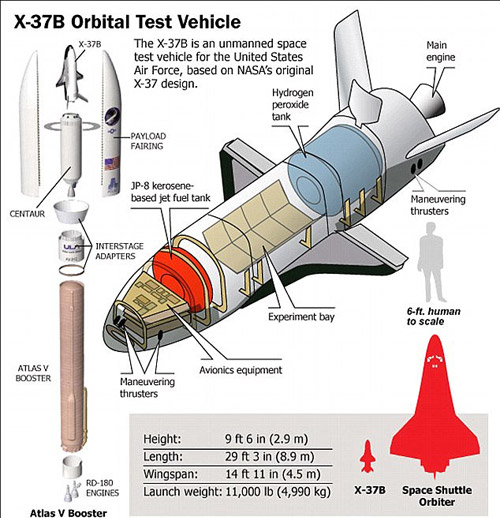 The space plane completed its third mission on October 17th 2014, after 674 days in orbit. What’s particularly interesting is that it was originally designed for much shorter trips. Air Force spokesperson Captain Chris Hoyler told Space.com that it was designed for an orbit of just 270 days. “Longer missions have been demonstrated,” said Hoyler. “As with previous missions, the actual duration will depend on test objectives, on-orbit vehicle performance, and conditions at the landing facility.”

The X-37B’s most recent mission marks a new endurance record for the spacecraft and its first time landing back in Florida.

While the details of the space plane’s mission have not been revealed Hoyer said they were testing “an experimental propulsion system,” but remained mum on the specifics. Space Flight Now suggests the electric propulsion system would have an advantage because its xenon fuel weighs much less than traditional hydrazine. The technology could further the accuracy in the development of technologies to control satellites, as well as reusable spacecraft technologies to support “America’s future in space,” according to the Air Force.

Not surprisingly, a number of theories developed about what else the X-37B could have been doing while in orbit.

Prior to its launch, Spaceflight Magazine published reports suggesting that because of its close orbit to the Tiangon-1 Chinese space station, it might have been on a spy mission. Brian Weeden, a consultant with the Secure World Foundation and former Air Force officer who worked at U.S. Strategic Command’s Joint Space Operations Center shot the idea down, citing that the physics didn’t allow it because of right ascension. Because X37B and Tiangon-1 are in orbits which cross the equator roughly 90 degrees apart, their paths crisscross at thousands of meters per second. Not exactly much time for spying.

This theory certainly might be the most exciting and action packed, but it’s also the least likely according to Popular Mechanics. “Changing a spacecraft’s orbital plane requires a great amount of thrust—so using something like the X-37B as a bomber would mean changing its orbit to fly over targets, and that would eat up its limited fuel supply”, according to University of Maryland professor Mark Lewis, who once served as the Air Force’s chief scientist. Getting a bomber to the proper location on time is sort of essential.

Interfering with other satellites

There are undoubtedly satellites launched by other nations in orbit that make the United States government a little nervous. And the possibility that the plane could be on a mission to disrupt them has all the excitement of a James Bond plot. The only problem is it would be difficult for the plane to carry out these missions from a far off distance, thus making it rather easy to trace the activity back to the U.S.

So until the Air Force decides everything is neatly wrapped up and there’s no threat of valuable data gathered by the plane falling into the wrong hands, a vague government press release will have to do. In other words, it could be several decades – if ever – before we find out much more about the mysterious missions of the X-37B.