This Petition is Putting Pressure on Supermarkets to Stop Abusing Plastic

This Petition is Putting Pressure on Supermarkets to Stop Abusing Plastic
Supermarkets won't stop abusing plastic unless we force them to. Sign here to make yourself heard 👇
Read More

Plastic has been making big news in 2018. Earlier this year, National Geographic published an issue titled Planet or Plastic?, which drew attention to the massive amount of plastic waste in our oceans and around the world through a stunning series of photos and articles. In early July, Starbucks made headlines when it announced it would stop using plastic straws by 2020, and introduced designs for new lids that would eliminate the need for single use straws. Also this summer, San Francisco joined several other cities in California when it passed legislation commonly referred to as a ‘straw law’, which make the use and distribution of plastic straws, plastic silverware, and other nonsustainable items like styrofoam takeout containers in restaurants, hotels, and other businesses punishable by a fine of up to $1,000 or even jail time.

Combined with a multitude of anti-plastic innovations to create eco-friendly packaging and live waste free, the fact remains that plastic – and efforts to reduce its effect on our environment – is a hot topic right now. One area where plastic still reigns rampant is in our supermarkets. Despite the efforts of many to use reusable canvas shopping bags or mesh produce bags, grocery stores still create an unbelievable amount of plastic waste through the use of plastic packaging on everything from bagged bread and shrink-wrapped cheese to styrofoam trays for cuts of meat and plastic containers of vegetables. Many people try to reuse plastic containers or at least recycle them, but studies have shown that only about 9% of the world’s plastic is ever recycled, and 40% of plastic worldwide is used only once before being discarded. There are already more than five trillion pieces of plastic in our oceans, with the equivalent of a literal truckload more dumped in every single minute.

There are plenty of actions that we as individuals can take to try and reduce the impact that the plastic epidemic is taking on the world. But with the prominence of initiatives like reusable shopping bags and reducing carbon footprints among the general public, why aren’t supermarkets and food production companies stepping up to the plate and doing their part to reduce plastic packaging?

The simple answer? It’s because they don’t have to, and right now, we’re not forcing them. 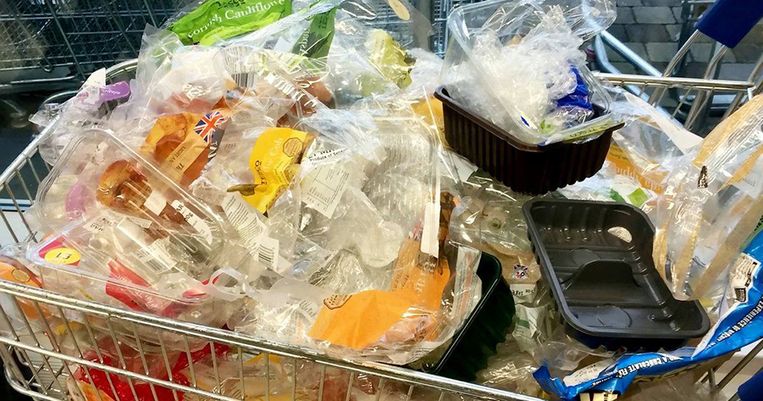 Putting on the Pressure

Plastic is cheap, easy, and versatile when used for packaging, and grocery stores around the world continue to use it because it requires much less effort and cost than coming up with a new solution to the world’s plastic epidemic. But not everyone is taking this lying down.

In the UK, activists have taken a stand by organizing ‘plastic attacks’ on local supermarkets. Customers taking part in these protests complete their weekly shopping as usual, but before leaving the store, they unwrap all the plastic packaging from their groceries and leave it at the register or in a shopping cart for the supermarket to deal with. This action not only brings attention of waste to other shoppers, but also to the supermarkets themselves, and presents an undeniable front of dissatisfaction on the part of consumers. In the face of such a clear display, protesters hope that supermarkets will begin to realize that their customers want change.

Since the first plastic attacks, over one hundred more have been staged not just in the UK, but all over Europe and across the world in places like South Korea, Peru, and the United States. While no supermarkets have yet taken action directly due to these events, plastic attacks are gaining in recognition and popularity, and like many other grassroots protest campaigns, it might just be the kick that many grocery stores need to understand that investing in sustainable packaging could be profitable and marketable for their businesses.

As long as we continue to support the plastic industry by buying products that are packaged with plastic, supermarkets won’t stop using it. As consumers, one of our most powerful weapons when trying to send a message to businesses is through the use of our money. Choosing not to buy products that are wrapped in plastic, or taking your business elsewhere if this is not an option, can be incredibly effective if enough people get on board. Likewise, politely voicing your reasons to employees, customer feedback surveys, or other appropriate venues will let supermarkets know that you’re looking for change.

One of the most compelling actions we can take is to use our voices to stand behind what’s right. By taking action on an individual level, we can spread the word and let corporations know that we won’t stand for more waste. When we use this ‘squeaky wheel’ method (and back it up by showing companies how we spend – and don’t spend – our money), we can create change through our movement. If you’d like to help do your part in reducing the use of plastic on supermarkets, you can start here by adding your name to this Greenpeace petition. You can also search out new shopping centers in your area to see if there are any zero-waste stores or places that offer a plastic-free aisle, like this grocery store in the Netherlands which introduced the concept earlier this year. For produce, consider joining a local co-op or shopping at a farmer’s market to get food that is fresh, local, and usually free from plastic packaging.

Unfortunately, living plastic-free is not an attainable goal for many people due to cost and current packaging practices. But in the meantime, it is possible to try and reduce the amount of plastic used in your own groceries. You can buy loose produce rather than items packaged or pre-bagged together, or stage your own plastic attack by unwrapping unnecessary plastic after paying for your groceries and asking the cashier to recycle it for you.