10 Ways to Slowly But Surely Shrink our Obsession With Plastic

10 Ways to Slowly But Surely Shrink our Obsession With Plastic
Finally the industry is innovating out of this environmental disaster.
Read More

Plastic over the years has slowly been killing animals and ecosystems, and destroying much of the beauty of our planet. A recent study estimated that almost 12 million metric tons of plastic enter the ocean every year. The statistics on plastic bags alone are astonishing. Worldwide, 1 million bags are used every minute. A plastic bag has an average ‘life’ of 15 minutes before it becomes waste, and can take up to 1,000 years to decompose.

Thankfully, there are innovative and forward-thinking organizations and individuals in the world who are joining the anti-plastic movement. Below are ten ways our world is slowly but surely shrinking our obsession with the material.

1. A lot of alternatives to plastic are getting created. 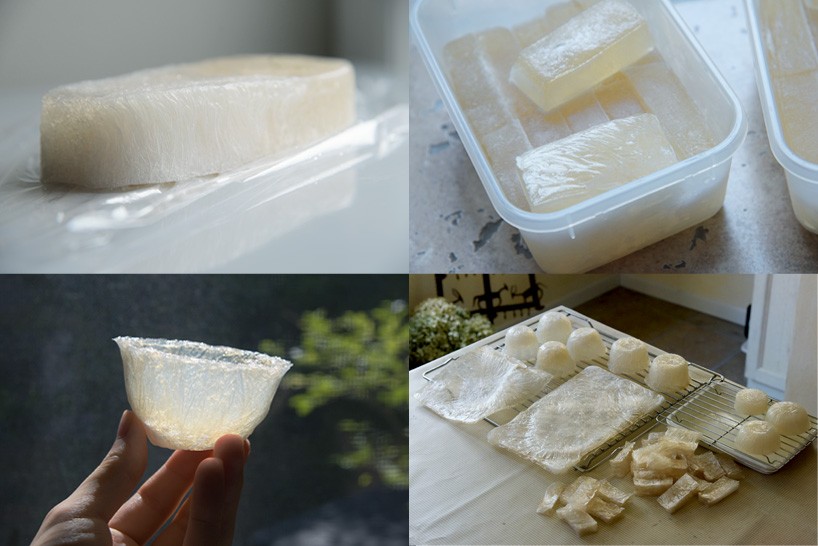 In the early 1940s, Henry Ford experimented with a formula of soybeans and possibly wheat, hemp, and flax to create plastic-like parts for his “Soybean Car,” a model debuted at the Dearborn Days festival in 1941. Today, companies like Agar Plasticity are using Ford’s innovative idea to similarly create alternatives for plastic food-storage boxes, shopping bags, cups and hotel amenities out of naturally-occurring materials, such as agar – a gelatinous substance found in the Japanese red algae plant.

2. With the invention of edible cutlery, you can now use your spoon and eat it too. 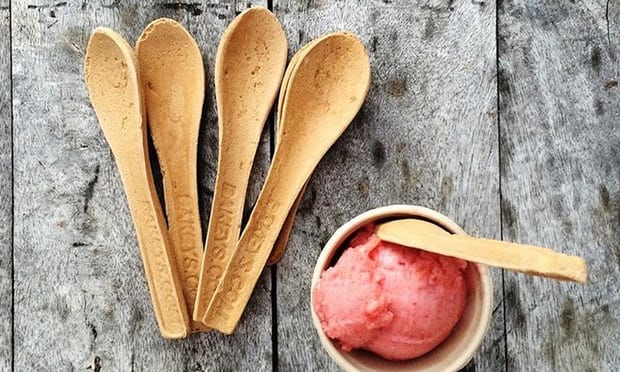 Think of all those take-out meals you eat, each one including a perfectly wrapped package of napkin, salt, pepper, and plastic cutlery. Now times that package by 40 billion and you’ll have the number of plastic utensils that are used in the U.S. alone each year. To combat this excessive number, the founder of Indian cutlery company Bakeys created a vegan friendly spoon that you can eat as an amuse-bouche when finished with your meal.

The single-use spoons are made from rice, wheat, and sorghum (an ancient grain originally from Africa), and comes in three flavors – savory (salt and cumin), sweet (sugar) and plain. “It tastes like a cracker, a dry cracker because we don’t put any fat in it. It can complement any food. The taste of the food gets into the spoon,” says Bakeys founder Narayana Peesapaty. Even if you don’t want to eat it after your meal, the spoon can be thrown away and either eaten by other animals or disintegrated naturally within three days.

Peesapaty’s future plans are to make Edible Cutlery available worldwide, continue to draw awareness to this creative and nutritious alternative to plastic, and provide a direct market for farmers who grow essential grains, such as millet and sorghum.

3. Eco-packaging companies are making food packaging out of… food. 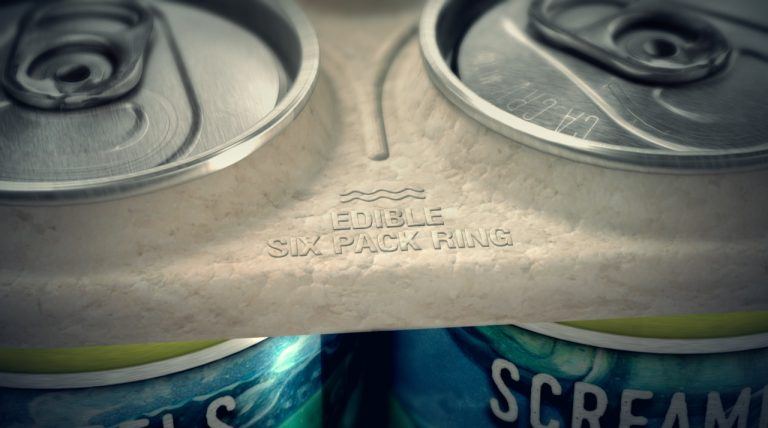 Food and beverage companies are slowly jumping on board with the idea that we need a solution to all that wasteful packaging that comes along with our food. One idea that has taken the world by storm is to use excess food to make the packaging. Entrepreneurs and researchers are working together to turn mushrooms, milk, and bread dough into edible replacements for plastic and other containers. For example, Florida-based Saltwater Brewery has developed a hardened edible mold out barley and wheat to hold six-pack beer cases, in order to lessen the amount of plastic rings consumed by marine life. Similarly, New Yorker company Ecovative has grown a bioplastic out of the mycelium fungus that forms the roots of mushrooms as they grow in piles of dead leaves or compost. The bioplastic can then be molded into any shape and used to contain any product, including the bottles of maple syrup produced at Vermont’s Merck Forest and Farmland Center. 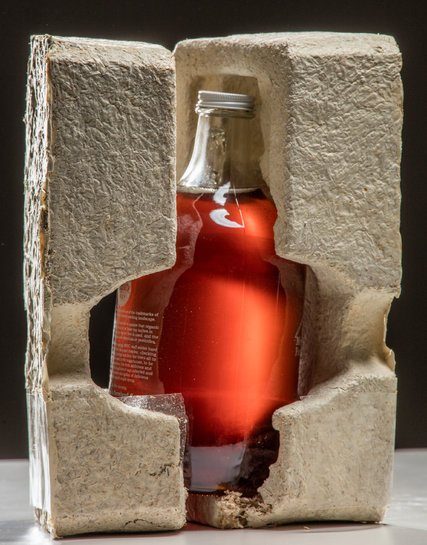 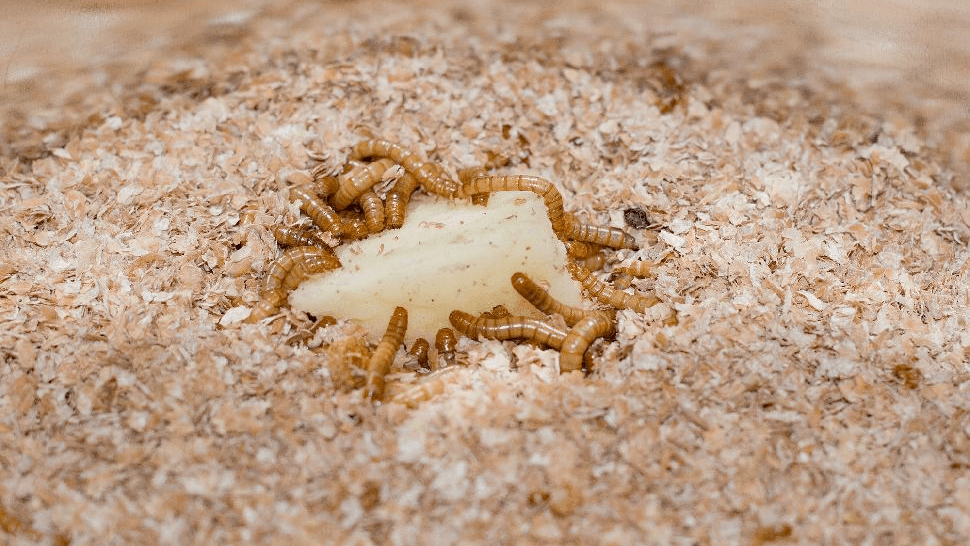 Recently, engineers at Stanford, with the help of researchers in at Beijing University in China, have found a tiny, slimy solution that may be the new hero on the war against plastic: mealworms.

For years, mealworms have been used as a dietary protein supplement and for pet food. But recent studies have found that the larvae of the darkling beetle can healthily survive on a diet of polystyrene and Styrofoam. These wriggly creatures have microorganisms in their digestive tracts that break down plastic without disturbing the worms at all. For the study, 100 mealworms consumed about 35 milliliters of plastic a day – roughly the size of a small pill. Within 24 hours, 48% of the plastic was converted to carbon dioxide and the remaining became small biodegradable droppings that appear to be safe for soil. Researchers hope that if they can understand the biological systems inside the worm’s gut, engineers may find a way in the future to artificially create a new way to break down plastic or, conversely, find ways to create plastic that will biodegrade.

5. Renewable wood pulp is the “wonder material” for eco-friendly electronics and car parts. 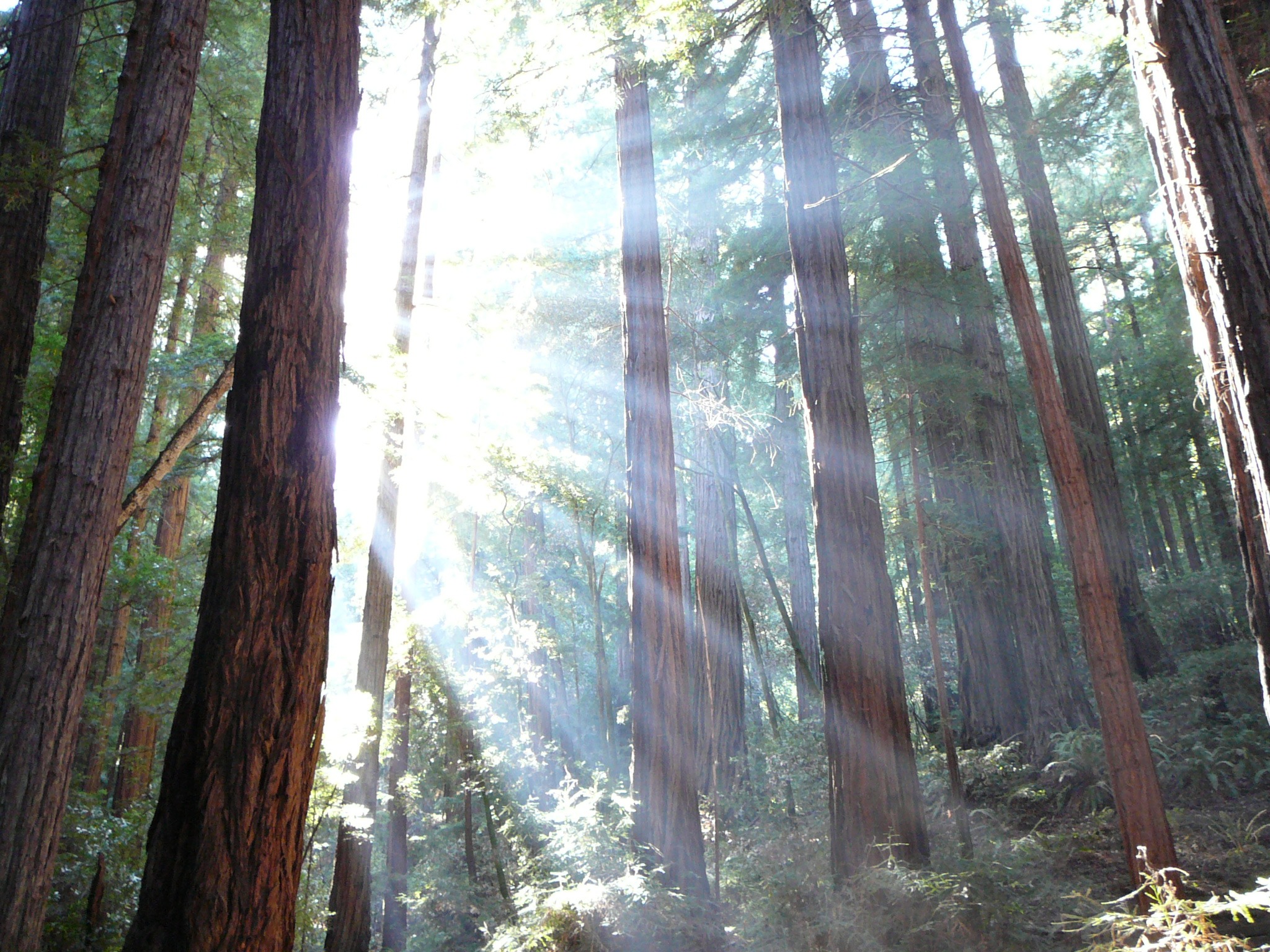 “We are turning waste into gold,” says Jeff Youngblood of Purdue University’s NanoForest Institute. This “waste” is scientifically called nanocrystalline cellulose (NCC) and is produced by processing a pulp out of any kind of wood, including twigs, branches, and sawdust. Not only is NCC transparent, it is made from a tightly packed array of needle-like crystals which have “a strength-to-weight ratio that is eight times better than stainless steel.” And it’s extremely cheap!

NCC is a globally cherished resource. Japan-based Pioneer Electronics is applying NCC to their next generation of flexible electronic products. IBM is using the processed wood to create certain computer parts. The US army is even getting in on the “wonder material”, using it to make lightweight body armor and ballistic glass.

According to Phil Jones, director of new ventures and disruptive technologies at the French mineral processing company IMERYS, “NCC will replace metal and plastic car parts and make nonorganic plastics obsolete in the not-too-distant future.”

6. Cities across the globe are banning the use of plastic bags. 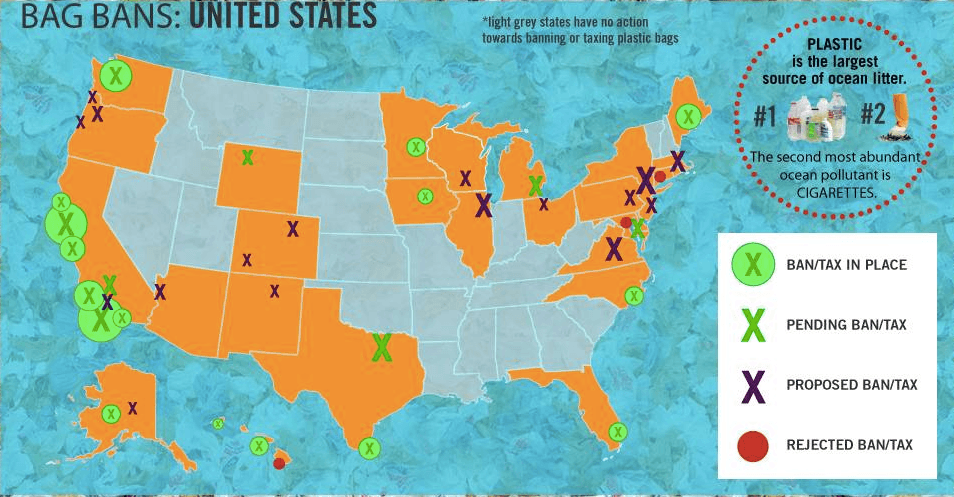 In 1993, Denmark was the first country to impose a tax on the use of plastic bags. In the years following, the usage dropped quickly by 60%. The EU will require an 80% reduction of plastic bags by 2019. 16 countries in Africa have bans on plastic bags, including Rwanda, Kenya, and Botswana. In largely agricultural countries such as the Philippines, Mauritania, Bangladesh, bans have been put in place in order to protect sewage systems and cattle herds. According to reusethisbag.com, the U.S. currently enforces 133 different anti-bag regulations, city and county wide, with more pending bans/taxes to come in 2018. The idea driving the ban on plastic bags and taxes on the usage of them is to lower the amount of plastic which finds its way into the oceans. A simple switch from plastic to a reusable canvas bag could help hundreds of thousands of marine life from choking on fatal plastic pieces.

The country of France has gone so far as to ban all single-use cups, plates, and other dishware. The new law, which passed in Fall 2016, gives producers until 2020 to guarantee that all disposable dishes sold in France are made of 50% biologically-sourced materials and can be composted at home.

7.  The “Strawless in Seattle” movement is just one of many protests against plastic straws. 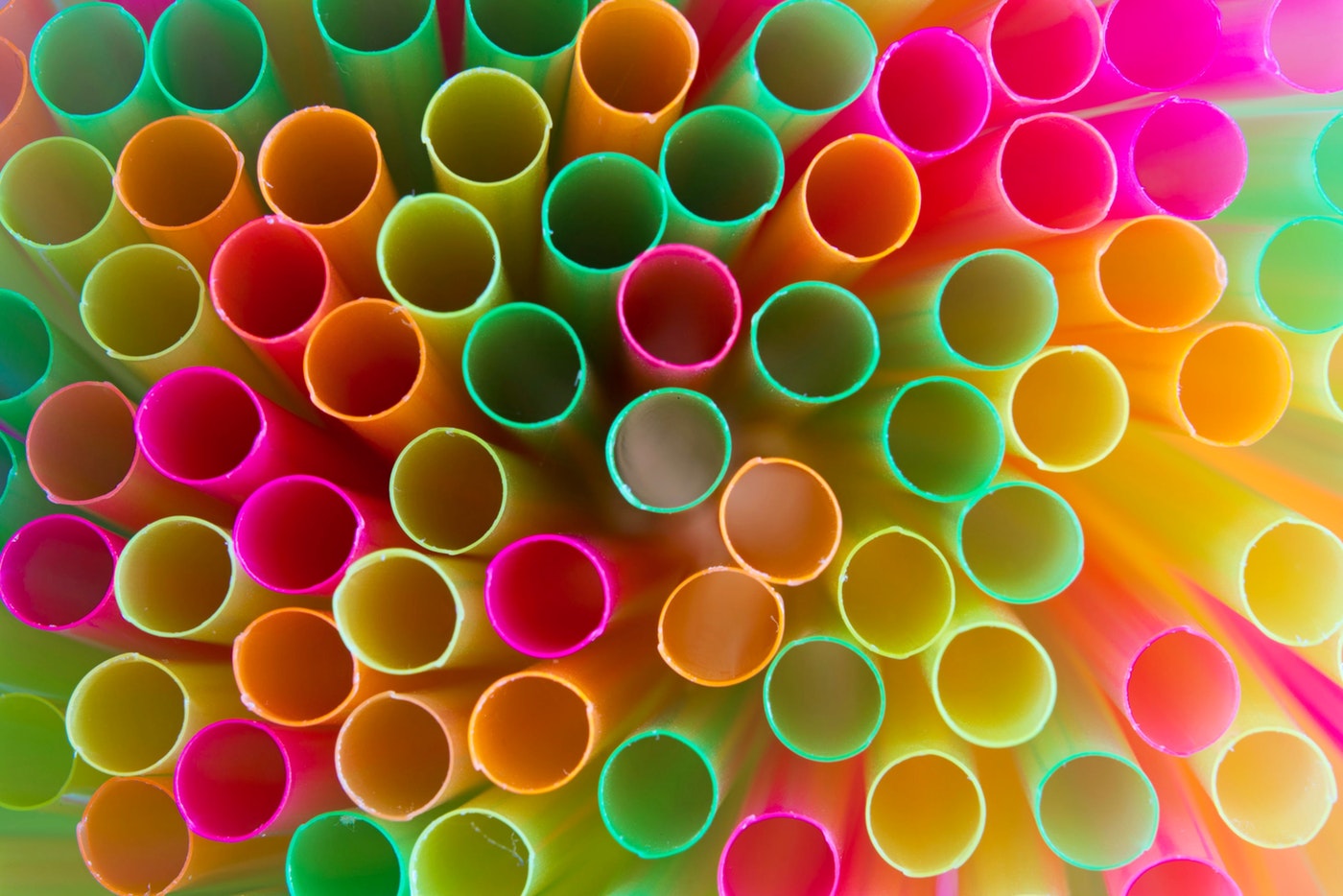 After seeing a horrific video of a turtle getting a bloodily lodged straw removed from its nose, actor and environmentalist Adrian Grenier proposed that to fight ocean plastic pollution, “we have to start with something simple, accessible and inspirational to get as many people on board as possible. Instead of asking people to change their entire life, start with something small, such as stop using single-use plastic straws.” As part of the monthlong “Strawless in Seattle” campaign in September 2017, 2.3 million plastic straws were permanently removed from the Emerald City. And that’s not all—beginning on July 1, 2018, Seattle will ban all disposable straws and cutlery from 3,000 establishments including restaurants and sports stadiums. Grenier plans to take this same campaign model to at least 10 more cities in 2018.

8. This woman went zero-waste for one whole month to teach us a few lessons.

After finding out that the average American produces 4.3 pounds of waste every day and over 30 pounds of waste every week, Auri Jackson decided to try to live with zero-waste for 30 days. In the first few days, Jackson realized that most of the food sold at stores came in packaging in some form. Throughout the weeks, she figured out a system to bring her own mason jars and bags to fill up with fresh produce and bulk foods from the store. While she mentioned that a good side effect of the challenge was that she was forced to eat healthy, “I’m realizing that this challenge is a privilege in itself because most processed foods are the cheapest foods, and fresh produce can be very expensive.” However, in the long run, she noticed she was spending less money collectively.

Due to an increase in waste awareness and using a compost bin, Jackson came away from the month-long experiment with an impressively small amount of trash (a teabag, floss, a piece of plastic).

While we’re not suggesting you go as far as Jackson did, her video does encourage us all to be mindful of the waste you make and aware of what you use and throw away. After all, “we’re stewards of this land, so every time we negatively impact the system, we’re actually jeopardizing our ability to breath, drink water, consume food.” 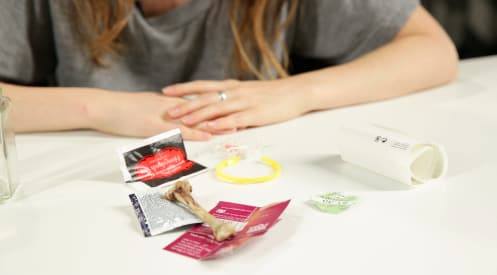 9. YouTube has made it easier to learn about the plastic pollution problem.

You don’t have to be Steven Spielberg to make an impactful motion picture. Activist Annie Leonard‘s YouTube channel is chockfull of viral informational vids over all kinds anti-plastic topics, ranging from bottled water to microbeads, from cosmetics to microfibers. Check out her quirky, educational videos on the storyofstuffproject channel.

Another great resource are TedTalks, which introduce viewers to the innovators behind the renewable resources and can put complicated issues and solutions plainly and into compact lectures. Check out this list of TedTalks on Plastic Pollution. 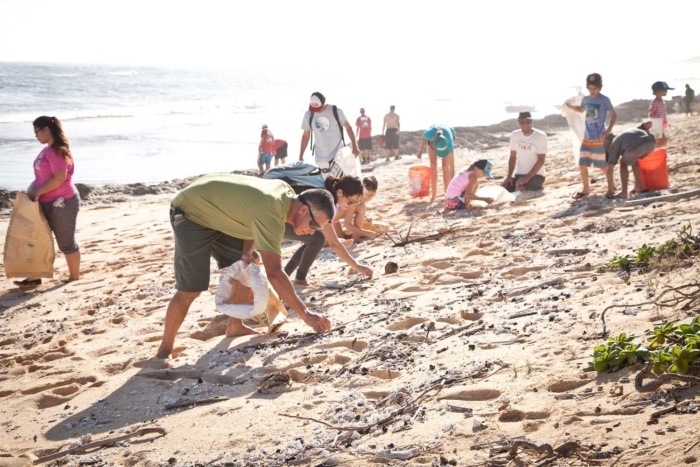 It’s easy to think that what you do doesn’t have an impact. That you are just one person in this massive world. But think about all those billions of other “one person”, sitting there thinking the same thing. If all 7 billion of us in the world did one conscious eco-friendly thing every day, our actions would add up and make a huge difference. Whether it’s organizing a beach or park clean-up with your friends, starting a composting bin in your backyard, bringing your own thermos to the coffee shop or canvas bag to the store, or voting for more bike paths in your town, anything and everything counts. Here’s a list of easy, but effective ways to get involved in the plastic solution today.