This Blogger Tried to Prove the Earth Was Flat. It Backfired Pretty Bad.

Within the scientific community, there exists a short-hand for idiocy and ignorance that has become widely adopted as a pejorative against people who refuse to accept empirical evidence and turn instead to conspiratorial beliefs: “Flat-Earthers”. The term is now so vastly acceptable and understood in its use that President Obama once expressed his own impatience for climate change deniers by stating, “We don’t have time for a meeting of the Flat Earth Society”. The term is popular because the notion that our spherical planet Earth could be flat is so far removed from scientific truth that it seems almost satirical to suggest such a falsity.

Disturbingly however, the Flat-Earth conspiracy appears to be gaining genuine traction amongst certain online populations, despite being a conspiracy theory so simple in its accusations that it almost seems primordial amongst others with more sophisticated intrigue such as the Illuminati or fake moon landings. Flat Earth theorists posit that our planet is, well, flat and its inhabitants are being lied to by the powers that be for, well, reasons unknown. One of the most popular online proponents of this theory is D. Marble, a prolific Youtube blogger, who consistently spouts his theory by doing highly scientific and convincing experiments (please note a tone of sarcasm) such as observing flat bodies of water and putting spirit levels on various objects. 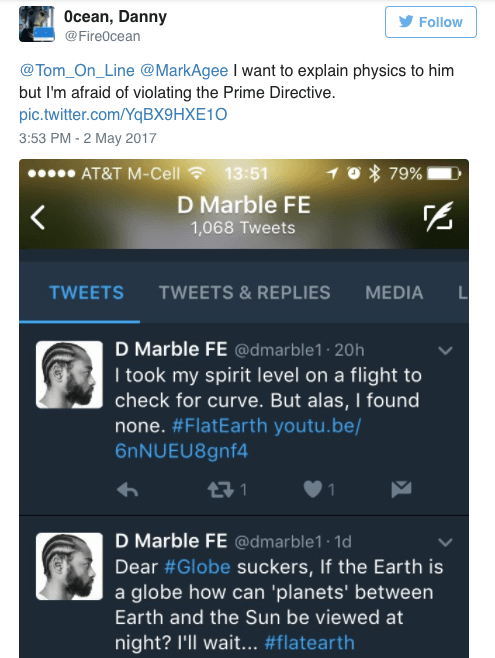 Earlier this month, the self-described “realist” D. Marble produced a video observing the movement of a spirit level on a plane, with the theory that the curvature of the earth should be examinable in the spirit level during the flight. D. Marble has employed the use of the spirit level before (and enthusiastically, it must be said such as in this video where he examines the flatness of a set of train tracks) to supposedly prove the Earth’s flatness but this particular video consequently went viral, likely due to the sheer scientific illiteracy of his original hypothesis. While many of his supporters exclaimed support for the experiment, praising its simplicity, many more took to Twitter to exclaim sincere shock and deride Mr D Marble’s experiment for its utter ignorance. One Twitter user pointed out that while a liquid level does theoretically work inside an air cabin, the plane and the level are perpendicular to gravity, which is pulling the level to the earth’s centre mass (causing this supposed appearance of flatness). In other words, the spirit level remains flat not because the Earth isn’t curved but because of the basic mechanisms of that old friend we call gravity. More specifically, many more users took to Twitter to ask the Youtuber why he doesn’t simply catch a flight to the end of the world to prove his point but this question seems, rather perplexingly, ignored by the Flat Earth community as a whole. 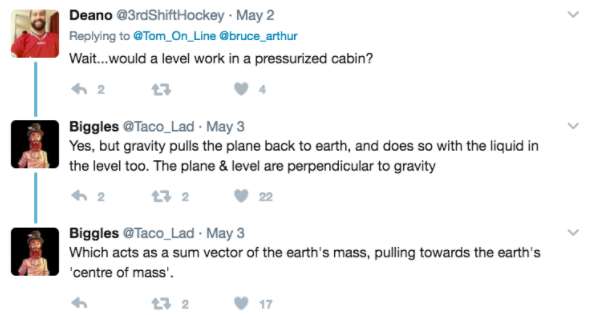 Despite the widespread derision of the Flat Earth claim, it appears to be growing in popularity amidst a conspiratorially-minded minority. In 2016 the rapper Bobby Ray Simmons Jr, otherwise known under his stage name, BoB placed himself firmly on the Flat-Earthing side of the fence with the following Tweet: “A lot of people are turned off by the phrase ‘flat earth’…but there’s no way u can see all the evidence and not know…grow up”. He furthered this claim by stating, “No matter how high in elevation you are…the horizon is always eye level…sorry cadets…I didn’t wanna believe it either”. At the time, Neil deGrasse Tyson shouldered the responsibility of refuting Simmons’ claims by pointing out that the curvature of the Earth was not enough to hide the skyscrapers of Manhattan from a mountain 60 miles away because they were simply too tall but BoB did not sway from his original claim and assured followers that if they did the research, they would come to the same conclusions that he had, “Don’t believe what I say, research what I say”, the rapper advised.

There is also a general misconception that a belief in a flat earth is an ancient (and presumably, mystical) concept held by societies such as the all-knowing Ancient Greeks. In fact, Aristotle had provided empirical evidence for the spherical form of the Earth by 330 BC (that’s approximately 2286 years before the official establishment of the modern Flat Earth Society, which I can’t help but feel is just a little embarrassing for all of us). For sea-faring societies and even simply sea-observing societies, the sphericity of the Earth was rarely contended due to the staggered disappearance of ships over the horizon and the subtle observable curvature of the ocean at the horizon. One recent study has noted that “since the eighth Century, no cosmographer worthy of note has called into question the sphericity of the Earth”.

Why D. Marble couldn’t simply look out of the plane window and observe a curved horizon like societies have done for thousands of years before him is a perplexing question, but hopefully he learns a little something from the backlash of scientific commentary that’s coming his way.