A Million Children Meditated Together to Raise Awareness on One Key Topic
Photos of the event are impressive and breathtaking.
Read More

Getting one child to sit still is a challenge in itself, but to get a million to do it is pretty unprecedented. Not in Thailand, however. Here, the Wat Phra Dhammakaya Buddhist Temple plays host to one of the most incredible events ever witnessed in modern history.

Every year, one million children from over 5,000 schools gather at the temple to take part in ‘V-Star Change the World’, a project which sees them meditating side by side in absolute silence for one whole day.

For world peace; something this planet is in dire need of. Each V-star, which stands for ‘virtuous star’, is specially selected to take part in the monumental event. They have all been recognized as examples of moral excellence in their schools and local communities. The idea is to bring these virtuous individuals together so they can connect with one another, form a support network and share stories about the good deeds they do every day.

It’s certainly not a walk in the park. Prior to the mass meditation, the children selected to take part are given 10 tasks to complete every day for 3 months. These tasks include saving pocket money, helping their parents with housework and making their beds.

Where it all began…

The project began in 2008 as part of the World Morality Revival, which was brought about by the abbot at Wat Phra Dhammakaya Temple, Luang Phor Dhammachayo. For the abbot, children represent the future and should be raised with strong moral values that can be spread to others. With the future more uncertain than it ever has been, it has never been more important. 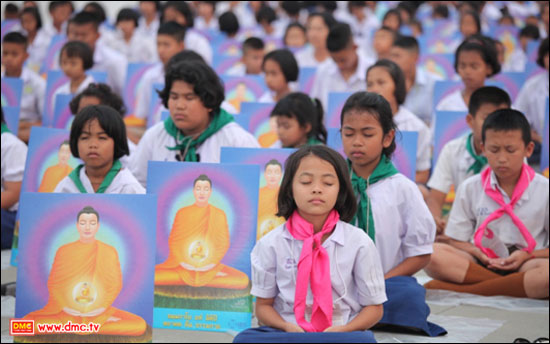 As for meditation, the program believes that it is the only activity that fills us with positive energy, fulfills our potential and brings people closer together. It gets rid of prejudice and everything that comes between us. However, the temple’s annual display has faced criticism from other Buddhists, accusing it of being a display rather than genuine virtue. Others have compared it to a cult because of the temple’s unwavering belief in what it is doing.

And yet, the project has absolute faith in its success and has visions of a peaceful human race. By eliminating the things that cause hurt in the world through meditation, the goal is to make relationships between people peaceful. Things like sex, gender, race, sexual orientation, political opinion and everything else that isolates people and causes conflict are aimed to not be an issue again.

The vision stems from the idea that we are all one. The project promotes the idea that with enough hard work and a combined effort, the future of the world can be altered for the better. The chants that ring out from the temple grounds reflect this vision. The children can often be heard repeating, “We are the leaders of a moral revival project.”

The Minister of Education, Prof. Dr. Suchart Thadathamrongvej, congratulated the children at the event: “Today I am very impressed when I see lots of children coming here together to do good deeds.” He went on to say, “I’m confident that Luang Phaw’s method is right and correct to change this world to be beautiful because of morality again.” The temple upholds that changing the world begins with changing ourselves. Because of this, everyone can alter the world’s future in a small way.