The journey of the refugee is a tumultuous and unpredictable experience, plagued by complex and multi-faceted issues that can prove disastrous socially, economically, and psychologically for the individuals facing them. For the first time in history, the world has surpassed 60 million displaced peoples, with a mass of people currently seeking refuge from conflict, violence, and persecution that outnumbers the population of the United Kingdom. This makes for an overwhelming number of humans who have been torn not only from their homes but also, devastatingly, from a sense of purpose and occupation in their home nations.

Whilst a certain amount of aid (woefully insufficient as it may be) exists for the clothing and housing of these refugees, opportunities for engagement in activities are few and far between – a lack that can cause physical and mental health problems. However, one woman has now dedicated her time to constructing a program that could viably support refugees in camps everywhere, not so much in terms of the fundamentals, but in terms of recreation, play, and enjoyable occupation where it is needed most. In an environment almost entirely devoid of happiness and enjoyment, Jill Maglio has devised the CircusAid program, which is very much as it says on the tin: a program dedicated to cultivating occupational engagement with the use of Circus activities. 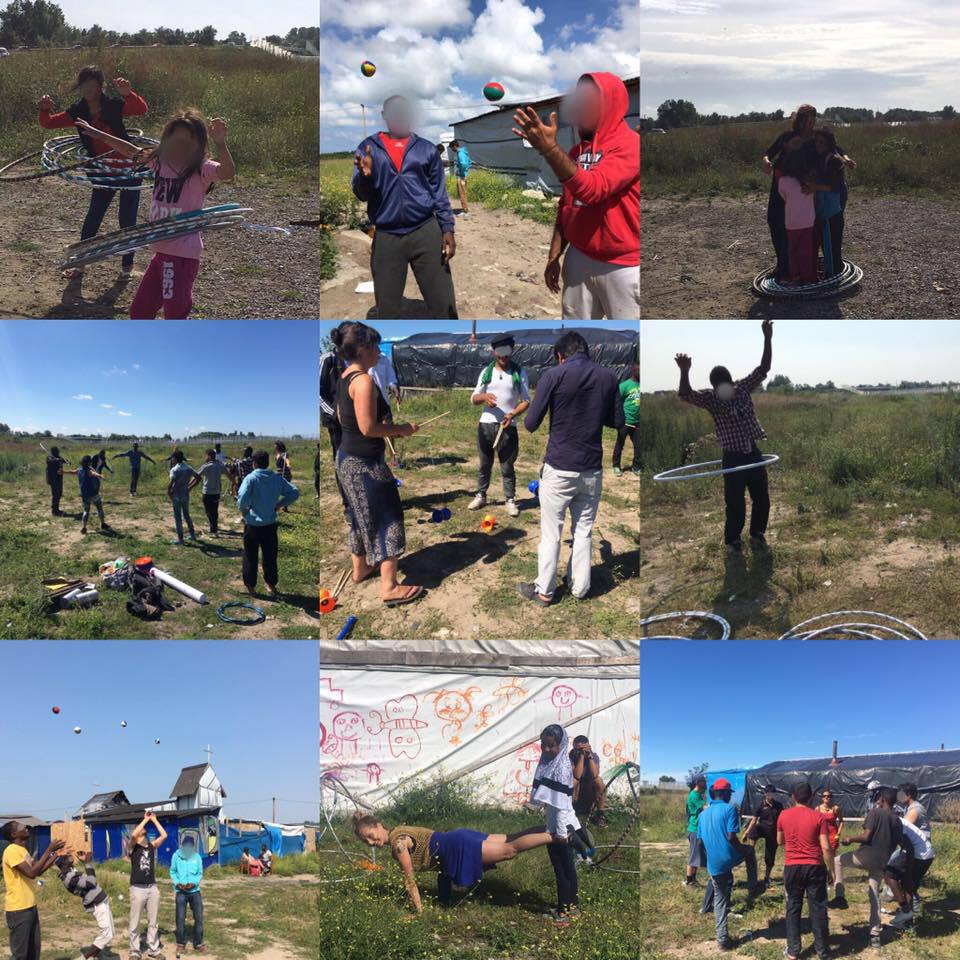 The CircusAid program engages adult and kid refugees in a blend of activities involving juggling, clowning, acrobatics and hula-hooping, all of which Maglio asserts as activities important to feelings of fulfillment and happiness. “We forget that adults need to play too especially during this time of vulnerable re-development” she states in her Fundraising description. While Maglio has run pilot programs in the past, specifically in the refugee camps in Calais, France, she aims to extend the concept to 6-week long programs in order to engage individuals more thoroughly, with a mixture of ages, genders, and nationalities.

Maglio was inspired to create the program upon her arrival on the Greek Island of Lesvos in 2015. At the epicenter of the Syrian refugee crisis, what she discovered was that her intention to provide support through clothing, medical donations, and camping equipment was simply not enough – the refugees that she encountered were suffering from the consequences of abject occupational deprivation. Occupational deprivation is an occupational science term that describes the detrimental health outcomes associated with when people are deprived from engaging in activities that give their life meaning. It is the likely implication of the unstable environment of living in a refugee camp and a violation of a person’s occupational rights. It was first observed clinically in prison settings, where inmates were deprived of regular and industrious activities. Maglio set to work in a refugee camp in Calais and called for volunteers to assist in developing the initial foundations of the CircusAid program. With the assistance of a small team, she established a 20-day program of circus skills. 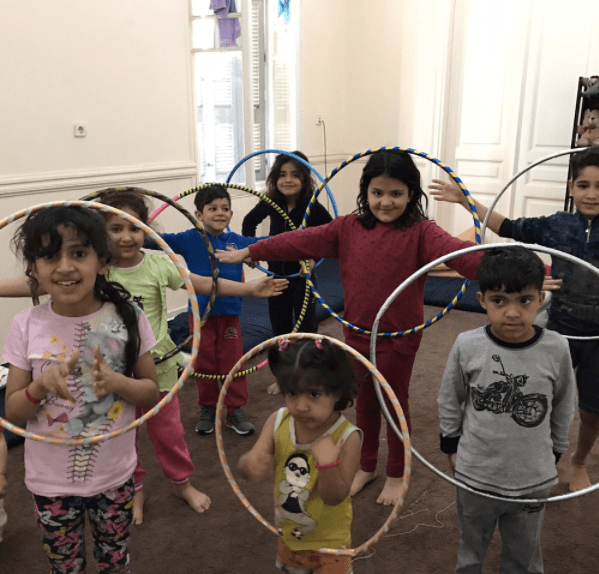 Maglio, however, reports to the Royal Society of Occupational Therapists in London that there was no shortage of issues to encounter in establishing such a concept in a refugee camp, including police resistance and being denied the ability to set up any circus infrastructure in the camp for ongoing lessons. Maglio also states that the lack of coverage she has been allowed in terms of photographing refugees makes the promotion of such a program logistically difficult and in her development proposal, she states that she now aims to bring the painter Paul Cooley to a camp in the future, for documentation of the events and its participants.

So, would circus really work in helping refugees? Maglio certainly seems to think so and quotes the findings of research conducted by the Palestinian Circus School in 2014 that highlighted “the necessity of leisure and play experiences for young people especially in environments where school institutions and political unrest inhibit creativity, exploration and freedom of expression”. However, the fact that this research was sourced from a circus school, the findings must be taken with a grain of salt.

Certainly the physical and emotional demands involved in tackling acrobatic and cultivating refined skills has a positive impact on psychological well-being but why should circus be used, specifically? Maglio tells Buzzworthy that throughout “history circus has been an effective means to empower marginalized communities, giving them a platform to creatively express dissatisfaction with oppressive socio-political infrastructures”, she also emphasizes the benefits of “life skills like problem solving, reciprocity, teamwork, empathy and perseverance”. 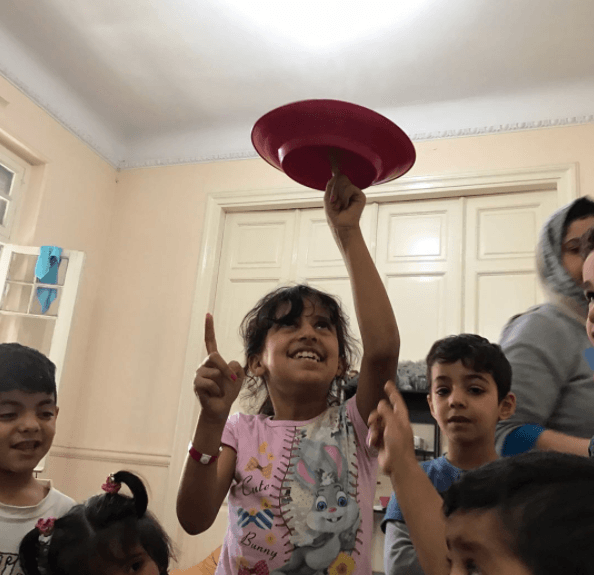 As for whether or not it appears to work amongst the refugee population she’s worked with in the past, Maglio reports that “People of all ages become children again and remember how to play and how good play feels”. CircusAid also appears to be highly helpful in bonding between ethnic minorities that had previously displayed hostility to one another, as she observed at the camp in Calais, “there was some turmoil, animosity, and even physical violence between different ethnic and religious groups within the camp” but the participation in CircusAid alleviated those tensions and they began to observe “pairs of mixed ethnic groups laughing, working together and having fun. When people have the opportunity to play together in a supported environment they build connection, respect and a sense of empathy for each other”.

While the funding to basic living resources such as housing, clothing, and food for refugees is absolutely vital, Maglio believes that resources need to be spent on all areas that contribute to the well-being and resettling of refugee populations. While one may be inclined to think of the activity as purely recreation based, Maglio states “I don’t consider CircusAid to be recreation. CircusAid is a technology designed to address occupational deprivation while teaching life skills to promote resilience and community cohesion”. Play is perhaps more psychologically and socially significant than we tend to consider in everyday life.

For now, Maglio is turning her efforts towards expanding the program on a wider scale and predominantly involving the vulnerable adult refugees that need the support. CircusAid may very well become a staple program in the resettling efforts for vast numbers of refugees in the near future, if she continues to witness the same degrees of success as she did in Calais.