Can This Vending Machine Help the Homeless Survive Winter?

Can This Vending Machine Help the Homeless Survive Winter?
Action Hunger wants to place fully stocked vending machines on the streets, available 24/7 for those in need.
Read More

Each winter, families around the world celebrate holidays, health, and happiness together, comforted by roaring fireplaces, scrumptious food, and good company. But what about the 160 million people huddling for warmth on street corners? How will they survive the extreme storms and pop-up ‘bomb cyclones’? How will they fortify themselves to have strength for one more night in the elements until they can get back on their feet again? Thanks to Huzaifah Khaled, founder of Action Hunger, this winter, those in need will have regular access to life’s basic necessities (water, food, clothing, toiletries), all via vending machine.

Action Hunger is a new initiative in which fully stocked vending machines plan to be placed on the world’s city streets, available 24/7 and completely free of charge for all homeless street sleepers. Their mission is to “alleviate poverty and hardship” amongst the homeless in the United Kingdom and beyond, and to provide a lifeline for those in need while government policies work towards eliminating homelessness altogether. “Homelessness has become so accepted in our society that we often don’t even look at these people,” Khaled told The Washington Post. This mentality must change if we are to combat homelessness successfully.

How Action Hunger Was Born

Khaled created Action Hunger after he noticed an increase in homeless street sleepers in his hometown of Nottingham, England, especially in the train stations he rode back and forth to school at University of Cambridge. He began to talk with some of the folks, bought them coffee, and over time, developed friendships with many of them. Khaled, who recently received a Ph.D in law, quickly realized that for the homeless, even the most basic necessities are difficult to access, especially due to the limited hours for drop-in services at day shelters.

Action Hunger’s website advises to dispose of the harsh judgment and criticism typically given to the homeless, as “a number of different personal and social factors can contribute towards people becoming homeless.” It goes on to list eviction, medical bills, domestic violence, unemployment, mental illness, and addiction as potential circumstances for losing stable housing. Tackling these problems requires both public and family support. There had to be a more effective way to get fundamental necessities to his homeless friends, Khaled thought. Why wait for someone else to come up with an idea when he could give it a try? 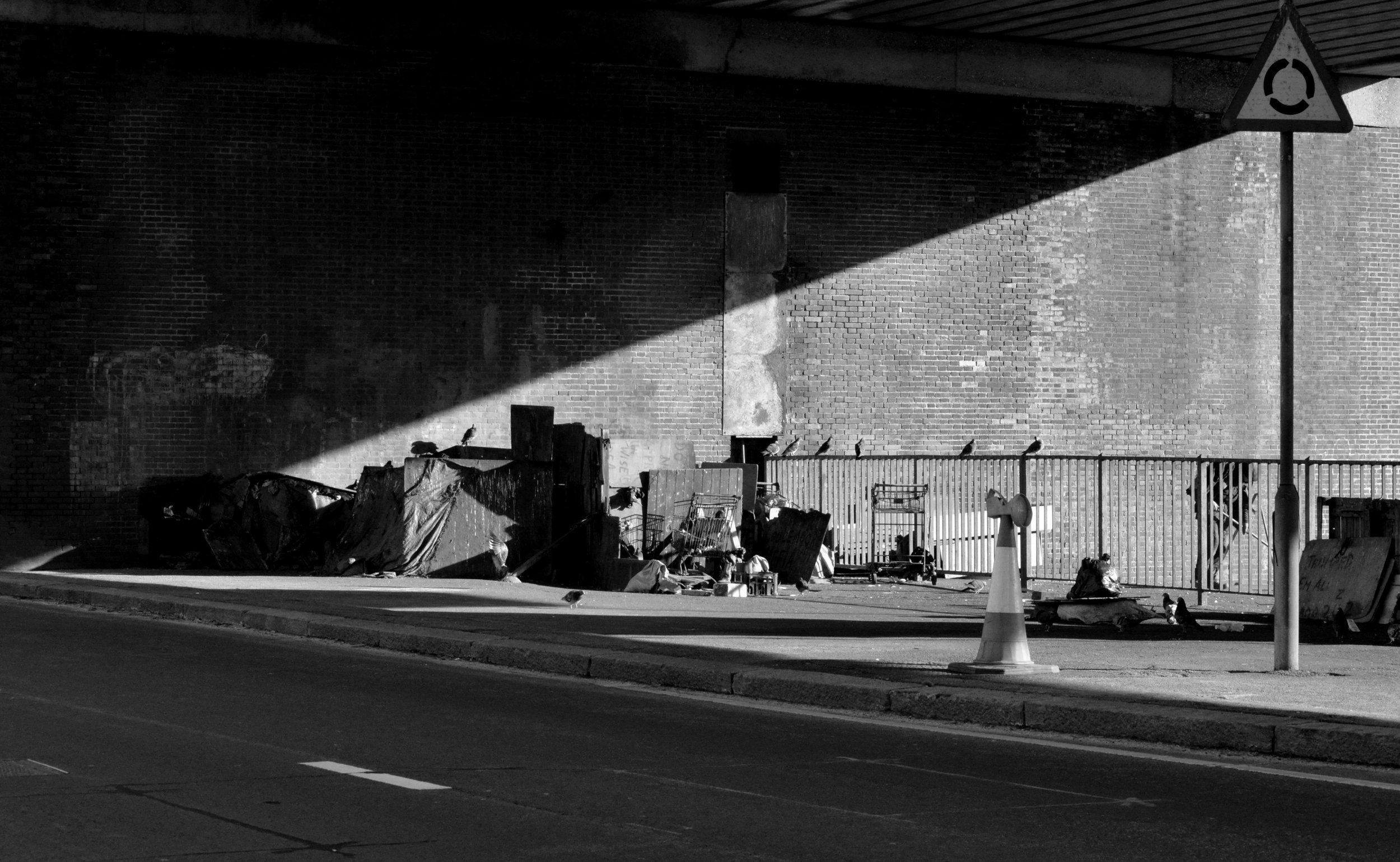 Why a Vending Machine?

Khaled has toyed with the idea of initiative for the past two years. His initial plan was to install stocked refrigerators in cities across the United Kingdom, but that was riddled with problems. For one, how would he automate the fridge or track the supply usage? He switched gears and began sketching out his dream for a network of free vending machines taking the world by storm.

After proposing his idea to over 50 European manufacturers, Khaled received a thumbs-up and a free machine (originally a mere $13,000) from N&W Global Vending, one of the largest vending companies in the world. The first vending machine launched in December 2017 at a Nottingham shopping center. 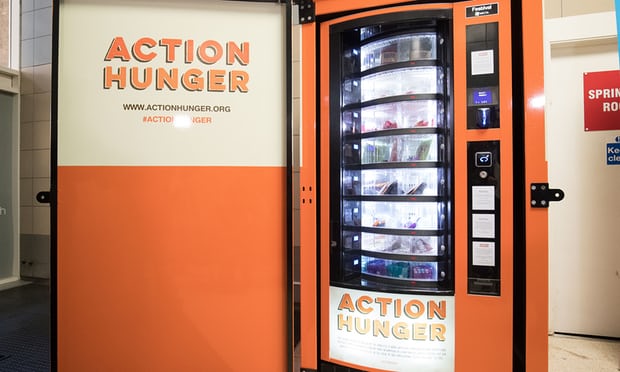 How the Vending Machines Work

Excess food is received from supermarkets and food recovery programs, like FareShare or Rescuing Leftover Cuisine, and hygiene items are purchased by Action Hunger. Volunteers then distribute daily items to restock the vending machines. Meanwhile, the homeless can access the machines with a special key card, provided to them by Action Hunger’s partner organization, The Friary, a day shelter which serves the homeless in Nottingham.

The card is similar to using a debit card to get money from an ATM – you just have to insert the card and take your goods. However, those in need may only pick up to three items a day from the dispenser. The limit on items, according to Action Hunger’s website, is to prevent dependency on the machine. The vending machines do not act as the sole solution to combating homelessness. They are the practical arm of the mission to cope with homelessness, and will complement the empathic support organizations, like Kevin Adler’s Miracle Messages, who engage with the humanitarian elements of the issue.

Action Hunger has been criticized for encouraging a street lifestyle by making it easier for people to sleep on the streets, rather than seek help in an advice-giving shelter. But Khaled argues, “We could have not put a limit on how many items people could receive, and not built in a system of checks. All of our users in Nottingham have to check-in with the Friary once a week for their cards to continue working.” 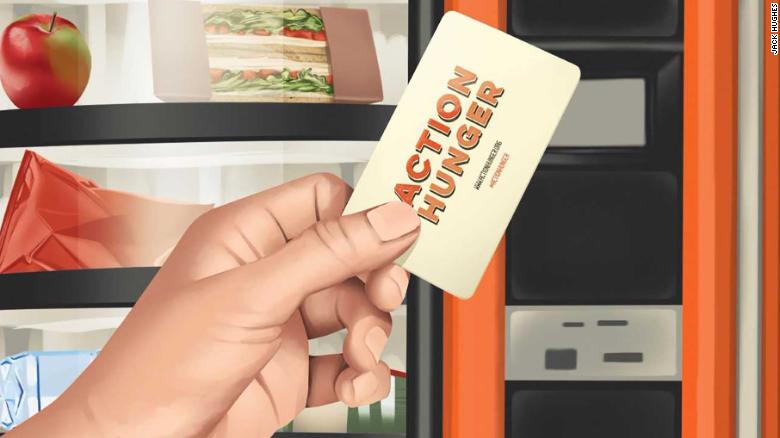 Khaled plans to expand his network of altruistic vending machines across Europe and the United States, with 25-30 machines in use by the end of 2018. The coming months will see installations in New York City, Los Angeles, Seattle, and San Francisco. Currently, his goal is to monitor which products in the machines are highest in demand, and to begin a longterm study using keycard data to figure out whether access to free basic needs correlates to getting people off the street.

Although he hopes Action Hunger is a step in the right direction to combatting homelessness, Khaled can’t help but wish that his charity was not needed. He said, “I would love nothing more than to shutter this charity next week.” 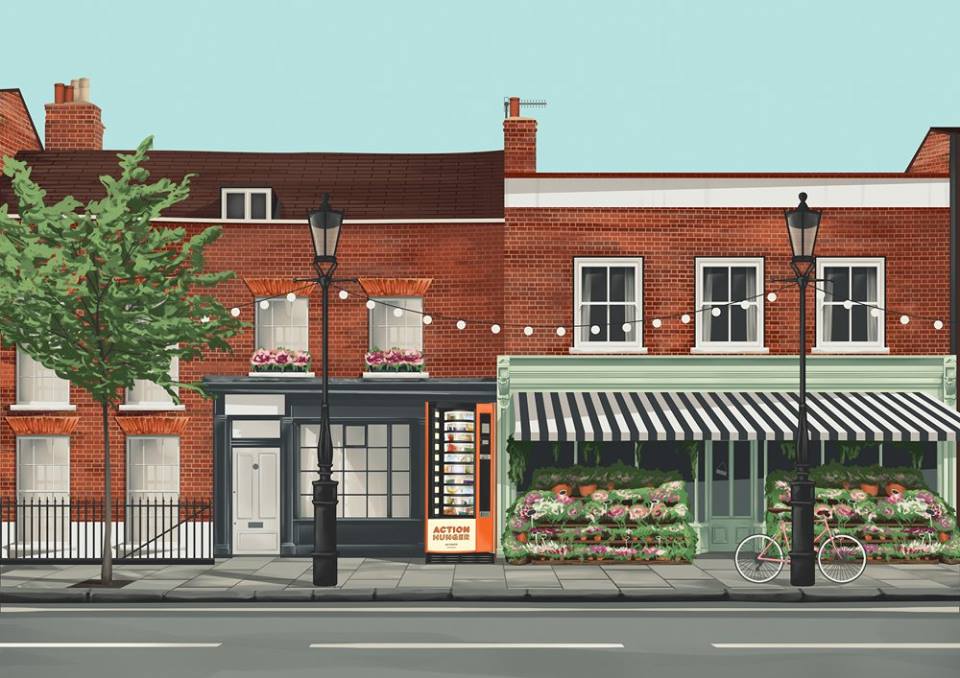