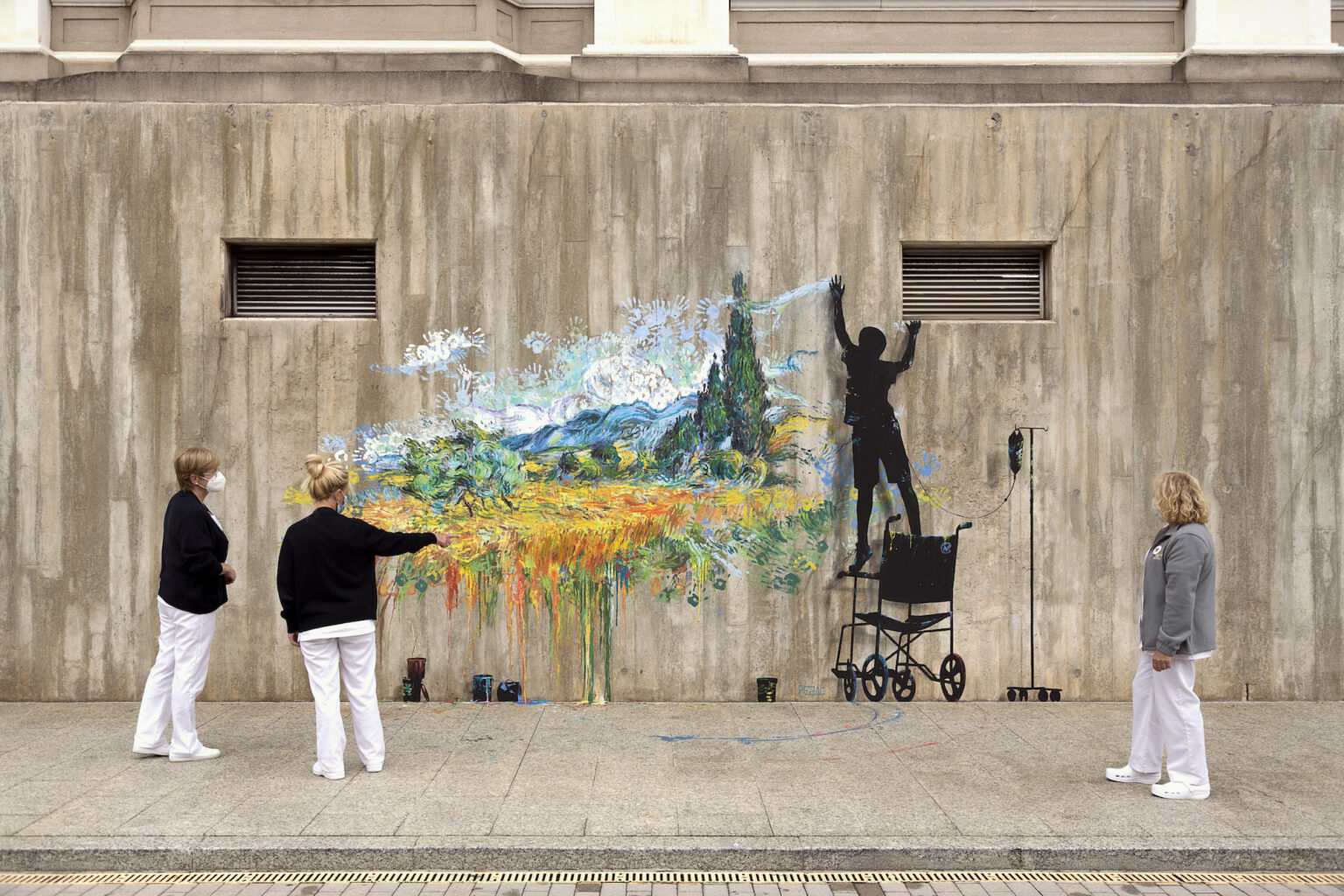 First, it was China, then Italy, then Spain that witnessed the damage done by the coronavirus early on before it spread across the globe. Spain’s hospitals were overwhelmed with the sick and healthcare workers have fought tirelessly, day after day, to help those who tested positive for COVID-19. Spain did eventually see its numbers of positive cases drop — but it would only be temporary.

In October 2020, the country’s number of positive cases began to tick back up and Spain’s government issued a state of emergency in Madrid, with the capital city and several others going back into lockdown. So far, the pandemic has claimed 50,000 lives in Spain and Spanish artist Pejac wanted to honor the health care workers fighting to keep that number from climbing higher.

The artist unveiled a trio of striking murals called Strength that function as a gesture of gratitude to the country’s doctors, nurses, and others fighting on the frontlines in hospitals and clinics around the country.

The murals can be found in the artist’s hometown of Santander at University Hospital Marqués de Valdecilla with each mural representing different aspects of the pandemic and the ways in which we could respond to them. As for his decision to paint the murals, Pejac said he wanted to say thank you to health care workers by “offering them what I do best, which is painting.”

From far away, “Social Distancing” would appear as just a crack in a wall. Step closer, and it becomes apparent that it’s a painting depicting people trying to escape a widening crack in the building’s facade. The trompe l’oei artwork creates the illusion of a gaping crevice with hundreds of human silhouettes trying to escape the black abyss.

The piece functions as a metaphor for the wound that the pandemic has left on society and a tribute to the healthcare workers putting their lives on the line to help victims of COVID-19.

The pandemic has shifted the relationship between patients and healthcare workers. The visually striking wall art features two silhouettes — one a coronavirus patient, the other a health worker — several feet apart, but looking at each other.

While the silhouettes may be black and not touching, their reflections have Monet-style bursts of vibrant color and show the much-needed physical contact that so many have had to do without since the pandemic began.

Pejac’s third piece depicts the silhouette of a child standing on a wheelchair with hands outstretched. The child is recreating a version of Vincet Van Gogh’s “Wheat Field with Cypresses.” What makes the final piece particularly special is that it was created in unison with the help of the hospital’s young oncology patients. “This is something that we, as a society could do—take this crisis and use it to propel us forward,” Pejac said.

As for the hospital, Pejac said that they’ve been incredibly supportive. “From the first moment, the hospital has been receptive and enthusiastic and that has made the project flow in a harmonious and easy way. In addition, they have given me total creative freedom and it has been a luxury to have their trust and support.”