This Brain Implant Could Give The Paralyzed Control Over Their Limbs

This Brain Implant Could Give The Paralyzed Control Over Their Limbs
A new brain implant smaller than your finger nail might be a stepping stone towards fighting paralysis.
Read More 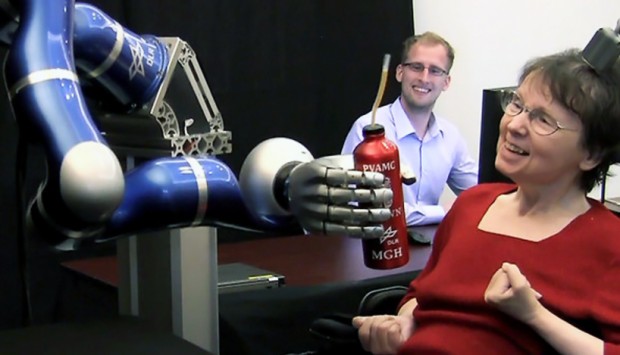 A new program known as BrainGate is working on an implant that will allow people who are paralyzed to have control over their limbs.

While progress has been made in developing prosthetic limbs for amputees that patients control with their minds through computerized implants, helping those with paralyzed limbs has proven more difficult. This is primarily because human nerves and muscles require much more complex means of control than prosthetics. According to Singularity Hub, Braingate is moving closer to developing an implant for those with paralysis that is very similar to the one used for prosthetics patients.

The system will transmit a patient’s mental signal to move an arm into the implant, which will be record and send back out the signal to an electric stimulation device that will activate the muscles.

BrainGate’s researchers first tested their system with the implant recording brain signals and then performing simple commands with the cursor on a computer. Next, came the success of having patients control robotic arms with their brain signals. As part of the testing process, the researchers have developed a wireless sensor to record neutral activity that thus far has proven safe in primates.

While the implant has the ability to signal up to 18 hand and arm muscles to motion, it is limited to single-arm movement at the moment. This is because controlling both arms and legs in tandem tasks takes a different and large set of neurons in the brain.