‘Civil Disobedience’: Why Thousands of Activists Are Risking Arrest Worldwide

‘Civil Disobedience’: Why Thousands of Activists Are Risking Arrest Worldwide
Last week's events are considered to be the largest civil disobedience act in history.
Read More

“Civil disobedience is a powerful tool in social justice work. The law is not sacred and to challenge it shakes our consciousness.” – Ricken Patel, Director at AVAAZ

The world’s largest coal port stands in a small city on the pristine coast of New South Wales, Australia. Last week, close to 2,000 people from around the country and abroad descended onto the beach and into the water surrounding the port’s entrance, using kayaks to block its shipping channels and capturing the attention of the nation.

In a second action nearby, a group of 70 people illegally blocked a rail bridge that acts as a critical point in the transit of Australia’s coal (Australia provides around 30% of the world’s coal trade). 65 people were arrested, including a 94-year-old war veteran and 2 mothers with their 3-month-old child. 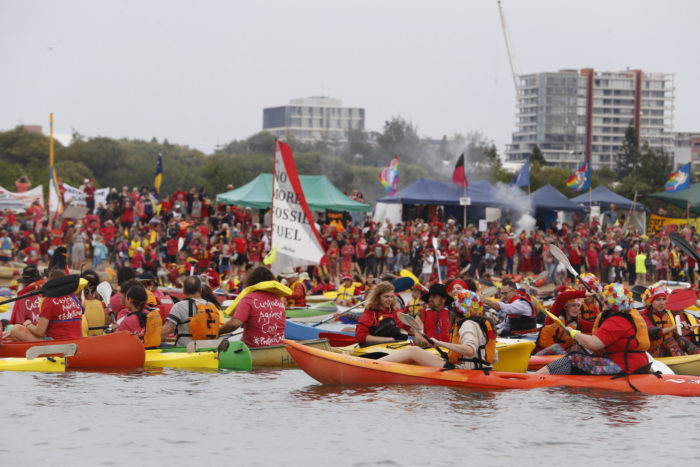 The combined action on this day is said to have stopped the transport of approximately 1,800,000 tonnes of coal, disrupting $100 million of capital from the fossil fuel industry. People from all walks of life – local First Nations’ people, visitors from abroad, war veterans, teachers, doctors, students, musicians, elderly and infant, seasoned climate activists and those who had never participated in an act of civil disobedience before – stood (and floated) in solidarity, risking arrest to deliver a clear message to their government. 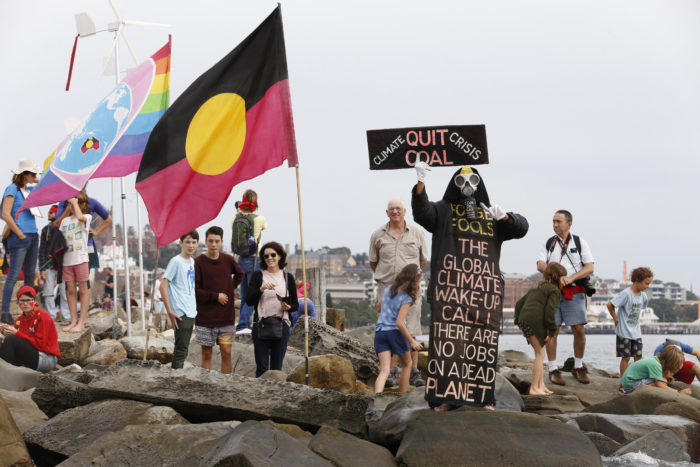 The events in Newcastle were one link in a chain of non-violent actions that were carried out across the globe between May 4-15, coordinated by a global organization called 350.org. The campaign, “Break Free”, was an unprecedented mobilization of local and international organizations to shut down the dirtiest and most polluting fossil fuel projects across six continents.

This global wave of civil disobedience – which has been deemed the largest in history – comes as we witness the sudden and dramatic warming of the planet, with every month of 2018 breaking heat records. On the last day of Break Free, a key monitoring site in Tasmania, Australia recorded atmospheric carbon-dioxide exceeding 400 parts per million for the first time in history.

“The laws of nature and the laws of economics are in conflict at the moment. Either everything changes because the climate changes, and it changes our physical world in ways that we can barely fathom. Or, we change our economy in fundamental ways. But the idea that there is some middle road, where we continue on pretty much as is? That’s actually not available to us.”- Naomi Klein, social activist and author of This Changes Everything- Capitalism vs The Climate.

Last year, 195 countries adopted a universal climate agreement in Paris at COP21, a deal that called for the end of the fossil fuel industry. All governments agreed to keep global warming below 2 degrees and strive for 1.5 degrees. 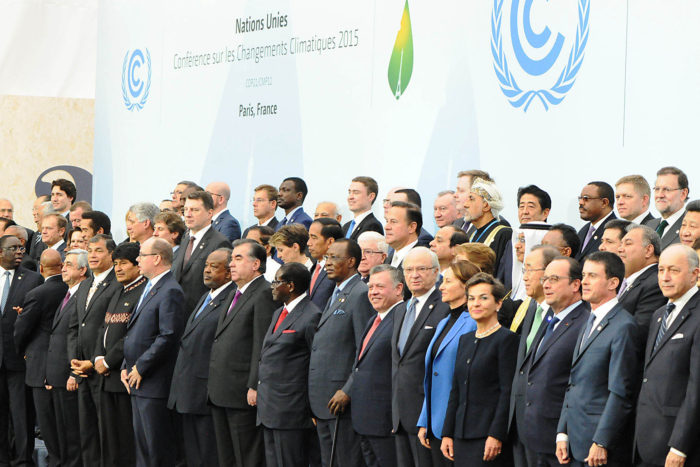 However, no detailed timetable of country-specific goals was assigned during the agreement, and since then, our governments have failed to take any meaningful action to transition from fossil fuels to renewables. In the Philippines for example, according to Lidy Napcal (Philippine Movement for Climate Justice), the government is planning to set up at least 50 new coal plants over the next few years. This plan is not consistent with the pledges given at COP21.

“With Break Free, it’s the first time we are seeing a concrete timeframe when escalated actions are happening. We can’t wait for the politicians to catch up with that understanding, so people are basically taking things into their own hands and doing what needs to be done on the ground.” – Hoda Baraka, Communications Manager at 350.org

Widespread, coordinated civil disobedience is a powerful tool for change. Its effect is in its disruption of ‘business as usual’, which makes it more costly for the party under fire to resist change than to agree to it.

The power of mass protest is exhibited through many moments of major change throughout history: the Civil Rights Movement (1954-1958), the Egyptian Revolution (1919),  and the Women’s Suffrage Movement (1920) to name a few. 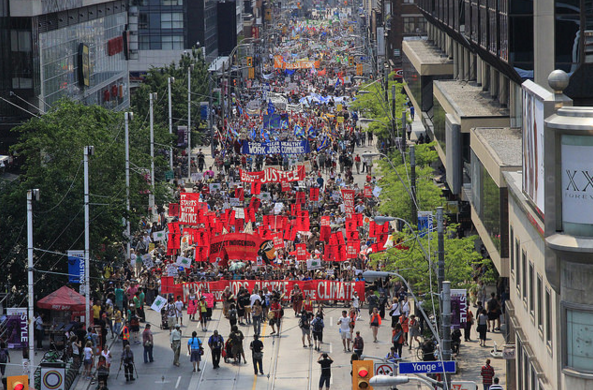 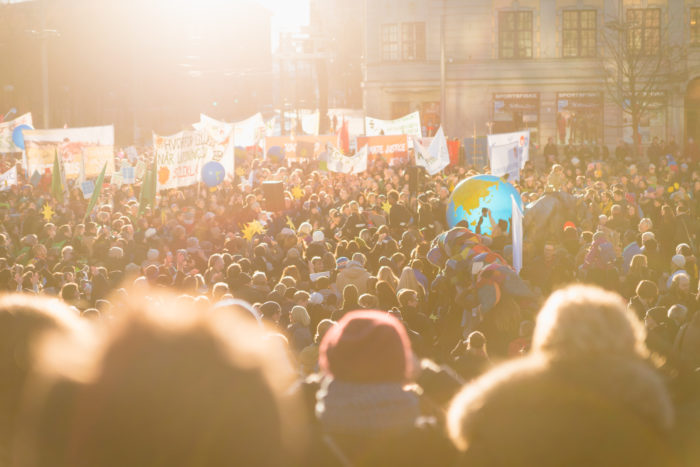 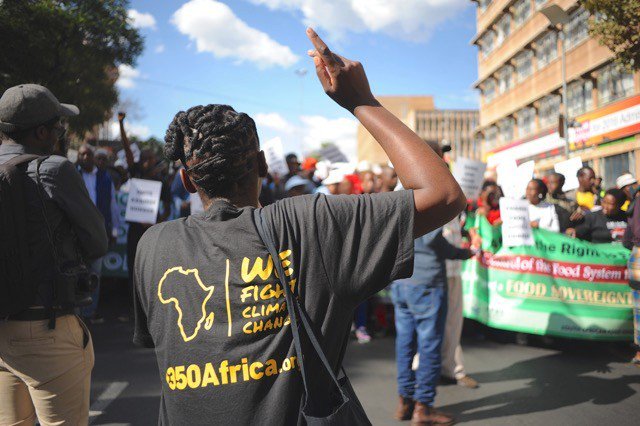 A small sample of actions happening around the world during Break Free included:

New Zealand – Protesters confronted banks that lend to the fossil fuel industry, demanding that they divest. Hundreds blockaded the doors of ANZ banks in Wellington, Christchurch, Dunedin and Auckland, drawing attention to the fact that the company has $13.5 billion invested in Australia’s fossil fuel industry.

Oloibiri, Nigeria – Climate activists gathered at Oloibiri, the site of Nigeria’s first oil well that has now run dry, to show what happens to communities when such a thing takes place.

Albany, New York – Protestors assembled a flotilla on the Hudson river to stop the dangerous, fracking oil ‘bomb trains’ that pass through there.

Proshim, Lusatia, Germany – 3,500 people from a German alliance of activists called Ende Gelande (This Far, No Further) shut down the Vattenfall coal mine, Europe’s largest and dirtiest. 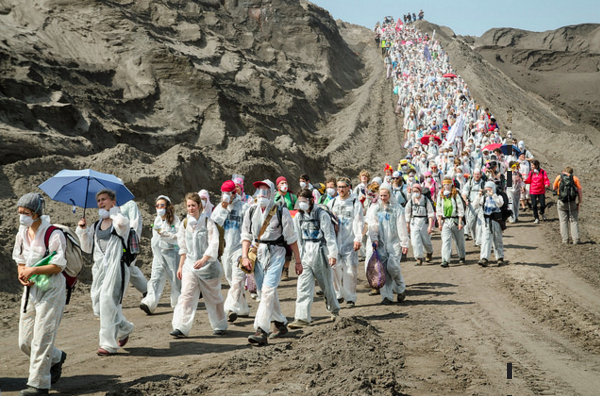 Prior to the mobilization, in a global online workshop broadcasted by 350.org, leaders within the organization from Brazil, Nigeria and Switzerland met to publicly discuss the upcoming Break Free campaign, sharing information on the principles and goals of the movement itself, and how to get involved as a group or an individual.

Their aim is to educate and inspire individuals and communities to take their own actions beyond this initial wave. By creating a globally unified community, those behind Break Free want to make a statement that is impossible to ignore.

“What does success look like? That the message is clear and global solidarity on this issue is exhibited. That the resistance continues and the vision for an alternative future gets stronger and stronger. That we start to see the dominoes of the fossil fuel industry falling. They have already started and we really need that to accelerate.” – Payal Parekh, Program Director at 350.org

For more information on actions that took place within the Break Free movement, visit www.breakfree2016.org

Learn more, find out if there is an upcoming action near you moving forward at 350.org

Watch DISOBEDIENCE, a film on the climate crisis, civil disobedience and the the Break Free movement.