What started as a bit of a fun experimentation, and an easier workout than climbing a mountain for snow muralist Simon Beck, has now taken over his life. His enormous and perfectly measured designs sprawl the area of multiple soccer fields and are dazzling to say the least. We caught up with Beck for an insight into his unique and impressive art form.

What inspired you to make your first snow artwork?

Well, it was just a bit of fun. I just drew a star on the lake outside the building where I live in winter. I then drew some more for my own satisfaction, and gradually things came together.

I bought a digital camera and used to have a lot of fun playing with it on Photoshop. Then snowshoes were on sale so I bought a pair. I quit my job in 2009. I decided then to take it seriously and to work towards the production of a book. 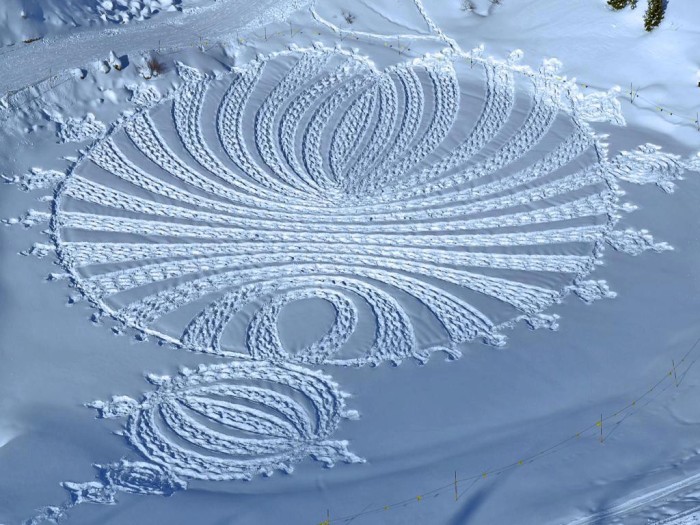 What were you doing prior to moving into this line of work?

Cartography (orienteering maps). It’s much the same process of my snow drawings, but in reverse.

Is there a message or feeling you hope to send with your work?

I want people to want to care for the environment, and I hope I inspire this by emphasizing the beauty of snow and mountains. I’m concerned about global warming, sea level rise, and the unusual weather patterns that are occurring. 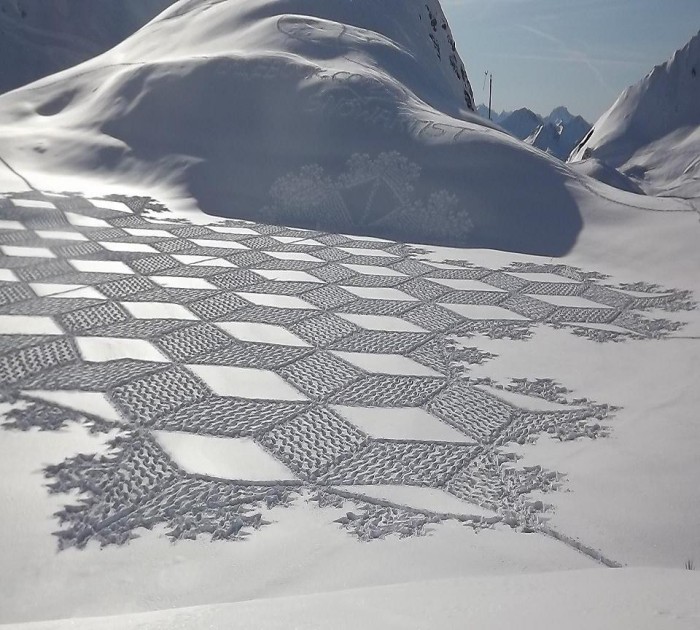 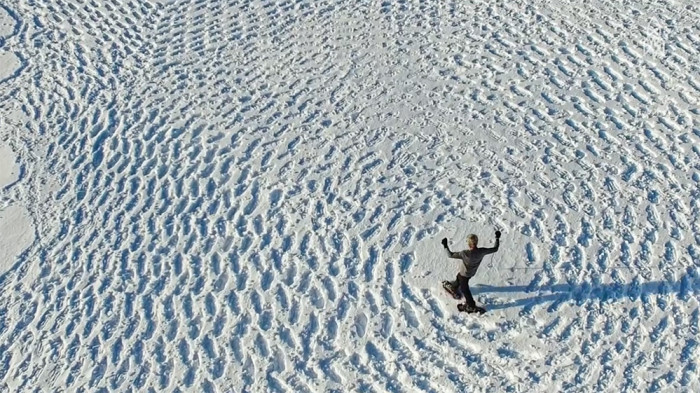 Could you walk us through the process of creating one of your snow artworks?

There are 3 stages. Drawing the main lines and careful measuring, then drawing the remaining lines, and finally, shading the areas.

What are the challenges that arise while creating them?

Choosing the right day (a matter of studying the weather), maintaining accuracy (avoiding errors adding together) and keeping going when I am getting tired after 7 hours of continuous work.

I stay on track by having positive thoughts like ‘every hour past means the finish line is a little closer’. Also I do the most boring bits first so the bits I prefer doing are at the end. Also, the longer one has been working, the more time will be wasted if you give up. 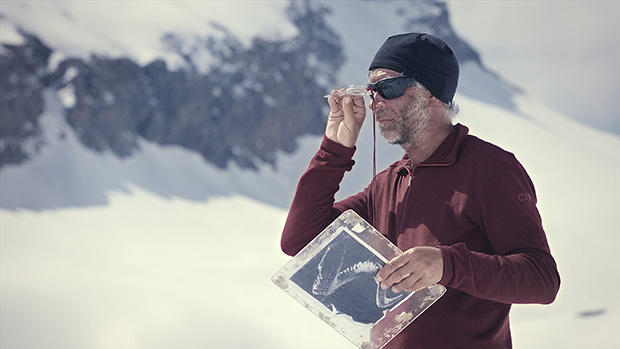 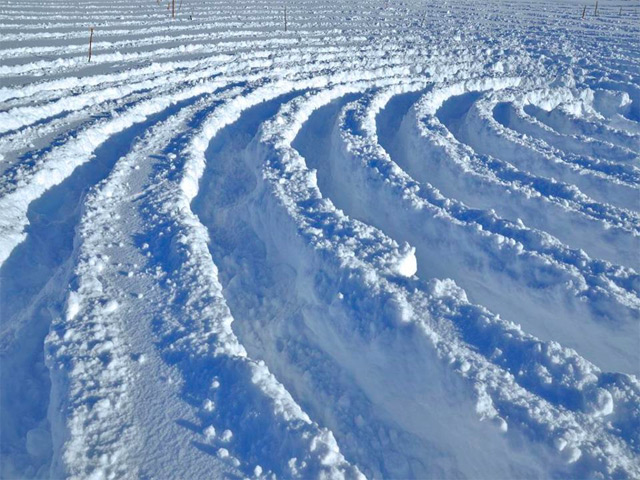 How long does it take to create a snow drawing?

It varies. For a piece that takes up the area equivalent to a soccer field, it takes 3 to 4 hours. Most drawings are about 3 soccer fields in area.

Can you describe your state of mind while you are creating these artworks?

It has become like a job. I try to keep going and keep my mind on it. I try to get the least pleasant part completed first. Doing it in the most logical sequence is boring, so I mix things up a bit sometimes. I listen to music once the brain work has been completed. I don’t think I could stand the boredom if we didn’t have these personal stereos.

I don’t listen to music when I am being filmed as there is too often the need to communicate with other members of the team, and then a certain amount of singing gets done. 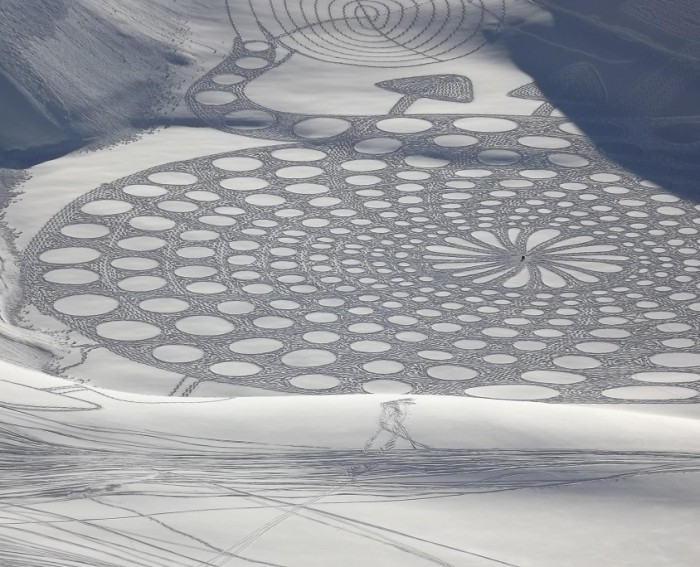 What has been your most significant moment as an artist?

About five weeks ago, the first time I got paid and given gear. I drew “Quattro” in Megeve. It was proof that my work isn’t just a waste of time, and I’m not just the local nutcase.

What is the best piece of advice you have ever received?

Sometimes the biggest mistake you can possibly make is not admitting when you’ve made a mistake.

Do you have a dream destination where you would like to create a snow artwork?

A lot. I would say the area of grass surrounding Salisbury Cathedral in Southern England or Christchurch Meadow in Oxford. Snow in these locations is rare, so for a sensible suggestion, I’d like to do so at the lakes near the Drei Zinnen in the Sixtener Dolomites. Or Central Park in New York. Or Yosemite. 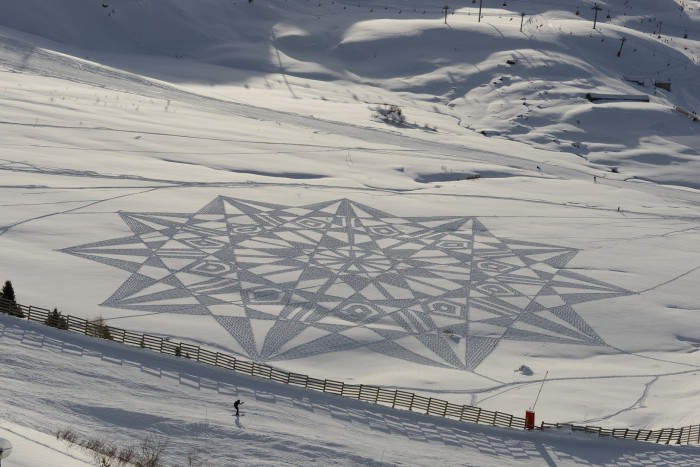 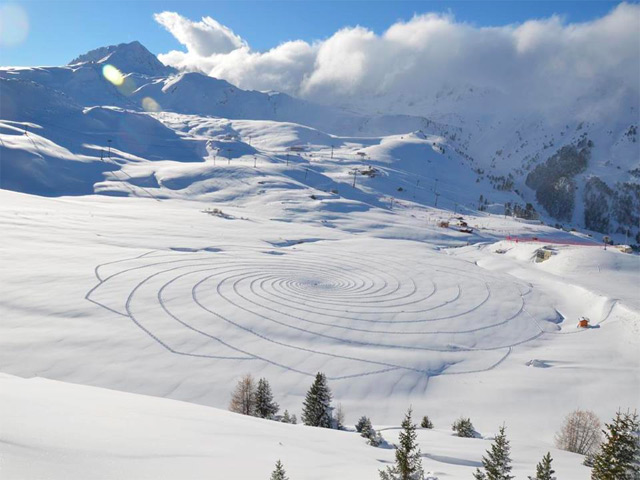 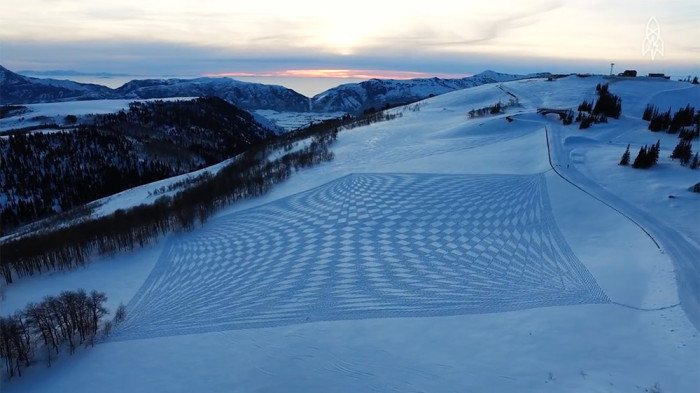 To see more of Simon’s work, visit his facebook page.