Got a Dark Sense of Humor? You’re Not Depraved, Just Smart According to Science

Got a Dark Sense of Humor? You’re Not Depraved, Just Smart According to Science
A dark humor is indicative of a higher IQ, according to a new study.
Read More

If you’re the kind of person who reads a news story about a person who choked to death during an eating competition and comments “guess he bit off more than he could chew”, you’re probably not evil, just intelligent.

In a study published in Cognitive Processing journal, researchers at the Medical University of Vienna reveal a correlation between being smart and having a dark sense of humor. The researchers define dark humor as “a kind of humor that treats sinister subjects like death, disease, deformity, handicap or warfare with bitter amusement and presents such tragic, distressing or morbid topics in humorous terms.” Shows like South Park, Always Sunny in Philadelphia and comedians like Jim Jefferies have mined the most depraved of scenarios for laughs. And while this type of dark humor might not be for everyone, it’s positively associated with higher verbal and nonverbal intelligence, as well as education level.

To come to this conclusion, the researchers conducted a study on 156 men and women of various backgrounds, and asked them to view a series of cartoons. The participants whose average age of 33 were first given a standard IQ test and tested for various aspects of their personality, such as aggression and overall mood. They were then shown the cartoons by German cartoonist Uli Stein (whose illustrations tend to be rather twisted), asked if they got the joke, and whether they found it funny or vulgar. 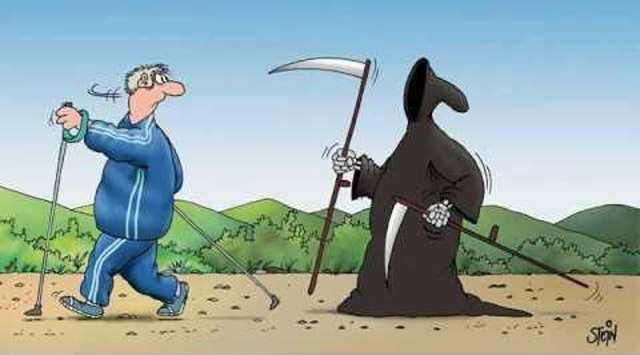 Those who said they enjoyed the cartoons the most tended to test for higher IQs, be better educated, less negative in mood overall and have lower aggression. Those who didn’t care for the cartoons, well, the research found them to have average IQs, higher levels of aggression and be in a negative mood more often. Those who understood the joke, but only found them to be moderately funny were also found to have average IQ scores, but had a more positive outlook on life. So, what exactly does laughing at a cleverly worded joke about an unfortunate event reveal about the human psyche?

The takeaway for the researchers: those that were able to find the humor in the most unfortunate of situations generally had a positive frame of mind that allowed them to pull the humor from tragedy. Indeed, it takes both cognitive and emotional skills to understand humor typically classified as “dark.” Many people use humor as a coping tool for dealing with trauma, and having the ability to see the humor in an otherwise bleak scenario, can be seen as a way of trying to stay mentally positive.

So maybe not everyone at the party is going to laugh at your plane crash quip, but don’t take it personally. They’re probably just not as smart as you.