One-of-a-Kind City Abandoned Religion, Politics, and Economy. Here’s How it Works
Residents of Auroville are artists, scientists, doctors, farmers, and people from all walks of life trying to make a difference.
Read More

Imagine a place where people from all nationalities work together in harmony, regardless of skin color, gender, ethnicity, or religion. A place where cash has no value, and local farms keep citizens mostly self-sufficient in regards to fresh food. Sounds too idealistic to be true? A town named Auroville is a community of just this kind, and has been operating in India for more than fifty years.

Auroville is an international community, protected by UNESCO. Since 1968, Auroville has been home to people from all over the world, people who contribute their time, effort, ideas, and passion to making this utopian vision of sustainability and community into a reality. Auroville’s story begins in the 1960s, when a woman named Mirra Alfassa resolved to transform a 20-square kilometer plot of wasteland into a city that would live up to the ideals of Indian philosopher Sri Aurobindo, who believed in human unity and that man is “a transitional being”. After Aurobindo’s death in 1950, Mirra Alfassa took it upon herself to realize his vision via Auroville, the City of Dawn.

“Auroville wants to be a universal town where men and women of all countries are able to live in peace and progressive harmony, above all creeds, all politics and all nationalities. The purpose of Auroville is to realize human unity,” she said in the first public statement for the new township, released in 1965.

Located about 10 km north of the south Indian city of Pondicherry, Auroville was finally brought to life in 1968, with Alfassa – known as The Mother by residents and followers – at its head. At the Inauguration ceremony, in front of thousands of people from 124 countries, Alfassa set out a charter, describing Auroville’s vision and mission as a place of unending education and constant progress, as a place which belongs to humanity as a whole. Auroville offered its residents a “youth that never ages,” and a promise to bridge the past and the future by taking hold of innovation and technology to advance itself and humanity.

The City of Dawn

As of September 2018, Auroville is home to 2,953 people from 58 countries. Photos and pictures of The Mother, who died in 1973, can be found at every turn, but this recognition of the city’s founder are the closest thing that Auroville has to religion. The gold dome at the center of town is called the Matrimandir, surrounded by peaceful gardens and tranquil walking paths, and it is equipped with a solar farm. Many of the buildings in Auroville are unique, built to reflect experimental architecture and to make use of renewable practices and resources. The city includes a botanical garden, farming and industrial areas, a seed bank, forests, biogas plant facilities, and more, all of which contribute to Auroville’s vision as a sustainable place with experimental practices. Through farming and animals in the city, Auroville is self-sufficient when it comes to things like dairy products and in-season produce.

The people of Auroville are each expected to make a monthly contribution to the city in exchange for receiving their basic needs. These contributions can be monetary, but they can also be made via work and other contributions that help to advance Auroville’s vision. People pay to be ‘stewards’ of the houses in which they live, utilities like healthcare and electricity are free, and schools encourage children to learn at their own pace and focus on their individual passions in their learning. Visitors, who can stay in guest houses or with hosts in the city, are asked to make a daily donation to help support Auroville, but instead of paying in any paper or coin currency, they are asked to request an Aurocard, which is like a debit card that only works in Auroville and which all residents have and use for their daily needs.

Many residents of Auroville are artists, who create their work in an atmosphere of peace, creativity, and community, but many are also scientists, doctors, farmers, and people from all walks of life. 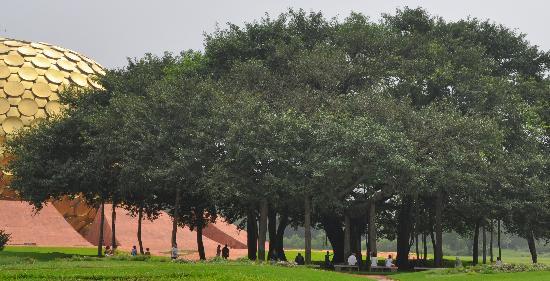 Auroville is not perfect by any means. Like any place, it has its share of struggle, controversy, and crime. It’s essentially a community founded by the flower-power hippies of the 1960s, and with that comes a level of idealism that often clashes with the real world. Questions of who controls the money that keeps the town going are often forefront in the minds of residents, most of whom pay mandatory ‘donations’ when they join the town and start a life there, and occasionally the problems of the outside world – problems like robbery, rape, and murder –  manifest themselves within Auroville’s supposedly paradisiacal borders.

But residents in Auroville hold to their belief in the place, a place which to many is an escape from the troubles of the world they lived in before. It’s a place where weirdos and misfits, dreamers and scholars, and anyone who wonders about their place in the world can find a home, and the beauty in that vision is what draws many people to Auroville. It’s not perfect, but it’s something different, something that tries to break free of the pressures that the rest of the world exerts. Like the massive banyan tree at the exact geographical center of the City of Dawn, Auroville is always growing, and always changing, constantly adjusting its own definition of what it means to be utopia.