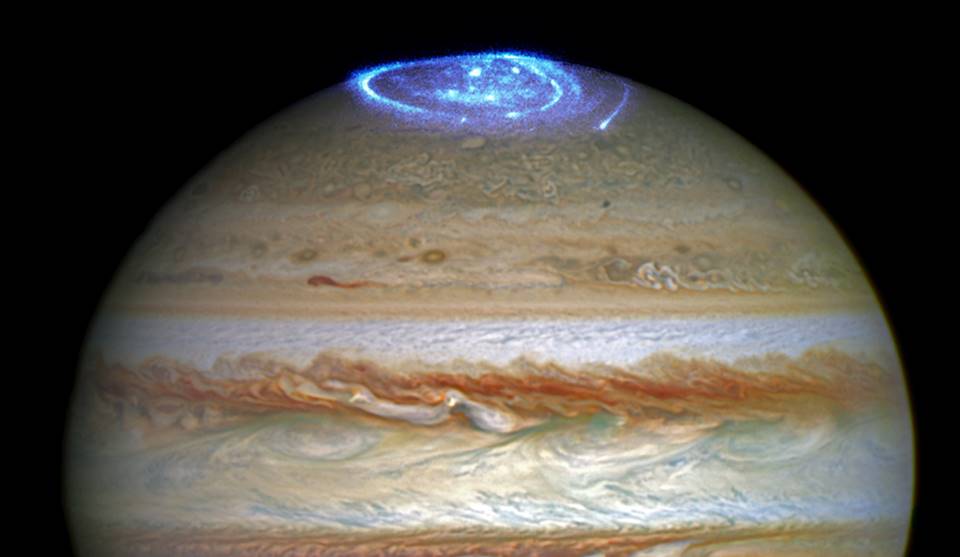 Jupiter’s Brilliant Auroras Are Some Of The Most Stunning Sights In The Solar System
Jupiter’s auroras are hundreds of times more energetic than those found on Earth.
Read More

The stunning colors, storms, and natural phenomena on Jupiter make it one of the most fascinating objects in the solar system. It’s by far the largest planet in the solar system and more than twice the size of as all others combined.

For some perspective, if the Earth was the size of a grape, Jupiter would be the size of a basketball. The planet is made up of mostly hydrogen and helium. If it has any hard surface at all, it would be a core about the size of the Earth.  But astronomers have yet to discover what’s at its center.

One of the most fascinating aspects of Jupiter is its Great Red Spot, a gigantic storm twice the size of Earth that’s been furiously churning for over a century.

In 2016, NASA’s Hubble telescope captured incredible images of the beautiful auroras on Jupiter’s north pole. Earth has auroras, most notably the aurora borealis, known as the northern lights, and aurora australis, or the southern lights.

However, Jupiter’s auroras are hundreds of times more energetic than those found on Earth. That’s because Jupiter’s gravitational field is so strong it pulls in charged particles from its surroundings. Some of these are particles thrown into orbit by its volcanic moon, Io.

Unlike the auroras on Earth, Jupiter’s seem to be never-ending and they are comprised of ultraviolet light, whereas the Earth’s are visible light.

NASA says the auroras occur when high-energy particles enter a planet’s atmosphere near its magnetic poles and collide with atoms of gas. This excites the atmospheric gas, causing it to glow.

The images of the auroras were captured just as NASA’s Juno probe arrived at Jupiter in 2016. The probe was launched in 2011 from Earth on a mission to measure Jupiter’s composition, gravity field, magnetic field, and polar magnetosphere. It’s also gathering evidence to learn how the planet originally formed.

“These auroras are very dramatic and among the most active I have ever seen,” Jonathan Nichols at the University of Leicester, UK, who is leading the work, said according to New Scientist. “It almost seems as if Jupiter is throwing a firework party for the imminent arrival of Juno.”

Unfortunately, if you were to fly in a ship to Jupiter you wouldn’t be able to see the auroras because they’re composed of ultraviolet light which isn’t visible to the human eye.

However, the Hubble telescope was still able to capture the beautiful blue halo at the north pole with incredible detail.

The Juno mission arrived at Jupiter just as the auroras were photographed by Hubble and, over the past four years, it has made some beautiful discoveries.

So far, the mission has been a success, giving researchers volumes of information about the planet’s interior, cloud patterns, weather, magnetic fields and more.

“We have already rewritten the textbooks on how Jupiter’s atmosphere works, and on the complexity and asymmetry of its magnetic field,” Scott Bolton, principal investigator for Juno, said in a statement.

“The second half should provide the detail that we can use to refine our understanding of the depth of Jupiter’s zonal winds, the generation of its magnetic field, and the structure and evolution of its interior,” he continued.