After suffering a traumatic injury to his cervical spine in a car accident on March 6, the first quadriplegic to be treated with stem cells has successfully responded to the treatment, substantially regaining functions of his upper body. In early April, under a joint collaboration between the Rancho Los Amigos National Rehabilitation Center and Keck Medicine of USC, 21-year-old Kristopher Boesen was injected with 10 million AST-OPC1 cells, a stem cell procedure developed by California-based biotech company Asterias Biotheraputics. The cells are created by being converted into oligodendrocyte progenitor cells (OPCs), or cells that exist in our spinal cord and our brain that are in charge of healthy nerve function.

In preclinical studies, the experimental therapy has been shown to reduce of the size of the injury, restore the protective “myelin” coating on nerve cells, produce factors that stimulate nerve cell growth, and recruit blood vessels to send oxygen and nutrients to the affected site.

Researchers also found significant improvements in walking function with AST-OPC1 being transplanted in both thoracic and cervical injuries.

Describing the treatment, chief medical director of Asterias and lead investigator of the study Dr. Edward Wirth explains that “at the 10 million cell level, we’re now in a dose range that is the human equivalent of where we were when we saw efficacy in pre-clinical studies.” As the team continues to evaluate safety first, Wirth explains that they are also now exploring how well they might assist in restoring movement in subjects. 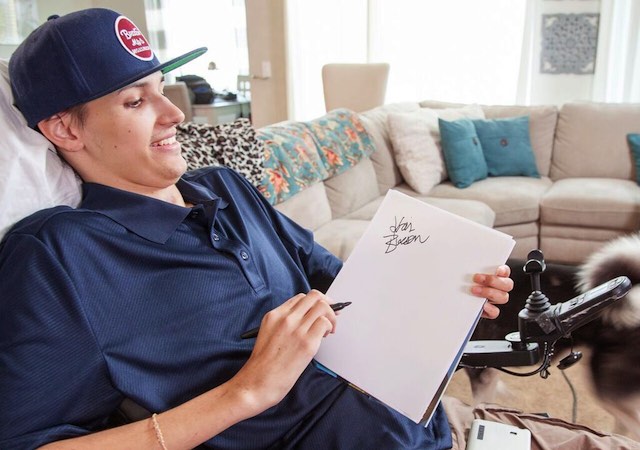 In order to be enrolled in the multi-center study, a subject must be between the age of 18 and 69 and be able to withstand an injection on the fourteenth and thirtieth days following treatment. Most importantly, Kristopher had to be able to breathe without a ventilator, in order to provide voice confirmation. The respiratory care team was able to wean him off the ventilator in five days, less than half the time it normally takes.

“So many things had to happen, and there were so many things that could have put up a roadblock,” said his father, Rodney Boeson. “The people at Keck Medical Center of USC and elsewhere moved heaven and earth to get things done. There was never a moment through all of this when we didn’t think our son was getting world class care.”

After 90 days post-treatment, Kris has recovered significant improvement in his motor function up to two spinal cord levels, enabling him to write, use his phone or even lift weights. “In Kris’ case, two spinal cord levels means the difference between using your hands to brush your teeth, operate a computer or do other things you wouldn’t otherwise be able to do, so having this level of functional independence cannot be overstated,” explains Dr. Charles Liu, M.D. director of the USC Neurorestoration Center.

Aside from spinal cord injury, the procedure can potentially treat a variety of neurodegenerative diseases, including multiple sclerosis and stroke, which are currently being assessed in preclinical studies.

“All I’ve wanted from the beginning was a fighting chance,” said Kris, who has a passion for fixing up and driving sports cars and was studying to become a life insurance broker at the time of the accident. “But if there’s a chance for me to walk again, then heck yeah! I want to do anything possible to do that.”