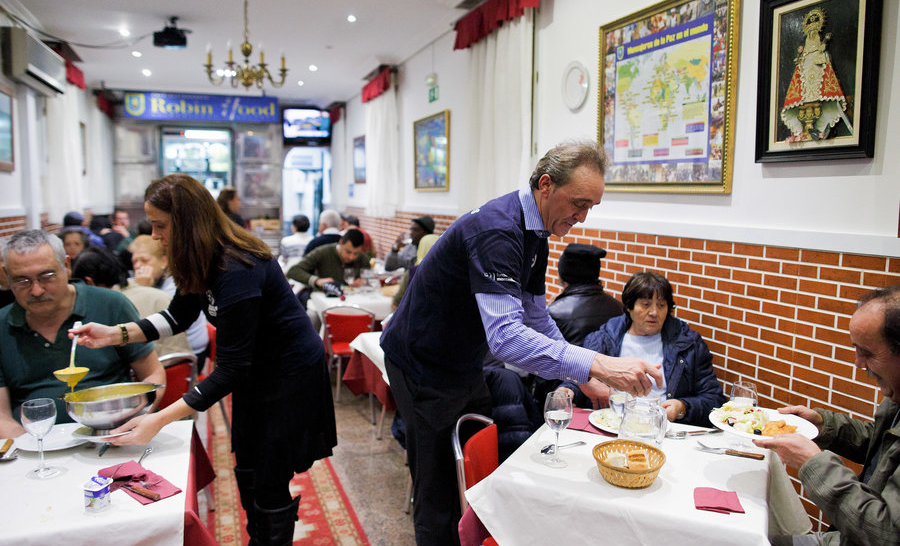 “Robin Hood Restaurant” Charges the Rich to Feed the Poor

“Robin Hood Restaurant” Charges the Rich to Feed the Poor
Move over Disney and Russell Crowe - there’s a new Robin Hood in town, and it is serving up a feast of altruism.
Read More

Move over Disney, step aside Sir Connery and Russell Crowe—there’s a new Robin Hood in town, and it is serving up a feast of altruism. The eponymous restaurant stands stalwart among the hustle and bustle of downtown Madrid, Spain. But unlike the character it is named after, this restaurant does not rob the rich with sword in hand nor merry men in tights. No, this restaurant nourishes both rich and poor with arms wide open.

By day, the Robin Hood Restaurant operates as other fine dining establishments. Peek your head in to find customers from far and near dining happily for breakfast and lunch. They sit at tables draped with luxurious red cloth. A centerpiece of freshly-cut flowers blossoms before them. Ornate chandeliers dangle and twinkle above.

The real magic of this restaurant is that each night, it transforms into a high-end soup kitchen. The hundreds of meals bought throughout the day provide enough money for the restaurant to serve a daily dinner to homeless people, free of charge.

Unemployment in Spain is around 20%. Many homeless people are in their situation due to harsh job cuts and are forced to live on the streets. The Robin Hood Restaurant welcomes more than 100 people off the streets to eat a nourishing meal each night. Peek your head in during dinner and you’ll see patrons sitting at the same place settings with fancy tablecloths and flower-filled vases. Glass goblets filled with water and wine. Real china plates filled with real food—never canned, never bought in bulk or heated in the microwave. The restaurant allows the patrons to drop their title of being “homeless” for a moment and enjoy the full flavors of being “human”. 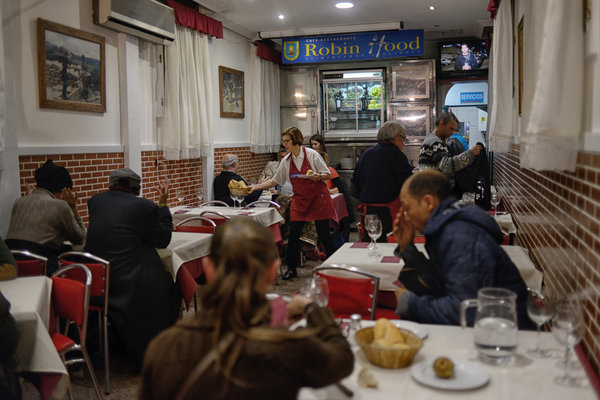 The Robin Hood Restaurant has four locations in Madrid, all run by 80-year-old Catholic priest, Ángel García Rodriguez (known amicably as Padre Ángel.) The generous man is also the founder of a local charity, Messengers of Peace, which employs around 4,000 people to run orphanages, addiction rehab centers, and nursing homes in Spain and abroad. 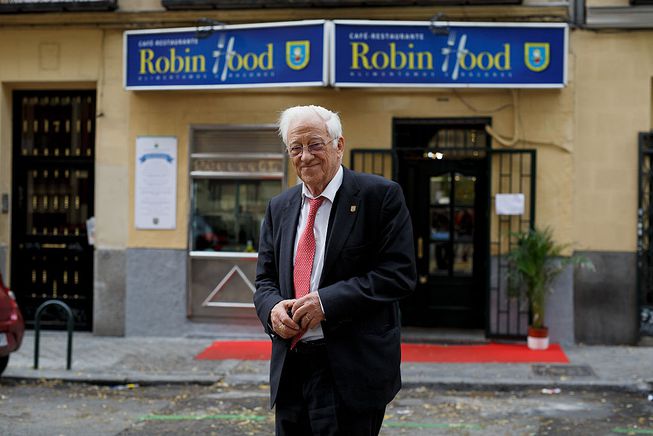 Ángel’s inspiration for the Robin Hood Restaurant came from Pope Frances, who speaks frequently about the importance of giving people dignity. Father Ángel told NPR, “I want [the homeless] to eat with the same dignity as any other customer and the same quality, with glasses made of crystal, not plastic, and in an atmosphere of friendship and conversation.” Ángel wants to instill dignity on a global scale, too. He has plans for 2017 to expand his restaurant brand overseas and open the first U.S. model in Miami, Florida.

The Robin Hood Restaurant’s mission is simple: to give willing customers a delicious meal, and use their money to feed those in need. But it’s not the first of its kind to take a “pay it forward” business approach. At Rosa’s Fresh Pizza in Philadelphia, generous customers have the option to give an extra dollar at the counter so a homeless member of the community can get a “free” slice—slices cost $1. Another business called FareStart goes a step further and not only feeds those living below the poverty line, they teach needy adults how to cook and assists in the cultivation of work experience and job prep, along with supporting their housing, childcare, and basic needs every step of the way. With 65 locations from California to Scotland, FareStart is training the poor to support themselves again—with the same dignity and same quality that inspired Padre Ángel.