San Diego Has an Unusual But Effective Way to House its Homeless Vets
Will other cities follow this successful model?
Read More

On any given night in the United States, around 40,000 homeless veterans are left without a roof over their heads. Homelessness is a global issue with a cycle that has proven difficult to break. However, the city of San Diego has a rolled out a new initiative that has achieved promising success rates, through an innovative approach to rehousing and stabilisation.

The initiative, called Housing Our Heroes, has seen 1,007 homeless veterans secure rental housing over the course of 17 months. San Diego Housing Commission President and CEO Rick Gentry explained that the homeless veteran population in San Diego is larger than anywhere else, due to the city’s focus on military. For this reason, tackling the issue of homelessness among veterans has become a top priority.

The initiative includes a housing-first program, which aims to get veterans off the streets, but with an approach that differs from other rehousing programs. Gentry, a government employee, maintains that “the private sector is typically more efficient [than the government].” So, rather than simply housing homeless veterans in government funded shelters, Gentry decided to use federal funds to take the job into the private sector.

By incentivizing landlords to take in homeless veterans, Gentry aimed to “reduce the risk of the private sector to deal with a customer base that might be off-putting because of some economic risk.” 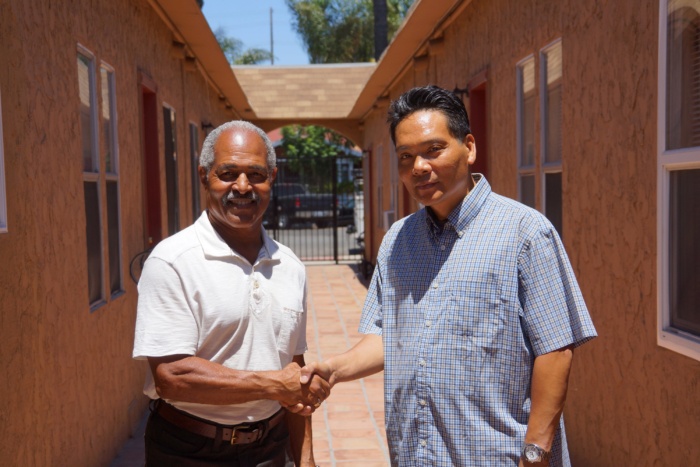 The San Diego Housing Commission paid landlords $500 for the first homeless veteran they housed, and $250 for each veteran after that. They also covered security deposits, utility deposits and other household necessities, like bed linen and kitchen utensils.

Jimmie Robinson is another landlord who has taken in seven homeless veterans through the Housing Our Heroes initiative. He says the incentives were “eye-catching,” but were not the greatest motive for taking in homeless veterans.

“When you get to meet them, the satisfaction of helping people turn their lives around was more important,” he explains. “When you see somebody rebuilding their lives, that’s what it’s become for me, more than than the incentives.”

He says the first veteran housed was a recently divorced, single mother of three who was living in her car. Veterans Community Services helped her return to her education and find work, which led to her moving out and becoming self sufficient. “Watching her go to school, get a promotion and become stabilized, that’s what got me more motivated about taking these people in,” Robinson says.

Mayor Kevin Faulconer, who has shown his support for the initiative since early 2016, says the incentive program has weighed heavily in its overall success. 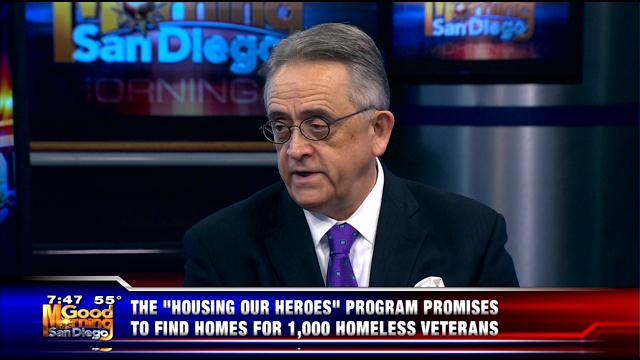 Gentry explains that with federal housing vouchers, non-homeless citizens usually have to wait 7 to 10 years to receive theirs, and are more likely use them immediately to move into a new home. They have often already found a landlord who is ready to accept them. He came to realize that the homeless were a different kind of customers, after noticing that their vouchers were not being used.

He used money from the initiative to hire housing navigators or what he calls “real estate agents for the homeless”. These people helped to build relationships with landlords, so they could be ready for when a housing voucher became available. Gentry described this move as ‘huge’, saying the program took off with these facilitators on board. 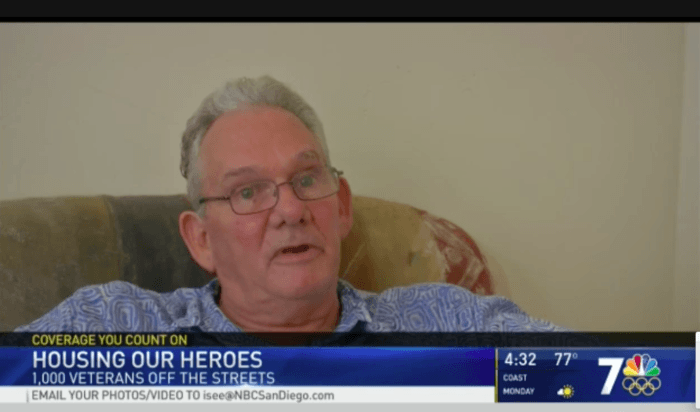 John Watson, a veteran who found a home through the Housing Our Heroes program.

Gentry insists that the program’s generous investment of funds into the private sector, which may seem wasteful, will in fact cost tax payers less in the long run. According to him, someone living on the street is more likely to burn up taxpayer money due to their need of registered medical services, police or more regular emergency assistance.

Gentry hopes that another 1,000 homeless people will be housed over the next 15 months by using the Housing Our Heroes Model, seeing potential for it to work just as successfully in other cities.

Mayor Faulconer maintains that there is still more work to do in San Diego. The Housing Our Heroes initiative is one of several steps the city has taken to assist their homeless population. For one, three large industrial tent structures that will shelter 250 homeless people each, will be installed by the end of the year. Faulconer and Gentry plan to continue their efforts with the Housing for Heroes initiative, and want to expand it to include non-veterans.