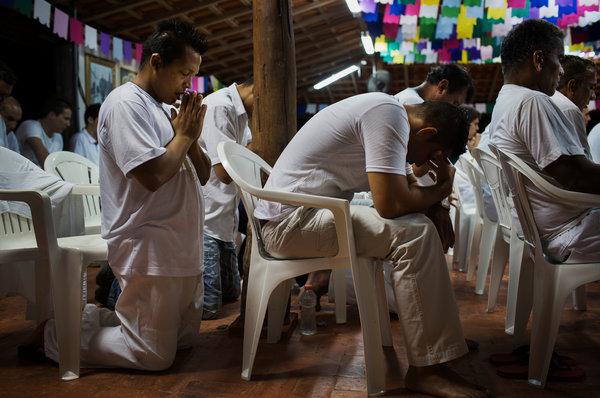 These Prisons Are Experimenting with Ayahuasca. Is it Working?

These Prisons Are Experimenting with Ayahuasca. Is it Working?
Brazil has one of the highest rates of homicide in the world, and its prison system includes over seven hundred thousand people in incarceration.
Read More

Brazil has one of the highest rates of intentional homicide in the world, and its prison system includes over seven hundred thousand people in incarceration. It’s a place where violent prison revolts are common, and where underfunding and overcrowding means that conditions often border on inhumane. When inmates are released from prison, many fall right back into a life of crime that soon lands them behind bars again, but one charity group in Brazil is doing their best to combat this trend, and they are doing it in a unique way: with the help of a traditional Amazonian psychedelic tea called ayahuasca.

Ayahuasca is a hallucinogenic tea made from the Banisteriopsis caapi vine and leaves from the Psychotria viridis shrub. These two plants are crushed and boiled in water for hours until they create a strong, bitter tea. When drunk, ayahuasca can cause vomiting and diarrhea, but it also induces a number of effects including hallucinations, incredibly vivid memories (especially those which may have been repressed), and heightened senses and emotions.

Although it is illegal in most parts of the world, including the US, in the Upper Amazon regions of South America, ayahuasca has been used for centuries in sacred rituals. There is a booming tourist trade in ayahuasca, and thousands of people travel to South America each year to take part in spiritual and shamanistic ceremonies involving the plant.

Ayahuasca is often referred to as a “teacher plant” because many people who drink the tea feel they have learned a lot about themselves and the world through their experience. People often describe incredibly vivid memories they had thought lost, or an extreme sense of connectedness with nature, and use those experiences to guide them going forward after the effects of the drug have worn off. Because it often forces people to confront repressed memories, some believe think ayahuasca has the potential to help those suffering from PTSD or depression. In Brazil, a group called ACUDA is using it to help rehabilitate criminals serving their sentences in Brazilian prisons. In Porto Velho, ACUDA – a charity organization – focuses its efforts on rehabilitating prisoners. They help inmates serving time for everything from theft to rape and murder to learn skills and trades like massage and motorcycle repair, in order to help them see that there is possibility for life after prison.

“Nobody can force someone to stop breaking the law,” said founder Luiz Carlos Marquez to Reuters. “It’s something each person has to decide on their own.”

Using this belief, ACUDA trains select prisoners, who are chosen from numerous prisons based on strict requirements of good behavior, in a variety of activities including yoga, gardening, ear candling therapy, Reiki, meditation, and furniture building. Some of these are skills and activities that inmates can use to help them get jobs when they leave prison, but others are taught as techniques for relaxation, self-awareness, and emotional control.

Euza Beloti, a psychologist with Acuda, told The New York Times, “We simply see inmates as human beings with the capacity to change.”

In 2013, ACUDA began experimenting with giving inmates ayahuasca. Once a month, 15 inmates take part in an ayahuasca ceremony, where the transformative properties of the drug allow prisoners to confront themselves, their crimes, their fears, and their futures. Prisoners who have taken part in the ceremony have reported that the tea gives them time to reflect on their actions of the past, or communicate spiritually with the victims of their crimes.

ACUDA hopes that the therapy they offer to inmates will help expand their moral consciousness and reduce the rate of recidivism back into the prison system after their eventual release.

Not everyone believes that what ACUDA is doing for prisoners is helpful, however. Many families of the inmates’ victims feel that their own lives have been torn apart, and protest the idea that the very people who inflicted such suffering should be allowed to enjoy recreational activities like yoga, pottery, and ayahuasca ceremonies.

Others worry about safety; ayahuasca has a particular tendency to be dangerous when used in conjunction with certain other drugs, especially stimulants like meth or cocaine. It also can have negative effects on people suffering from mental illnesses such as bipolar disorder or schizophrenia, and shouldn’t be used by people who are prescribed or taking any sort of anti-psychotic medication. The real question here is whether ayahuasca ceremonies are actually helping inmates. In other scenarios, ayahuasca has been used to treat PTSD in war veterans. The drug makes them confront their repressed and most-feared memories in a controlled environment, so the brain can reassess those emotions and memories without the same level of associated fear. The same principle applies when used with inmates.

Prisoner ayahuasca ceremonies include the dancing and loudly sung hymns of traditional ceremonies, but they also include a lot of inmates sitting stone faced in plastic chairs, deep in contemplation or outright crying.

“I know what I did was very cruel,” one inmate told The New York Times. “The tea helped me reflect on this fact, on the possibility that one day I can find redemption.”

While the use of psychedelic drugs is not something the United States is likely to adopt in its own prison system any time soon, the long term effects of its use in Brazil are something that psychologists, therapists, and politicians are going to want to keep an eye on.