Things that Happened After Charlottesville That Restored Our Faith in Humanity

Things that Happened After Charlottesville That Restored Our Faith in Humanity
A list of positive actions that have happened after August’s tragic events.
Read More

When tragedy hits, whether it’s a natural disaster or violent terrorism, we are speechless. In awe. In disgust. And yet, in the aftermath of the terrible death and destruction witnessed in Charlottesville this past weekend, we as a people have everything to give but silence. Three people lost their lives, fighting for freedom and equality. Among the politicians and leaders who responded in defiance to the “Unite the Right” white supremacy rally was Virginia Governor Terry McAuliffe. Referring to the bigots, he said, “You only made us stronger.” He went on to tell his fellow Virginians to “put [your anger] aside. Let us use hope. Let us use today to reach out to our fellow citizens. Let us show these people we are bigger them. We are stronger than them.”

Hearing these reminders of determination, seeing the strength of city residents hugging each other for the heart and soul of humanity, and feeling the unbreakable hold of hands clasped in solidarity have helped our country heal in the days following trauma and loss. Now is not the time to stop the conversation of race, religion, tolerance, and understanding. Now is not the time to stop using your voice to ask questions, to educate yourself, to speak up about what it’s like to live a day in your own shoes, to share an article with a friend or a foe, to make yourself be heard in the fight against hate.

We’ve made a list of other positive actions that have happened this week in light of last weekend’s tragic events:

1. Heather Heyer became an immediate heroine, inspiring peace and tolerance for all.

Heyer, 32, was one of the many peaceful protesters in Charlottesville this weekend to promote tolerance and denounce the hate of white nationalists when she was killed by a rampaging vehicle. To those who knew her, she is remembered for her great commitment to fighting for equality and her generous approach to life. 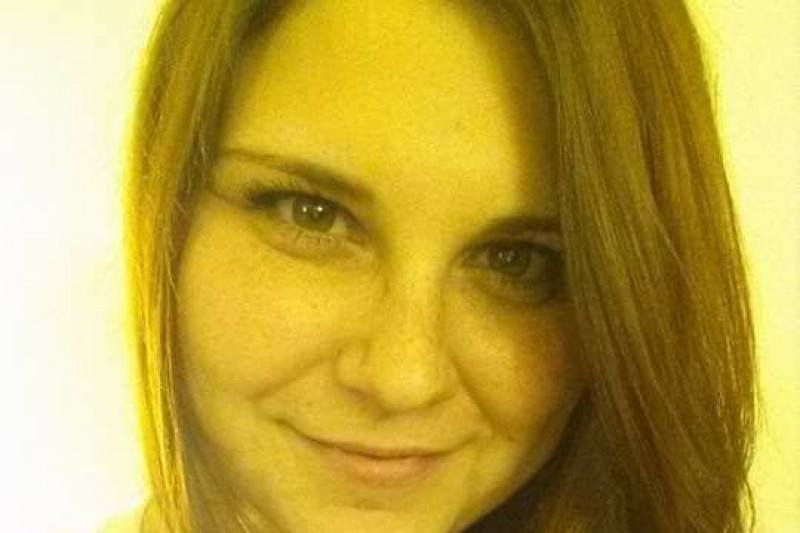 At her daughter’s memorial in Charlottesville this Wednesday, Susan Bro (Heyer’s mother) delivered a powerful eulogy. Her address was a true call to action, urging the audience, as well as people everywhere, to not let her daughter have died in vain. She added in response to the neo-nazi and white supremacist rally attendees that “they tried to shut [Heather] up. Well guess what? You just magnified her.” Heyer’s parents both spoke about how Heyer worked to “put down hate” up until her last breath. The internet came together in just under four days to donate over $200,000 to a GoFundMe campaign for the Heyer family. Now, it is time to get back out there and do what Heather would want us to do: to fight for love with as much compassion and courage as possible. 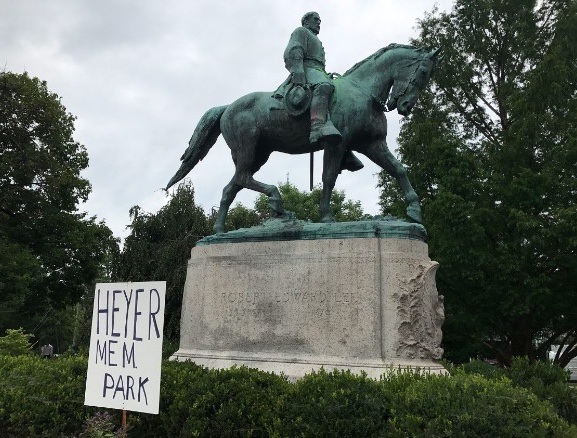 2. Hundreds of thousands of people around the world march in solidarity with Charlottesville this week.

More than 60 different activism groups around the world are hosting separate “Solidarity with Charlottesville” events. The map below was created by resistance group Indivisible, shared on Vox, and showcases a whopping 682 (and counting!) events slated to be held this week. Ben Wikler of MoveOn.org told Vox, “This is a moment when we need to demonstrate that we as a nation have the capacity to stand together in the face of hate. This attack is a reminder of the nation’s darkest heritage; the outpouring of solidarity following is a reminder of its best.” 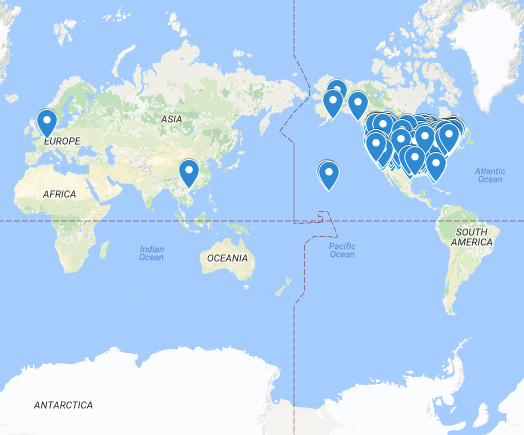 3. Global leaders have also publicly called out the Charlottesville tragedy for what it was: a march of racist violence and hate.

German Chancellor Angela Merkel described the scenes from Charlottesville as “absolutely repulsive.” Below are a few tweets from other foreign leaders: 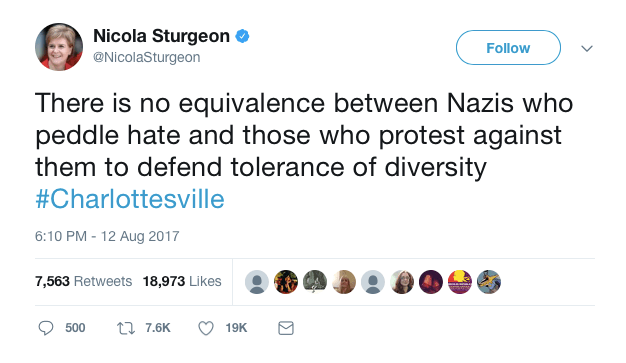 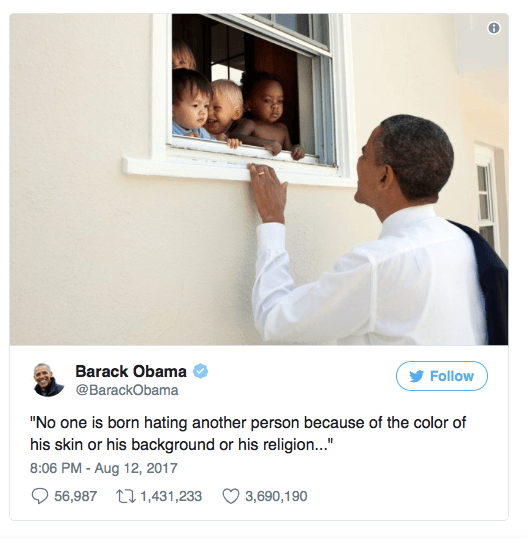 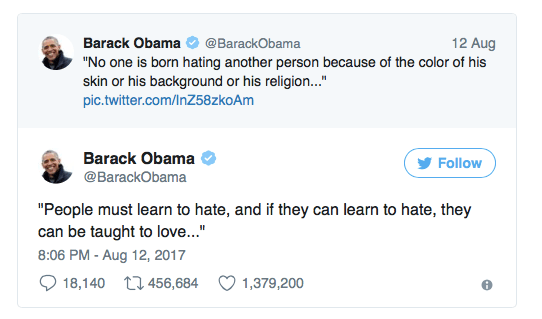 4. Social media, especially the Twitter handle @Yes, You’re a Racist, became a tool to identify the white supremacist perpetrators from the “Unite the Right” rally.

Using the widespread footage from Saturday’s events, people are tracking down members of the rally one face at a time. The Twitter page Yes, You’re a Racist, which has revealed white supremacist identities in the past, has begun posting photos from the “Unite the Right” rally with a simple message, “If you recognize any of the Nazis marching in #Charlottesville, send me their names/profiles and I’ll make them famous #GoodNightAltRight“. 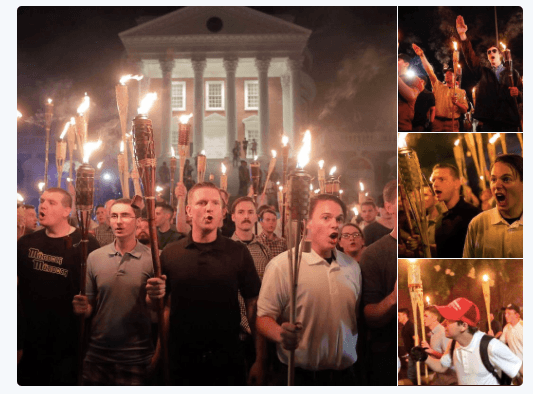 The account has already exposed a number of torch-bearing neo-Nazis and has published their names, addresses, and employers. For example, Cole White, the first person exposed on the account, was delivered a dose of crowdsourced justice and is now unemployed as a result of his rally affiliation.

5. Major internet companies are cutting their ties to KKK and hate-group affiliated material.

Think Twitter, Facebook, LinkedIn, Reddit, Spotify, Airbnb, all the sites you know and love are doing what they can to eliminate the avenues of hate lingering in their networks. For example, on Wednesday, Twitter suspended at least three accounts linked to Daily Stormer, the neo-Nazi website which helped organize the rally in Charlottesville. Facebook took down the rally’s event page. CEO Mark Zuckerberg told Reuters, “With the potential for more rallies, we’re watching the situation closely and will take down threats of physical harm.” Spotify Ltd has begun a major cleansing of its album library, removing musical artists from its streaming service that have been flagged as racist “hate bands” by the Southern Poverty Law Center. In the past, these businesses have received pressure from the government to eliminate violent propaganda tied to ISIS or other militant groups, but this is the first time that businesses have removed content based on a judgment of civil and social rights. 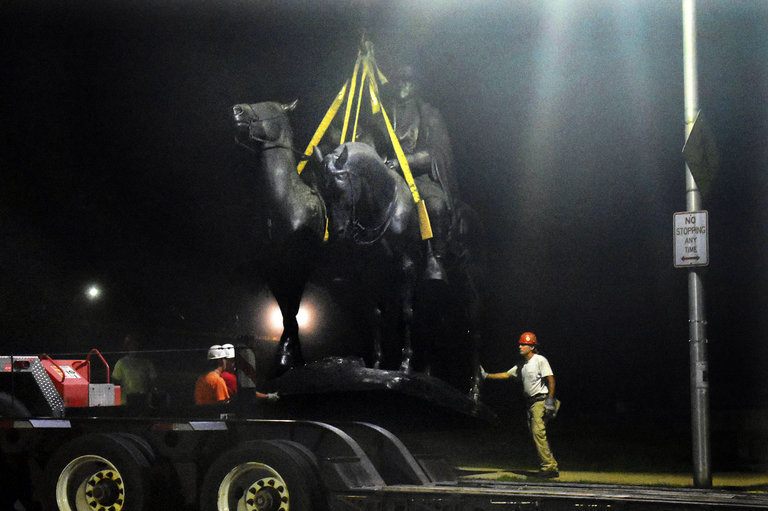 6. While the Internet is stopping hate one person at a time, U.S. cities are tackling hate one Confederate monument at a time.

According to the Southern Poverty Law Center, more than 1,500 monuments stand in communities like Charlottesville. Overnight, cities like Baltimore and LA are removing statues of Robert E. Lee and Stonewall Jackson with no public notice, no funding, and no permanent relocation for the extracted monuments. Baltimore mayor said, “With the climate of this nation, it’s very important that we move quickly and quietly.” The quicker these removals are done, the less time there is for opposition to germinate. You can find a sample template of a letter you can write to your local newspaper, your mayor, or your local member of Congress here.