Influencers Reveal the Truth Behind Perfect Instagram Posts – and It Feels Good
Finally, some influencers are speaking up about the negative implications social media can have on their viewers and society.
Read More

Everyone is guilty of that feeling when perusing social media; that strange mix of FOMO combined with jealousy and guilt when you view a stunning photo of that model, that social media “it girl”, or that celebrity. The guiltiest party causing this feeling is Instagram: for nearly eight years, Instagram has promoted the idea that the user can manipulate and edit photos for users to create a facade of the identity they want to portray on social media.

Numerous people have stepped forward to take a stand against social media and how it creates an unrealistic portrayal of users’ lives to create the extraordinary and sexy out of the plain and mundane. These individuals are giving a true voice to their followers and viewers and highlighting the several negative implications social media can have on the human psyche.

A Portland-based wedding photographer is the genius behind the account Socality Barbie that cleverly mocks the “live authentic” aesthetic with images of Barbie in wholesome and perfectly curated poses, poking fun at the care and attention those “casual” photos on Instagram actually appear. 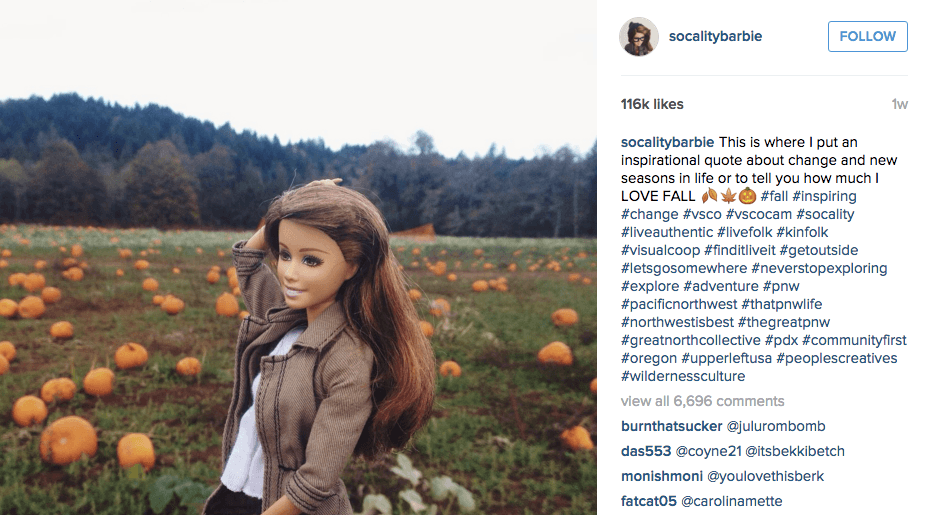 21-year-old Swedish model Tilda Lindstam who has walked for the likes of Alexander McQueen and Marc Jacobs has also taken a stand against unrealistic social media portrayal and has made a name for herself on Instagram, with her posts poking fun at the masquerade of the modeling world, regularly posting photos of herself with quippy captions: a closeup of her forehead pimple, posing in nude granny panties and even poking out of a taco. Tilda, unlike many other girls in her line of work, isn’t afraid to laugh at herself and show her flaws to the world, and it makes her all the more refreshing and captivating to follow – we are willing to bet all 310K followers on her account would agree. 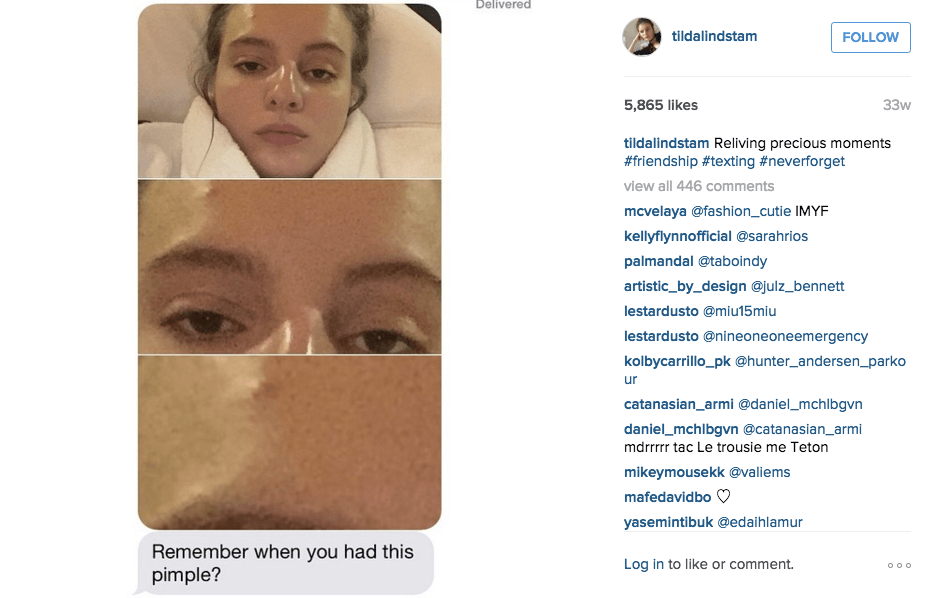 Halfway around the world in Bangkok, Thailand, photographer Chompoo Baritone’s photos went viral when she created a photo project that reveals the truth behind those shiny, perfect Instagram photos. Her photo project is a refreshing take on what users do to crop, filter and edit their photos – offering a deeper look into the surroundings on the picture-perfect photos that dominate your feed. 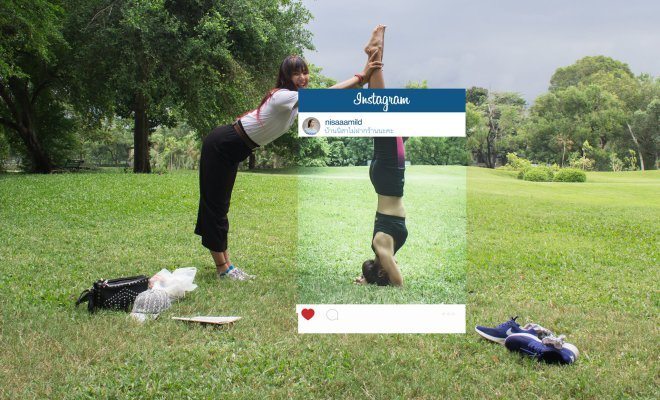 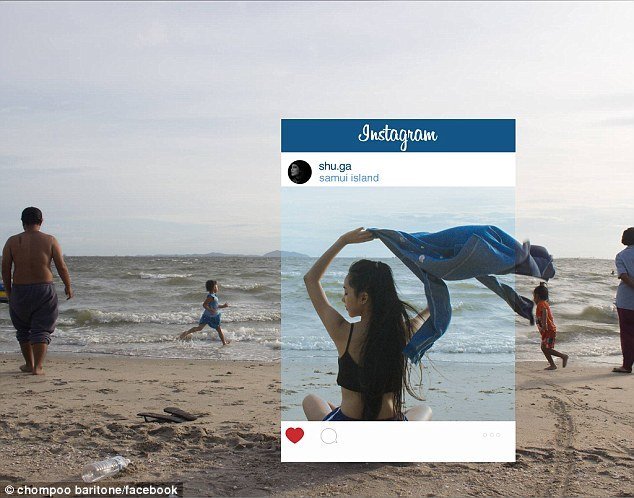 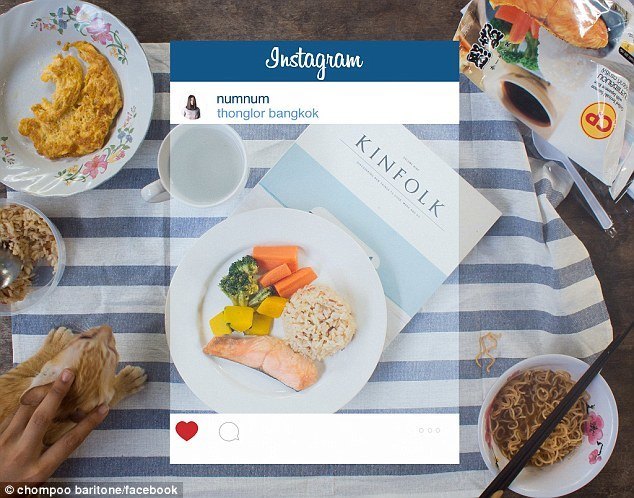 While there are several people who are able to look at the way we alter and manipulate our social media in a mocking, moreover positive light, there is a much more severe and negative effect that this false perception of perfection can have on our psyche.

18-year-old Essena O’Neill is an internet sensation and has been making thousands of dollars using her Instagram to model for clothing companies and brands and sharing her social media images for nearly 900K followers on Instagram. The Australian model decided to make a change, and turn her Instagram account on its head by deleted more than 2,000 photos she’s posted and re-captioning her Instagram, titling it “Social Media Isn’t Real Life” in protest of the negative implications it was causing in her life, and what she very quickly realized was causing in others. On November 4th, she even deleted her whole Instagram account. She also deleted several social media accounts and launched her website, Let’s Be Game Changers to empower others “use their voice for good and positive change on social media.”

Essena took to her Instagram to renounce her social media behavior and come to terms with her insecurities; how Instagram and other forms of social media had brought incredible stress to her life with the struggle of keeping up with the facade she had created. 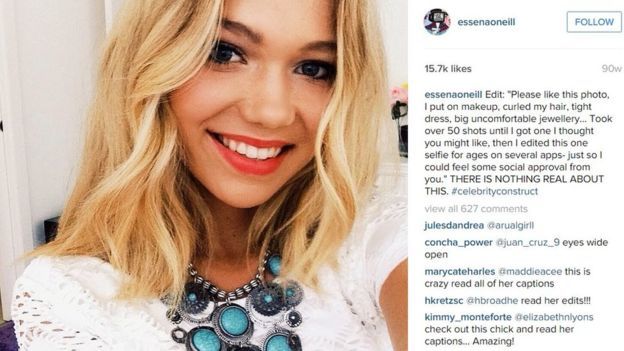 “Without realizing, I’ve spent the majority of my teenage life being addicted to social media, social approval, social status and my physical appearance. Social media, especially how I used it isn’t real. It’s a system based on social approval, likes, validation in views, success in followers. It’s perfectly orchestrated, self-absorbed judgment.”

Once terrified of how her actions would be received by the general public, O’Neill found strength in the majoritively positive response to her shift and responded in a video:

She added a message following her video: “When you stop comparing and viewing yourself against others, you start to see your own spark and individuality. Everyone has love, kindness, creativity, passion and purpose. Don’t let anyone sell you something different.”

Despite rising backlash to her dramatic shift, it sparks very important dialogue that has been a long time coming for the use of social media: how can we maintain healthy self-images when social media currency has become paramount to the validation that real face to face interactions bring? Time we took a step back from our social media selves and take a stand for authenticity.