Jack Conway was cutting turf out in the Irish countryside when he came across the massive 9-kilogram (20-pounds) butter ball that was buried 16 feet in the bog. Knowing it was of historical value, Conway took it to a museum where experts analyzed soil and foliage found on the object, and were able to estimate its age.

It’s definitely something one doesn’t expect to find buried in the swampy soil, but the really weird thing about it is that the butter is still theoretically edible. Andy Halpin, assistant keeper in the National Museum Irish Antiquities Division, warns it’s probably not the wisest idea to go slicing off a piece to spread on your toast though. After all, it breaks the five second rule by a quite a bit. 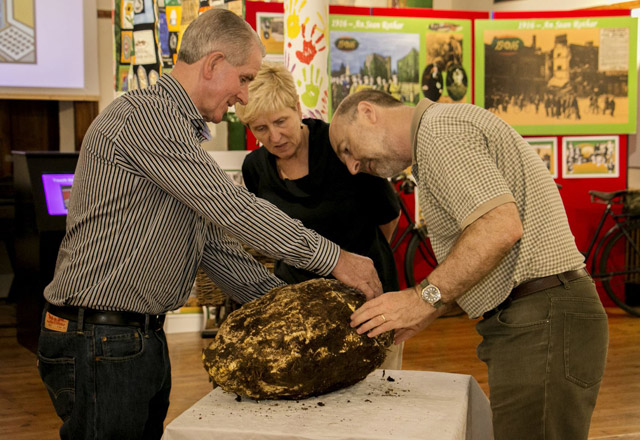 Despite the butter being in the earth for so long, it still smelled and felt like a dairy product – only covered in dirt. “There was a strong smell from my hands after touching and holding it,” said Savina Donohoe, curator of the Cavan County Museum, who examined the find.

As odd as the ancient dairy treasure might seem, it’s not all that unusual according to Donohoe. The butter was originally made from cow’s milk and it was common for people to bury it in the bogs to preserve it, so it could later be dug up. The bog’s low temperatures, low oxygen and highly acidic environments make it ideal for preserving dairy. Eventually, the damp environment will cause the butter to take on a paraffin wax-like consistency. In 2009, a 34-kilogram 3,000-year-old oak barrel of bog butter was found, and in 2013, a 45-kilogram 5,000-year-old chunk was unearthed.

“In early medieval Ireland butter was a luxury food often used as a means to pay taxes and rents,” reads a statement from the Cavan County Museum concerning the find. “It was sometimes used as a offering to the spirits and gods to keep people and their property safe — when used as offerings it would have been buried and never dug up again.”

What makes this creamy find different from previous similar ones is that the butter wasn’t buried in a barrel or crate of any kind. While it’s possible there wasn’t simply a barrel to store it in, Donohoe added that it could have been for religious reasons. “It may have been an offering to the gods,” she said.

Oh, and if you’re wondering what a slice of bog butter on your muffin might taste like, “funky” is a fitting description according to Ben Reade, head of Culinary Research and Development at Nordic Food Lab. The fat absorbs a considerable amount of flavor from its surroundings, gaining flavor notes which were described primarily as ‘animal’, ‘gamey’, ‘mossy’, ‘funky’, or ‘pungent’, notes Reade.

And if you’re looking to make a batch of your own bog butter, Reade has a very in-depth recipe for that as well. 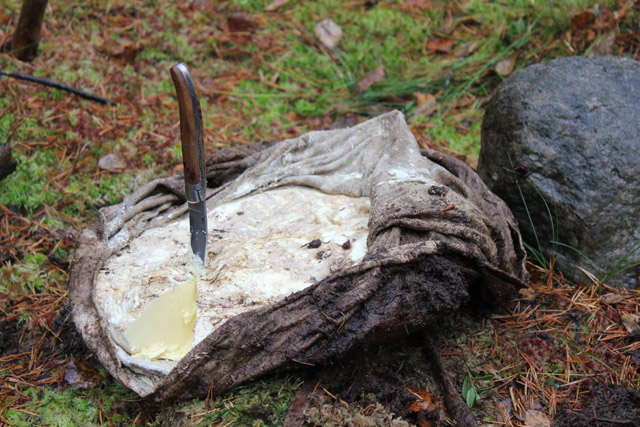