How This Acid Attack Survivor Became a Fashion Ambassador

How This Acid Attack Survivor Became a Fashion Ambassador
Laxmi Saa has taken advantage of her new status to also become one of India's biggest advocates against acid attacks.
Read More

In India, acid attacks are a notorious method for men seeking revenge against women who have rejected their marriage proposals and unwanted sexual advances. In 2014 alone, 309 acid attack cases were reported, but according to UK-based Acid Survivors Trust International, that number is likely closer to 1,000 per year, with some estimates nodding to 400 per month.

Acid sears the skin on contact, burning through tissue, leaving muscle and bone exposed. In severe cases, the bone dissolves. Many women lose their vision and/or speech, and scar permanently, leaving them disfigured and disabled, shunned by society and reliant on their families for the rest of their lives.

In 2013, the Supreme Court ruled that all states regulate the sale of substances like hydrochloric, sulfuric, and nitric acids – acids used in such attacks. Buyers must provide photo ID to the retailer, who is ‘required’ to register customer information. However, most retailers in India are not even aware of this ruling. These acids are still readily available in shops across the country – for a mere 30 cents. Many attacks go unreported and perpetrators oftentimes escape the 10-years-to-life sentence. Unless the government addresses the ease with which offenders can procure these chemicals and enforces more stringent punishment, these types of attacks will continue. In neighboring nations Bangladesh and Pakistan, acid assaults have decreased substantially due to stricter penalties, leaving people wondering why India can’t do the same.

In Agra, the city most well-known for the Taj Mahal, survivors have opened a cafe called Sheroes Hangout, an initiative of the Stop Acid Attacks campaign. The cafe has evolved as a gathering point for activism workshops, training, empowerment and outreach, providing attack survivors with a space for discussion and opportunity. 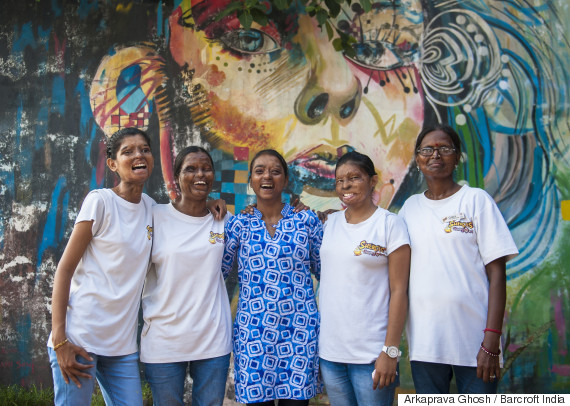 To aid in awareness and provide equal opportunity, Indian fashion company Viva N Diva has signed acid attack survivor and spokesperson Laxmi Saa as the new face of its brand. Laxmi was only 15 when a 32-year-old man attacked her with acid when she rejected his marriage proposal. Co-founder Rupesh Jhawar says that the idea for the campaign with Saa came after he saw a calendar featuring acid attack survivors. “For a moment I had seen beauty in a very different way and we wanted to capture it – remove any speck of being a victim from those eyes and give them a stage, an employment, a platform, a medium to flaunt it with style.”

Since the attack, Laxmi (who adopted the surname Saa, which stands for Stop Acid Attacks) has become one of India’s most outspoken advocates against the unregulated sale of acid, working to bring about social change and assistance to survivors through her non-profit organizations Chhanv Foundation, which runs the campaign. On being a survivor, Laxmi says, “Our life is not going to stop. Understanding the psyche of the criminal, I have realized, what they want is to make you live a life confined to closed spaces. But I have fought back and I urge every girl to fight for survival and come out strong.” 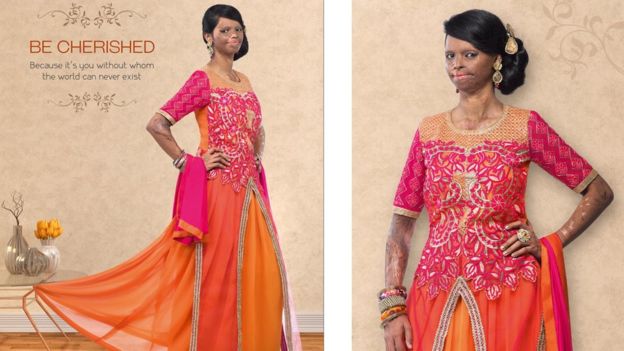 The “Faces of Courage” campaign is dedicated to those whose physical appearance has been shattered by tragic acid attacks with the goal of creating new opportunities for them.  As the face of a fashion brand, Laxmi now serves as the voice for all women whose lives have been affected by acid attacks, letting the world know that they will not lose their courage and spirit. A beautiful message that India – and the rest of the world – so critically needs to hear.