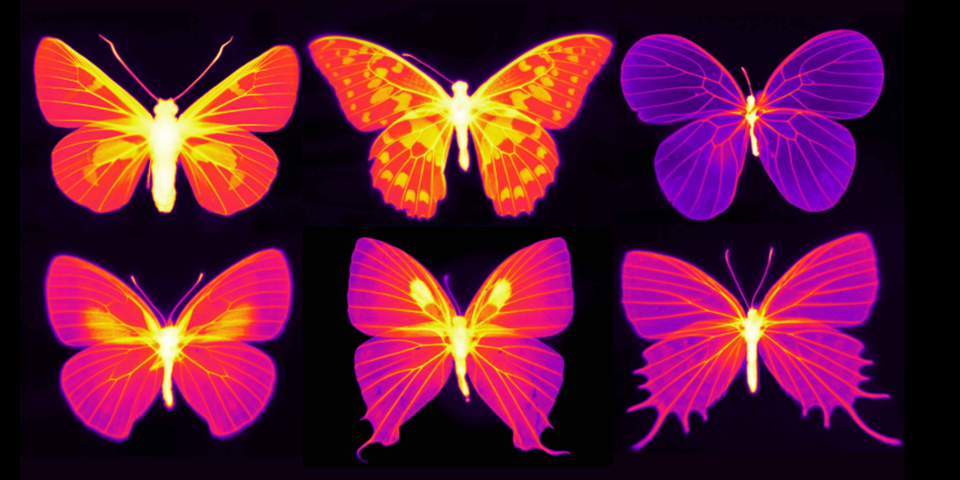 Luminous Infrared Images Show That Butterfly Wings Have Hearts
The fact that there’s a heart inside a butterfly’s beautiful wings makes them even more magnificent of a creature.
Read More

Butterfly wings have always been one of nature’s most beautiful creations. Like everything under the sun, they aren’t just pretty for the sake of being pretty, it’s all about survival.

Butterfly wings use patterns as warnings. The orange and black of a monarch appear to be poisonous to predators. Others have leaf-looking wings for perfect camouflage in trees and bushes. The spots on butterfly wings are designed to trick predators into thinking they are eyes so they attack from the wrong side.

For all their beauty, the common belief among researchers was that butterfly wings were made of sets of lifeless cells. But a recent study out of Harvard and Columbia using breakthrough infrared mapping technology suggests something completely different.

They are comprised of a network of living cells that work to regulate wing temperature for optimum performance and survival.

The main reason for this network of living cells is to regulate wing temperature. Inside the network, there is a wing heart that beats a few times a minute to help control blood flow.

The fact that there’s a heart inside a butterfly’s beautiful wings makes them even more magnificent of a creature.

“Most of the research on butterfly wings has focused on colors used in signaling between individuals,” says Naomi E. Pierce, Hessel Professor of Biology, and co-leader of the research team said according to Newswise.

“This work shows that we should reconceptualize the butterfly wing as a dynamic, living structure rather than as a relatively inert membrane,” she continued. “Patterns observed on the wing may also be shaped in important ways by the need to modulate temperatures of living parts of the wing.”

Researchers were able to gauge the butterflies’ ability to regulate their wing temperatures using a custom thermal camera. “This has been difficult to do until now because of the thinness and delicacy of butterfly wings,” Pierce says.

The researchers then painstakingly studied the temperature of each photograph, pixel by pixel.

Butterflies in the study showed a consistent wing-temperature threshold of near 104 °F. When the temperature of the wings approached the threshold, the butterflies would turn their wings away from the heat source.

They also found that the insects can use their wings to determine the direction and intensity of sunlight.

Butterflies are hyper-sensitive to the temperature and condition of their wings because they are the only set they’ll ever have and they do not heal.

If a butterfly’s wings get too cold, they cannot move them and they are unable to forage for food.

The study laid the groundwork for a better understanding of butterfly wings, but it may also lead to innovations in aviation.

“Each wing of a butterfly is equipped with a few dozen mechanical sensors that provide real-time feedback to enable complex flying patterns,” Nanfang Yu, associate professor of applied physics at Columbia Engineering and co-PI of the study, says according to Newswise.

“This is an inspiration for designing the wings of flying machines: perhaps wing design should not be solely based on considerations of flight dynamics, and wings designed as an integrated sensory-mechanical system could enable flying machines to perform better in complex aerodynamic conditions.”