This Man Thinks Mushrooms Can Fix the Environment and Take Down Monsanto
Paul Stamets has a secret weapon for fighting pesticide corporations - mushrooms.
Read More

Monsanto is one of the largest developers of genetically altered seeds and pesticides like Roundup. It pulls in around $16 billion a year and is under near constant criticism for its development of harmful chemicals. Mycologist Paul Stamets though has a secret weapon Monsanto doesn’t want us to know about: a natural, safe and perfectly effective way to kill insects.

Stamets has found a way to stop crop-destructive insects with a fungi that turns them into a sort of mummified insect. Like something out a science fiction movie, the entomopathogenic fungi (aka, fungi that destroys insects) doesn’t produce spores but uses the body of the insect to reproduce, and kills the insect in the process. Obviously, this isn’t good for the chemical pesticide business. “This is the most disruptive technology executives of the pesticide industry has ever witnessed,” said Stamets in a Ted Talk. 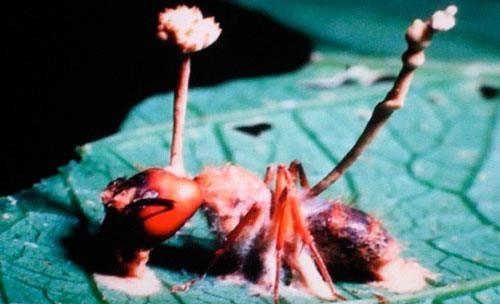 Monsanto, which has been called one of the most dangerous companies in the world has come under fire for almost everything – from privatizing water to destroying bee colonies in the U.S. – would likely prefer that Stamets’ patent dies a silent death. Stamets, who is an adviser to the Program for Integrative Medicine at the University of Arizona College of Medicine, has been a longtime advocate for the use of “smart pesticides”, and he’s well aware that he has an uphill battle.

”The biopesticide described in the patent reveals a near permanent, safe solution for over 200,000 species of insects and it all comes from a mushroom. After what is called ‘sporulation’ of a select entomopathogenic fungi (fungi that kill insects), the area becomes no longer suitable for any insect the fungi are coded for” explains Stamets.

The unwanted gifts from Monsanto that are regularly found in our soil and water are a strong sign that the company has little empathy for the well-being of the consumers. Thankfully, the consciousness of society is shifting little by little, and the beneficial use of Paul Stamets’ “magic mushrooms” is starting to be recognized.

Check out here Paul Stamets’ mind-blowing TEDtalk on 6 ways mushrooms can save the world: