First Ever Ocean Cleanup is About to Begin, and It’s a Big Deal

First Ever Ocean Cleanup is About to Begin, and It’s a Big Deal
The Great Pacific garbage patch is the largest area of accumulated ocean plastic on the planet, measuring three times the size of France.
Read More

The Great Pacific Garbage Patch is the largest area of accumulated ocean plastic on the planet, measuring 1.6 million square km or 617,700 square miles across – three times the size of France. Located at the midpoint between California and Hawaii, the North Pacific Subtropical Gyre has trapped over 1.8 trillion pieces of plastic in its current(s), which equals to 250 pieces for every person in the world. At this point, you may be wondering, how in the world do we begin to tackle such a massive environmental crisis?

Dutch inventor, Boyan Slat, and his organization, The Ocean Cleanup, have constructed a mile-long netted system which plans to collect up to 50% of the detritus floating on the ocean’s surface in the next five years. The project will embark on its initial journey to the Garbage Patch this July, taking off from San Francisco Bay.

A Project Six Years in the Making 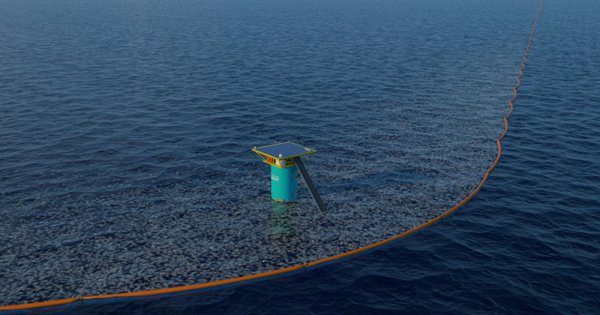 “People expect the garbage patch to be like an island, or islands, of trash floating in this big area,” says Joost Dubois, communications director of The Ocean Cleanup. “The plastic is still spread out quite a lot over this big area so there is a lot of material but it’s also a very large surface.” In an attempt to make plastic collection feasible over such a vast area, The Ocean Cleanup plans to install a connection of tubes resembling giant horseshoes to float on the ocean’s surface, powered by solar energy and the ocean’s current.

Here’s how Ocean Cleanup plans to work: The system is a network of huge floating nylon nets or “screens” held in place by black tubes as long as football fields to capture waste from within the water. What better way to fight the war on plastic than with plastic itself? The tubes are made of a durable plastic called HDPE, and are “flexible enough to bend with the waves, but rigid enough to retain its U-shape” barrier. Large anchors will help steady the giant horseshoe. Every six to eight weeks, boats will visit to collect the debris and take it all to shore to be recycled. 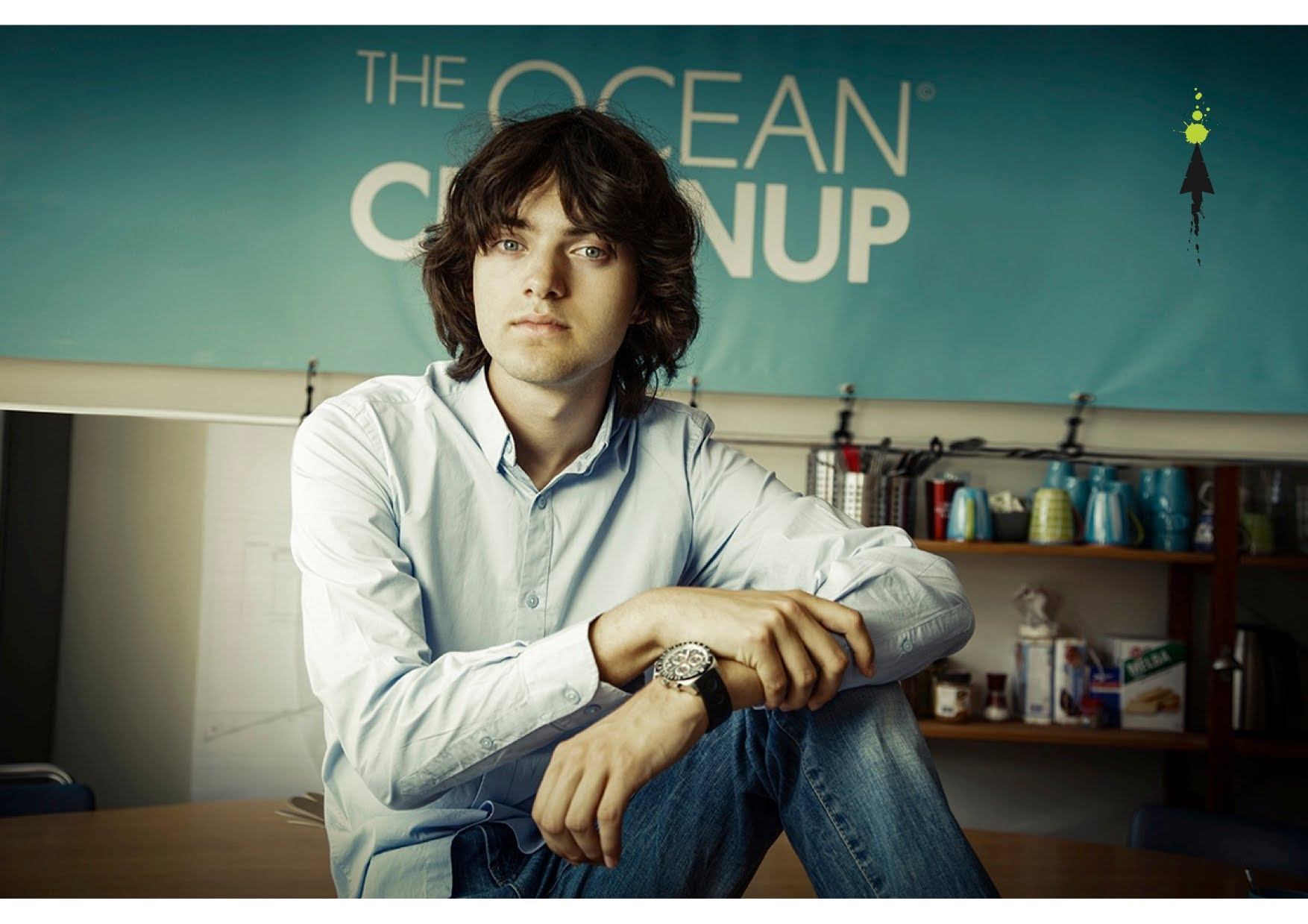 This ambitious project has been six years in the making. Dutch teen (now 23-year-old) Boyan Slat first presented the idea for the plastic-cleaning machine at a Ted Talk in 2012 after learning that to eliminate all the tiny particles of broken-down microplastics in the ocean could take nearly 80,000 years. Despite pushback from skeptical scientists, Slat dropped out of college at 18 to pursue a solution to clean up the ocean efficiently and economically.

He founded The Ocean Cleanup nonprofit in 2013 to create the plastic-catching technology. The organization raised $2.2 million from a crowdfunding campaign, including millions more from individual investors, such as Salesforce CEO Marc Benioff.

The majority of the Great Pacific Garbage Patch is made up of “ghost gear”: parts of abandoned and lost fishing gear, including nets, hooks, and ropes. Run-ins with ghost gear frequently result in drowned, strangled, and mutilated marine life, as well as damaged ecosystems, such as shallow coral reefs. 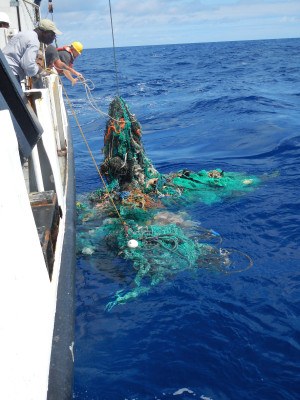 While 92% of the trash swirling in the patch are large scale objects or macroplastics (eg. crates, hangers, shoes, etc.), these objects condense into tiny microplastics over time, often too small for the human eye to see. Animals mistake these floating bits as food, which can lead to contamination, clogged digestive organs, and increased mortality rates.

Slat says, “Most of the plastic is still large, which means that in the next few decades if we don’t get it out, the amount of microplastics can be tenfold or 100-fold. It’s this problem that’s waiting out there to magnify many times unless we can take it out.” The organization expects to transport 11,000 pounds of garbage ashore per month, which will then be turned into recycled products, similar to Adidas‘ use of ocean material to transform plastic pollution into wearable (and attractive!) shoes. 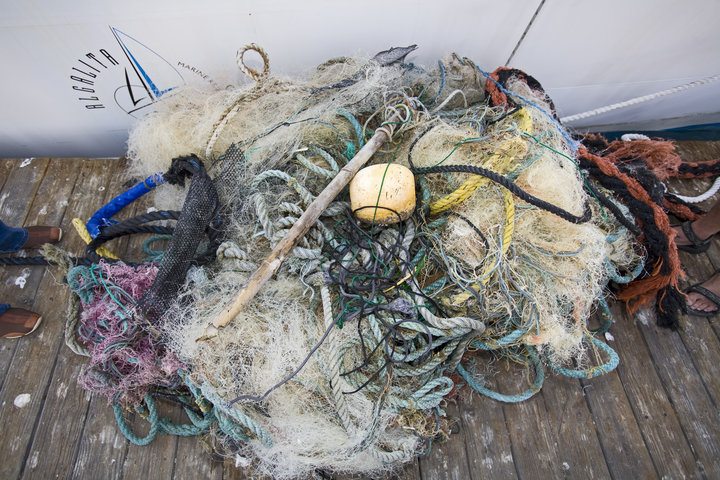 One Piece of a Complex Puzzle

Slat’s mission to reduce existing trash in the ocean is important, but is only one part of eliminating plastic pollution entirely. “Cleanups play an essential role in dealing with the symptoms of ocean plastics pollution, but they do not address the causes,” says Sander Defruyt, New Plastics Economy lead for the Ellen MacArthur Foundation, an organization which is working to create circular plastic economies.

Critics argue that in order to cut down on ocean plastic pollution, the overall flow of trash into the ocean must be stopped. To achieve this, manufacturers will need to reduce their use of plastic in the creation and packaging of their products, and humans must increase awareness of where they dispose their waste. Defruyt continues: “There is an urgent need to rethink the way we make, use, and reuse plastics. This will require innovators, industry, and governments to collaborate and develop solutions that prevent plastic from becoming waste in the first place.” Countries, such as France, are already banning the manufacturing of plastic utensils and dishware, and companies, such as Saltwater Brewery, are taking measures to eliminate plastic from their packaging.

However, laws can take years to come into fruition, and the plastic already damaging the ocean’s ecosystem cannot wait that long. “We created this mess,” Slat said in his 2012 Ted Talk, proposing we take responsibility for our actions and clean up the mess we’ve made. “[The Ocean Cleanup] will be one of the largest environmental rescue operations yet.”