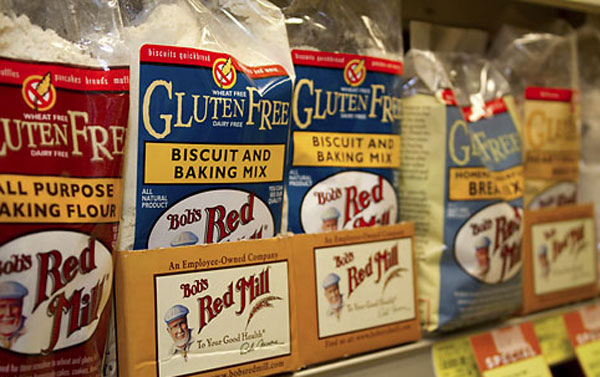 That may be a snarky way of saying it, but it is true in certain cases. Scientific studies have concluded that sensitivity to gluten for people who do not have Celiac disease may only be psychological.

It is especially relevant in a country where 17 million people may unnecessarily believe that they are gluten sensitive (source: A Mayo Clinic survey in 2012, cited in a NY Times article.)

It is especially shocking in a planet that spent $10.5 billion last year on gluten-free products (source: Mintel, a market research company, cited in the NY Times article.)

It is especially important because a psychological disease can spread as fast as any virus.

Finally, it is especially lucrative for all the food companies making tons of money off of people who are not really gluten sensitive.

The same scientist who gave strong proof for gluten sensitivity a few years ago now says it might only be in your head.

That is not a pretty list, and it’s hard not to feel any sympathy for those who suffer from these symptoms. But some people get these gluten-triggered symptoms without having Celiac; the term is non-Celiac gluten sensitivity (NCGS). But this condition is largely self-diagnosed. Professor and scientist Peter Gibson is no stranger when it comes to studying gluten; he did a study in 2011 that gave a lot of credit to the belief in (non-Celiac) gluten sensitivity. Seeing that NCGS had become a worldwide phenomenon, he revisited the topic in 2013 with a critical look at the original assumptions. These are the measures he took to validate his results:

The results were pretty shocking. They concluded that gluten couldn’t have caused any of the negative symptoms the subjects were suffering from.

NOCEBO might sound like the name of the latest trendy NYC neighborhood, but is actually a term used to denote an inert substance that creates harmful effects in a patient (opposite of placebo). Gluten was proven as a NOCEBO by the researchers of this medical study. People who did not take gluten but had thought they were, began to experience a list of symptoms that no one would wish his or her enemies. In the study’s own terms, “we found no evidence of specific or dose-dependent effects of gluten in patients with NCGS” (source: No effects of gluten in patients with self-reported non-Celiac gluten sensitivity.). Gibson then took the research one step further.

Gibson’s team became less interested in studying gluten itself and more interested in studying people who believed they were gluten-sensitive. He wanted to better understand adults who diagnosed themselves with this condition. According to its results, “GFD was self-initiated in 44% of respondents; in other respondents it was prescribed by alternative health professionals (21%), dietitians (19%), and general practitioners (16%).” If you have a friend with “gluten sensitivity,” there is a 44% chance they self-diagnosed. There is only a 16% chance that a gluten-free diet was recommended by a medical doctor.

Jessica Biesiekierski, a member of Gibson’s team, is focused on doing more experiments to prove whether or not non-Celiac gluten sensitivity truly exists. Gibson and Biesiekierski’s have said:

“Non-Celiac gluten sensitivity (NCGS), occurring in patients without Celiac disease yet whose gastrointestinal symptoms improve on a gluten-free diet (GFD), is largely a self-reported diagnosis and would appear to be very common.”

“There is definitely something going on,” Biesiekierski told RCS, “but true NCGS may only affect a very small number of people and may affect more extra-intestinal symptoms than first thought. This will only be confirmed with an understanding of its mechanism.”

Currently, Biesiekierski is focused on refining the experimental methods used to determine whether or not non-Celiac gluten sensitivity truly exists. In the meantime, the gluten-free movement keeps storming on, backed up by some celebrities:

@RealFloydCyrus everyone should try no gluten for a week! The change in your skin, physical and mental health is amazing! U won’t go back! — Miley Ray Cyrus (@MileyCyrus)

Just how big could this be?

Marketers are milking consumers and treating this trend like it will never go away. Just look at the numbers… (the following surveys and marketing studies were originally cited in this NY Times article about the non-gluten big bucks.) A fast growing trend: 11% of all households purchased gluten-free foods in 2013. They were 5% in 2010 (source: Nielsen Survey). These household customers ring up as much as $100 of gluten-free products in their average grocery basket. This is 3 times more than the average grocery bill of $33 (source: Catalina Marketing). Annual sales of gluten-free products were estimated to be $10.5 billion in 2013 and are expected to be $15 billion by 2016 (source: Mintel). To quote Harry Balzer, VP of market research at NPD Group: “About 30 percent of the public says it would like to cut back on the amount of gluten it’s eating, and if you find 30 percent of the public doing anything, you’ll find a lot of marketers right there, too.” Here is the craziest part of all – a 2012 Mayo Clinic survey concluded that only 1.8 million Americans have Celiac disease. In the same time, it’s actually 18 million people who consider themselves “gluten sensitive”, participating in the increase of this explosive trend.

The chart below shows the volume of Google searches with the keywords: organic, gluten, GMO and antioxidant. All of these health trends have made it onto the labels of tens of thousands of products you find at the grocery store:

People care more about gluten than about antioxidant rich and non-GMO products. Gluten is a very specific protein affecting 0.6% of the American population that actually has Celiac disease, whereas 5.7% of the population believes to be gluten-sensitive. It has recently become more interesting for people than organic food, something on the contrary relevant to just about 100% of the population. According to the Google search volume, the only over-diagnosed illness that tops the gluten-free craze is ADHD.

If you want to find out more about how to get tested:

* This article was updated on September 23 2014 in response to the complaint(s) that we did not provide enough detail within the original.
** The opinions expressed are those of the author. Buzzworthy is more than happy to post a counter opinion if reliable sources and a strong case are provided.