This Teenager Created a 3D-Printed Prosthetic Arm for His Veteran Dad
“I want to create things that can help people change their lives. And I want to do that through engineering.”
Read More

Robbie Frei, just 18, recently 3D-printed two prosthetic arms—one that can play video games, and another that can throw a baseball.

The first model is an adapter for the Nintendo Switch. Robbie created it for his father, Jason Frei, who lost his right arm in a rocket-propelled grenade incident during the Iraq War. The adapter piece straps onto Frei’s left arm so that he can control everything with one hand. This is the first time since his accident that Frei can play video games.

“Now he has this other part of his life that he can enjoy with us,” Robbie told BBC. 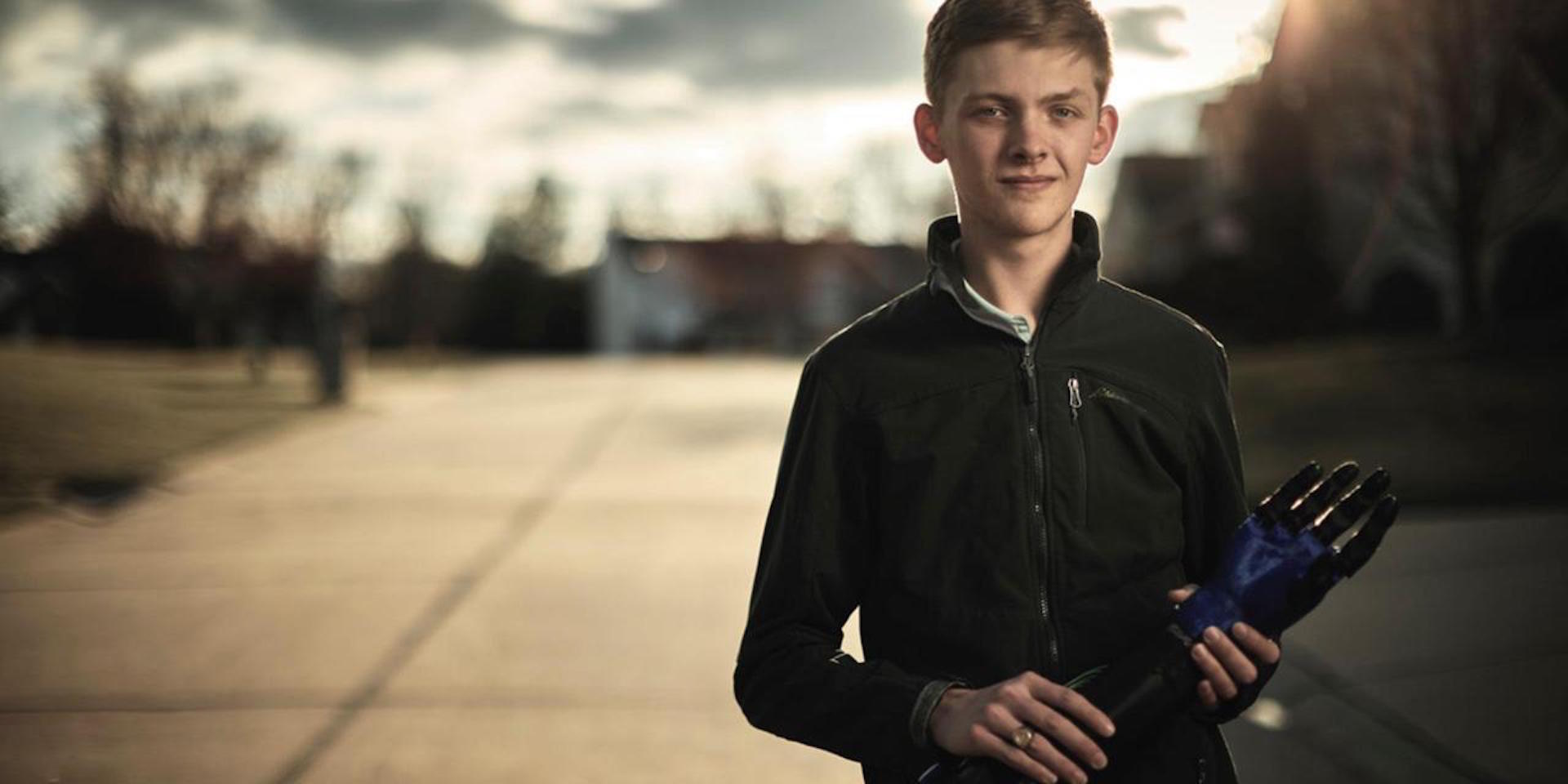 Robbie is a senior at Priory High School, a private Catholic school in St. Louis, MO. Priory. He is known for its AP courses, high SAT scores, and its student involvement. Other students have attended noteworthy events like the North American Computational Linguistics Olympiad, the Nothing But Nets Leadership Summit, and St. Louis University’s Adventures in Medicine and Science Program.

Robbie’s second prosthetic project is more complex than the first. It’s a completely mobile arm with a hand, fingers, wrist and forearm. To create it, Robbie first took a video of himself throwing a baseball, and broke down his movements into parts. He measured and modeled each arm part on the computer, then used his school’s 3D-printer to produce the components.

The prosthetic arm is Robbie’s senior thesis project—a Priory graduation requirement that entails writing a paper or creating a visual. The innovation not only lets Robbie graduate, but also allows his dad to throw a baseball for the first time in 15 years. 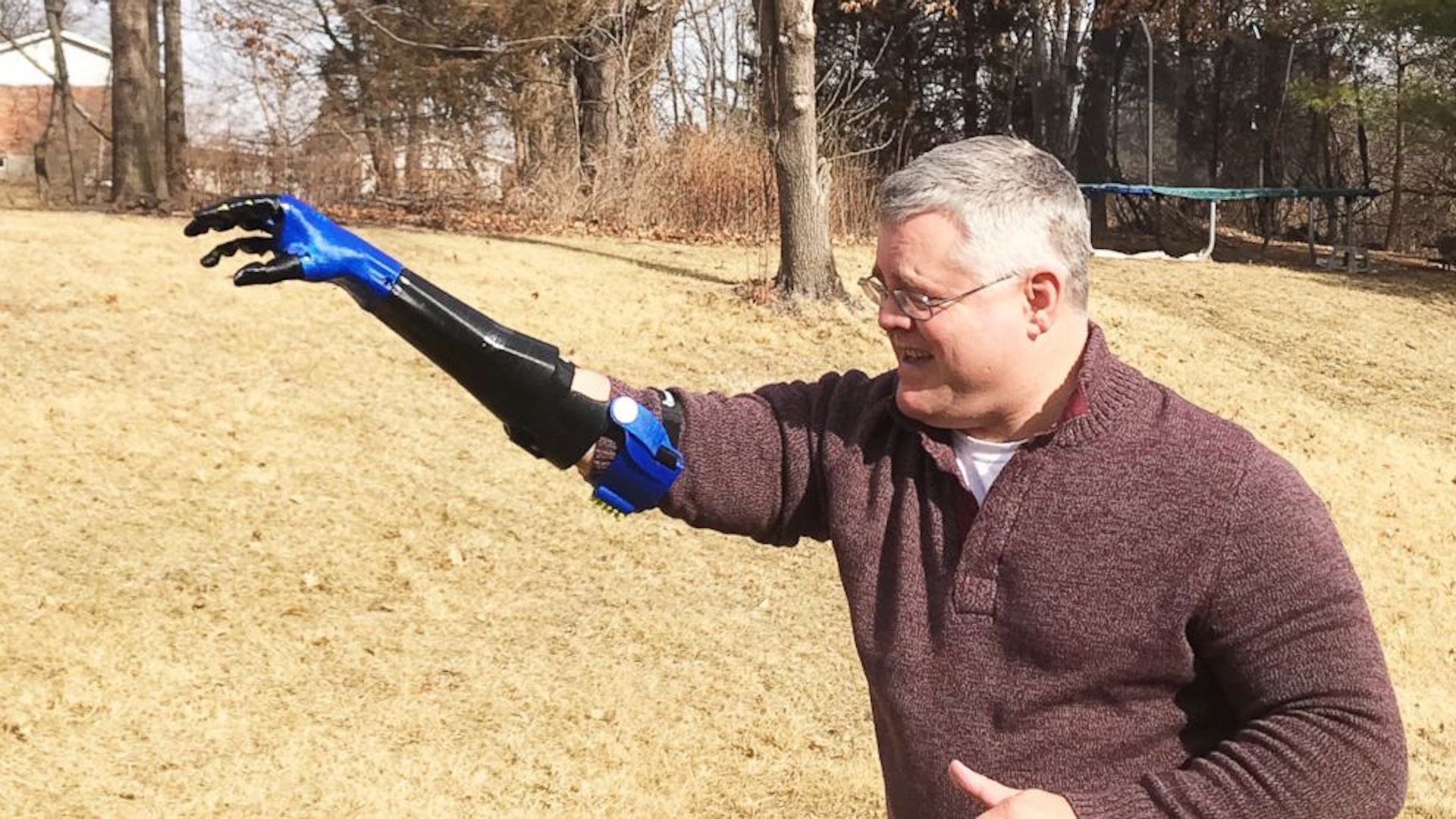 Robbie has been interested in engineering since he was in 7th grade, and spent 6 years on the school district robotics team, the RoboRebels.

Robbie credits his skills to his love of math and science. His passion for these subjects helps him think logically and produce successful innovations like the prosthetic arms.

“He knows how to get projects done and come up with amazing things,” said Derek Ward, who runs the RoboRebels.

The goal of the RoboRebels, which has 70 male and female members, is to “cultivate interest, understanding, and skill in the fields of science, technology, engineering, art and business.” RoboRebels, established in 2004, participates in competitions throughout the Midwest. Though the RoboRebels haven’t been so successful this year, they won excellence awards in controls and engineering in 2013 and 2015. 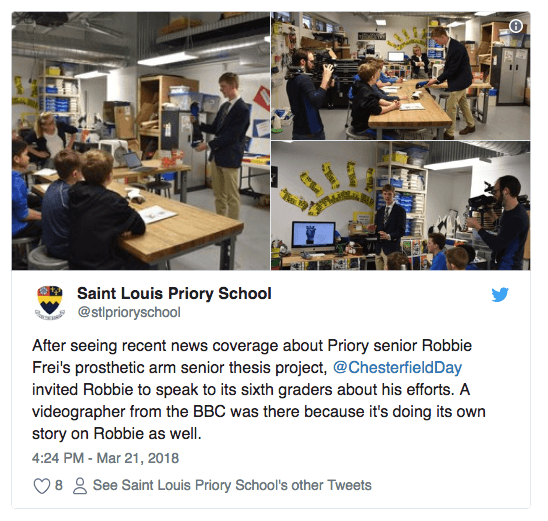 Robbie may not have earned a robotics trophy this year, but he should sure be proud of his senior project. He has already spoken about his project at local elementary schools, and made his design template available for the public to download.

You can view the template online, and can even create your own prosthetic arm if you have the resources. The template has already received almost 100 downloads.

Robbie is pleased with these results, but wants to improve certain aspects of the arm like the thumb and wrist so his dad can throw a baseball more precisely.

He will graduate from Priory this spring, and then plans to attend engineering school.

“I want to create things that can help people change their lives and make them better. And I want to do that through engineering,” he said.