“ICU Grandpa” Gives Love to Premature Babies When Parents Can’t
The “ICU Grandpa” is the dose of good news we all need.
Read More

Baby Logan was born three whole months early. Determined severely premature, he has been in the hospital’s ICU for six weeks. While Logan’s mother wishes she could be there day and night for him, she cannot as she has an older daughter who also needs to be taken care of at home. Every morning, Logan’s mother drives two hours to the Children’s Healthcare of Atlanta, feeling anxious that her baby has been “missing his mommy.”

On one particular morning, she saw that her baby was in good hands – the tenderly caring hands of David Deutchman, a legendary hospital volunteer whom hospital staff and families have now nicknamed the “ICU Grandpa.” 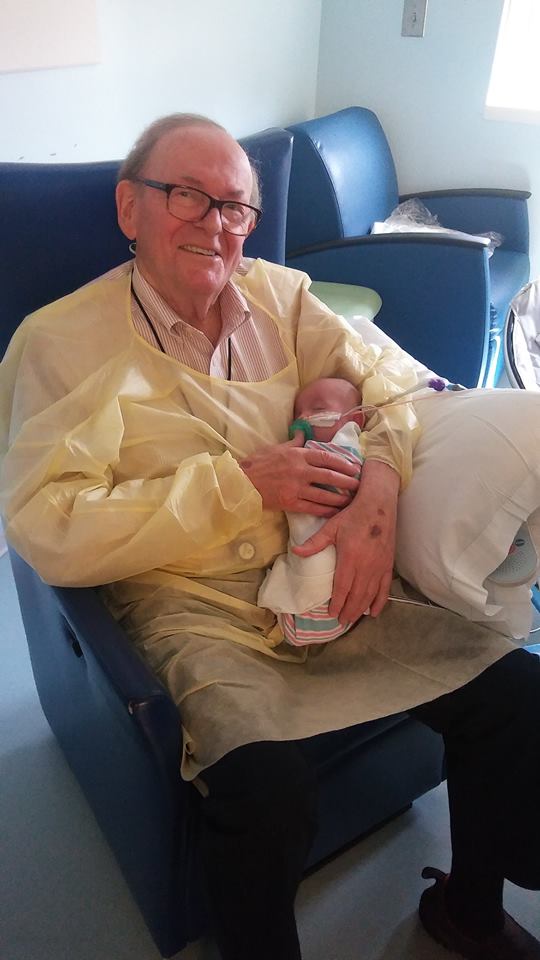 It’s really no wonder that the photo above, which features Deutchman holding a slumbering baby Logan, went viral on Facebook, with over 245,000 likes and 66,000 shares. Twice a week for the past twelve years, this man has held, comforted, and sung to the tiniest babies, many of whom often have to spend weeks or months in the hospital.

Busy hospital staff can’t give more than a few passing moments of love to the little patients. Many of the parents have other children at home that need to be cared for, and some live so far away from the hospital that it is difficult for the families to make frequent trips.

Luckily, there’s Deutchman, who retired from his marketing executive position to become an executive baby whisperer. Upon arriving for his visit, Deutchman dons his volunteer name badge and a protective gown for hygiene. He sits down in a comfy chair and waits for the nurses to bring him one baby after another to hold and to love. Sounds like the best job ever, right?

The children’s parents are so thankful for Deutchman’s service, as their comments on Baby Logan’s Facebook post prove. What a relief it is just knowing that someone is there to make their baby feel safe. But Deutchman doesn’t just volunteer for the parents’ sake. He does it for the babies, and according to psychological studies, what he does really has an impact.

In a 2013 UK study, researchers found that “loving touches – characterized by a slow caress or gentle stroking – increases the brain’s ability to construct a sense of body ownership and plays a big part in creating and sustaining a healthy sense of self.”

A nurse at Children’s Healthcare of Atlanta, Elizabeth Mittiga, confirms that Deutchman’s care has helped countless children “grow faster and put more weight on. We treasure him.”

And a treasure he is indeed. Deutchman explains his own friends’ puzzled reactions to his volunteer work. He says, “They ask me what I do here. And I tell them, ‘Well, I hold babies. Sometimes I get puked on, I get peed on, it’s great.’ And they say, ‘Why would you do that?’ They just don’t get it. The kind of reward you could get from holding a baby like this.”