This Man Befriends KKK Members and Convinces Them to Leave the Group
A story even more relevant to read after what happened in Charlottesville.
Read More

Daryl Davis is an electrifying musician. The accomplished blues piano player has performed with rock n’ roll icons like Chuck Berry and Jerry Lee Lewis. These days though, Davis is also known for associating with a group of men who most black men would want nothing to do with.

Davis has slowly been befriending members of the KKK in an effort to understand their racist views, and possibly steer them away from its hateful rhetoric. He never planned to try his hand at converting members; it just sort of happened one day by chance. It was after a 1983 gig in Frederick, Maryland; Davis told The Atlantic that he was approached by a member of the audience who complemented him on his playing. The two men got to talk, and the man eventually admitted it was the first time he’d had a drink with a black man. Surprised, Davis asked why and the man replied “I’m a member of the Ku Klux Klan.” The man showed Davis his membership card, and asked him to give him a call next time he was playing in town.

Because of that encounter and the encounters that followed, Davis has convinced almost 200 KKK members to renounce their membership from the group. “I never set out to convert anyone in the Klan,” he told The Independent. “I just set out to get an answer to my question: How can you hate me when you don’t even know me? I simply gave them a chance to get to know me and treat them the way I want to be treated. They come to their own conclusion that this ideology is no longer for them.” 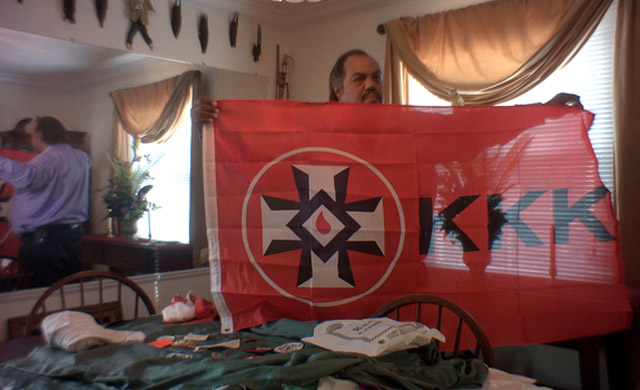 Not surprisingly, both Davis’ white and black friends thought he was nuts when he told them he wanted to start getting to know Klan members. To them, these were people that were to be reviled and held in contempt for their oppressive views. To Davis though, the Klan is as “American as apple pie and baseball”, and to try to truly understand it could only be a good thing. “Not everybody in the Klan is going to be my friend,” Davis told Fusion. There are people who will go to their grave being hateful, violent and racist. They’re not going to change, but then there are those with the same sentiment who take the opportunity to sit down [with me].”

Davis is no stranger to the racism many black men face in the United States, and says he first realized the prejudice marching with his Boy Scout troop in 1968 – he was the only black kid – when people began to hurl rocks and insults. “These people must not like the Boy Scouts,” Davis said he thought to himself.

As for the KKK member who sat down and had a drink with Davis after the show, Davis took the man’s card and later paid him an unannounced visit at his house. He learned that the man had actually been booted out of the KKK for blowing the group’s funds on wrestling tickets, but was able to get the phone number of Roger Kelly, the then Grand Dragon. Davis was warned that if he visited Kelly’s house he’d end up dead, but he didn’t and the two men actually kept in touch.

Kelly would eventually become the Imperial Wizard of the Klan, before quitting and turning his robe over to Davis.

Davis’ actions don’t come without criticism from members of the black community. “I had one guy from an NAACP branch chew me up one side and down the other, saying, ‘you know, we’ve worked hard to get ten steps forward. Here you are sitting down with the enemy having dinner, you’re putting us twenty steps back.'” He’s been called an Uncle Tom and Oreo, but says it doesn’t bother him and simply turns to his bullies, asking “How many robes have YOU collected?”. That typically shuts them up.

While unusual, the logic behind Davis’ mission dispels any queries. “If you spend five minutes with your arch enemy, you will find that you have something in common with him or her,” he says. “And if you spend 10 minutes, you’ll find you have something else in common. The more you build upon the things you have in common, the things you have in contrast like skin color begin to matter less and less.”

For more information about Davis, you can check out the trailer of the documentary centered on his mission below: