Body Hacking: Futuristic, Creepy and Totally Unregulated
Body hackers view themselves as pioneers in the evolutionary step of man and machine becoming one.
Read More

A man walks into a large room and finds his place in line behind others waiting for their turn. When he arrives at the table, he sits down while a man in everyday clothes swabs his hand with alcohol and prepares a syringe. The needle is stabbed into his skin and it’s over – he’s now part cyborg.

This scenario isn’t out of some sci-fi movie, but a common occurrence at events circled around the body hacking movement. Body hackers or biohackers, are people who have modified their body with technology, fusing their flesh with machines and microchips. It might seem bizarre or even disturbing, but for those who partake in the controversial practice, they view themselves as pioneers in the evolutionary step of man and machine becoming one.

For one, nearly all of the body hacking is done not by any sort of licensed body hacking medical professional, but by the body hackers themselves. At last year’s Body Hax Con in Austin, body hackers like A.J. Butt lined up to have a microchip no bigger than a grain of rice inserted into his hand. The RFID chip contained encrypted information that can be used to unlock the user’s smartphone. The chip was implanted by Amal Graafstra, another body hacker who had designed the chip and set up his table at the conference where a steady line of people waited their turn. For some attendees like Sasha Rose, who sat nearby at a meditation booth, the amount of people lining up for the casual procedure was shocking.

“More than the crazy concept, it’s actually people’s willingness to accept it. That’s why it’s crazy to me,” Rose said. “People are just willing to just line up and go: yeah, stick that in me.”

Graafstra admits that body hackers see the world a little differently than most people and to him, it’s about having the option of making his body look like the Terminator. “A patient may someday come very soon and say: my eye is totally fine, but I want an eye that can see infrared. And I want an eye that can zoom,” Graafstra said.

The trend has developed such a growing cult following that biohacking parties are springing up across the globe. Around two years ago, Hannes Sjöblad, founder of the Swedish biohacking group Bionyfiken, began organizing implant parties. People interested in becoming a walking computer would usually meet up as part of a larger conference to get their chip implanted. So far parties have been hosted in Greece, Mexico, Germany, England and the United States, with some companies even requesting the parties. Bionyfiken helped a company last year host an event where its employees could volunteer for an implant that would allow them to do things like open security doors, use copy machines and even pay for their lunch. Who needs a key card in their wallet when the key card is under your skin?!

If a rice-sized microchip doesn’t seem so scary, maybe you’re in the market for something around the size of a cell phone. Body hacker Tim Cannon had a body-monitoring device implanted under his skin with the purpose of prolonging life by tracking his vital signs at all times. The small – but not that small – green, glowing device monitors his body temperature and transmits it via bluetooth to an Android tablet. 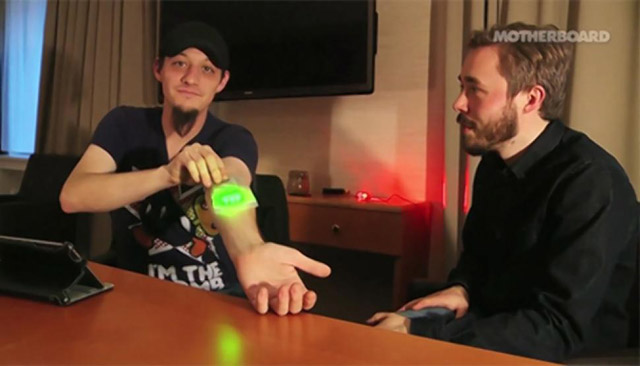 Cannon said he plans to use the data to let him know if he might be coming down with the flu or is simply over-stressed. “So if, for example, I’ve had a stressful day, the Circadia will communicate that to my house and will prepare a nice relaxing atmosphere for when I get home,” said Cannon. “[It] will dim the lights, let in a hot bath.”

Since no doctor who wants to keep their medical license will publicly go near the practice, Cannon had to ask a bodyhacking buddy to sew his in – without the use of anesthetics.

While it might seem odd, body hackers believe it’s no different than their grandmother living with a pacemaker. Alva Noë, a philosopher at the University of California, Berkeley, looks at the situation and asks two questions: is it OK to cut into human bodies for these kinds of experiments? And how much tolerance should society have for artificially enhancing the body? Noë admitted that the amateur practice of body hackers working on each other was disturbing, and couldn’t see any ethically-minded doctor taking up the practice. 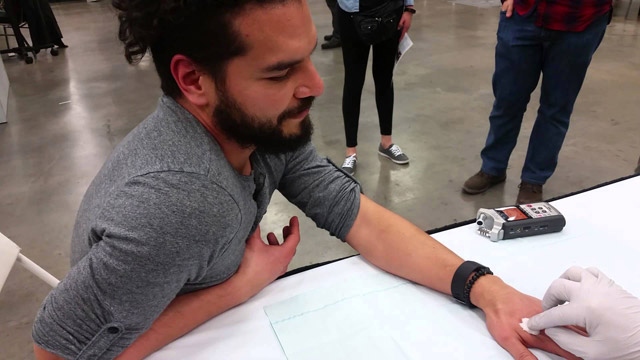 Regarding the second question, Noë feels straddles a complicated line. “We don’t condemn people for using glasses to see better,” he said. “But we do start to think taking speed to cope with your work life is questionable.” People at one time viewed smoking as an completely acceptable thing to do, and of course that’s no longer the case.

For Tim Cannon and other body hackers, this is just the next step in living a longer life. “The human body is really failing in almost every way,” said Cannon. “I want to live to be a thousand years old. I don’t want to die. I don’t understand why anybody would.”