The new school year in New York City brings with it one big change. Kids attending the public schools will have lunch served to them free of charge—regardless of income level. This amounts to a staggering number of students; now, 1.1 million children can have a hot lunch meal every day. Prior to this change, a free lunch was only afforded to low income students who qualified.

Carmen Fariña, the city schools chancellor, announced the monumental change the day before school started. “This is about equity,” she explained. “All communities matter.” Fariña’s decision marks a victory for food-policy advocates and members of the New York City Council.

Lunchtime for low-income kids can be a tortuous time of day. Many students who can’t afford the meal would prefer to go hungry than admit they can’t pay; the consequences of admitting it being often shameful. Called “lunch shaming,” the practice holds children accountable for their debt by humiliating those who are unable to afford their lunch.

This draconian policy goes well beyond New York City. Spanning across the United States, cafeteria staff are ordered to enact cruel punishments. One particularly embarrassing act involves a worker discarding a student’s hot lunch and replacing it with a brown bag containing a cold cheese sandwich and small milk—if the staff member doesn’t take away their lunch entirely. In other instances, children might have to perform manual lunchtime labor in front of their peers.

Kids and adults alike hate lunch shaming. Some call it the “worst part of the job,” while others have resigned to protest these practices. Former lunch worker Stacey Koltiska recounted in an emotional Facebook post the moment that made her want to quit. “I had to take a little first grade boys chicken and give him this “cheese sandwich,” she wrote. “I will never forget the look on his face and then his eyes welled up with tears.”

A majority of New York City public school students are low income. Prior to the policy change, about 75% of kids already qualified for free or reduced-price lunches. This shift will affect 200,000 more students; at $1.75 per lunch, it will save families about $300 a year. It joins breakfast, which has always been free.

Manhattan isn’t the first to make lunch free. Other major cities like Boston, Chicago, and Detroit already offer this sort of program, but New York is the first on such a massive scale. And for all its good, it won’t cost the city more money. Due to a chance in how Medicaid was tracked, New York was able to identify the students whose families were receiving these benefits. The amount of households was large enough to qualify them for a federal program that defers the cost.

City Councilman Ben Kallos spoke at Wednesday’s announcement and recalled his own struggles with subsidized meals. Growing up with a single mother in the Bronx, he qualified for a reduced-price lunch—a fact he was not comfortable sharing. For him, this meant no eating. “I had to choose between friends and food,” Mr. Kallos said. “I hope no child makes the same poor choices I did.” 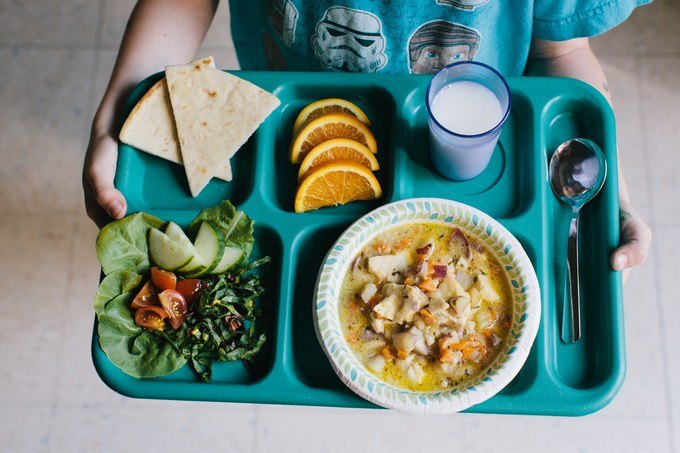