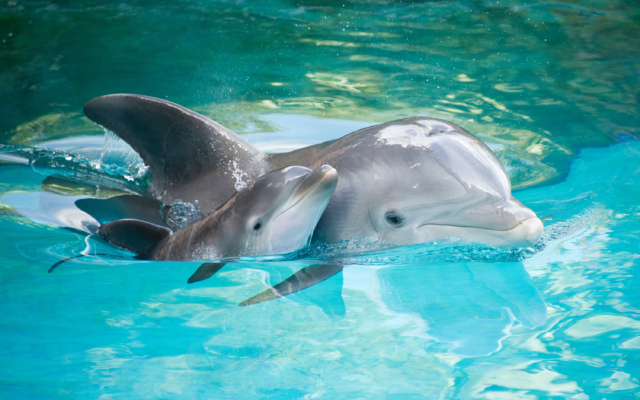 Dolphins Having ‘Conversations’ Like Humans. True or False?
Scientists conducted research suggesting dolphins have conversations that resemble human speech, but that statement is not yet unanimous.
Read More

If dolphins could talk, what would they say? Their preferred topics of conversation may remain a mystery, but Ukrainian scientists have recently conducted research that suggests that dolphins do, in fact, have conversations that resemble human patterns of communication.

Researchers at the Karadag Nature Reserve in Crimea, whose resident plant and animal life have been declared an official National Asset of Ukraine, recorded a series of clicks and whistles emitted by two Black Sea bottlenose dolphins housed in the same pool. The two companions, named Yasha and Yana, emitted a series of “mutually noncoherent pulses,” in which one dolphin remained silent as the other made noise, with the roles reversing periodically, neither dolphin emitting sound simultaneously with the other. It seems that if dolphins do chat to each other, they do so quite politely.

Lead researcher Dr. Vyacheslav Ryabov sums up his interpretation of experiment plainly: “Essentially, this exchange resembles a conversation between two people. […] This language exhibits all the design features present in the human spoken language, this indicates a high level of intelligence and consciousness in dolphins, and their language can be ostensibly considered a highly developed spoken language, akin to the human language.” Such analysis of the research relies on the assumption that these human-like pauses are sufficient evidence to declare the dolphins’ whistles a comprehensible language, simply one that humans are not (yet) able to translate.

Other marine researchers, however, are hesitant to unnecessarily anthropomorphize creatures they have long known to possess certain limited abilities for communication. Director of the Dolphin Communication Project Dr. Kathleen M. Dudzinski, who has over 25 years of experience studying dolphins’ particular behavioral patterns, notes that the mere sounds and silences of the Karadag recording do not necessarily indicate that Yana and Yasha are sharing “complex semantic information” as humans do. She addressed the distinction between “communication” and “conversation” in an article, aptly titled “Do Dolphins Have A Language?”, a full decade ago. While dolphins have a recognizable system of communication among themselves, as do nearly all other observed species, there is not yet proof that dolphins can refer to abstract concepts, objects in their environment, or events in the past or future – the capabilities that truly comprise a natural language.

Marc Lammers, an expert in dolphin acoustics teaching at the Hawaii Institute of Marine Biology, directs his criticism towards the Karadag study’s sloppy experimental design. Because dolphin sounds are directional, in the way the noise of a trumpet or trombone issues primarily from its outward-facing horn, the researchers’ decision to measure Yana and Yasha’s clicks at a 90-degree angle skews the accuracy of their recording. As Lammers explains, “it might be somewhat similar to recording a conversation by people in the other room speaking into pillows – probably not how you would try to learn a new language!”

While the general public will be eager to latch on to any purported news that dolphins can talk, prominent researchers in the field with decades of experience have one primary contention with the findings from Ukraine: Ryabov’s research is nothing new. Stephanie King of the Shark Bay Research Alliance in Australia claims that dolphins are hardly the first and will not be the last species observed to avoid “signal masking,” suggesting that Yana and Yasha’s coordinated timing is less human-like and more simply animal-like. According to Denise Herzing, research director of the Wild Dolphin Project, scientists have been aware of this ability in dolphins since 1979. If so, the Karadag team will have to get back to more dolphin eavesdropping in order to bring truly new research to the table.